“Though the market is at its entry point, India is the next 4G LTE smartphone battleground,” said Dr. , General Manager of International Sales, .

In terms of MediaTek’s mobile business, India is their second most important market and key to MediaTek’s mission to power billions of devices globally, he said.

“The market is in the state of transition from 2G to 3G to 4G and from feature phones to smartphones. It will be complete by the end of next year,” said Finbarr. 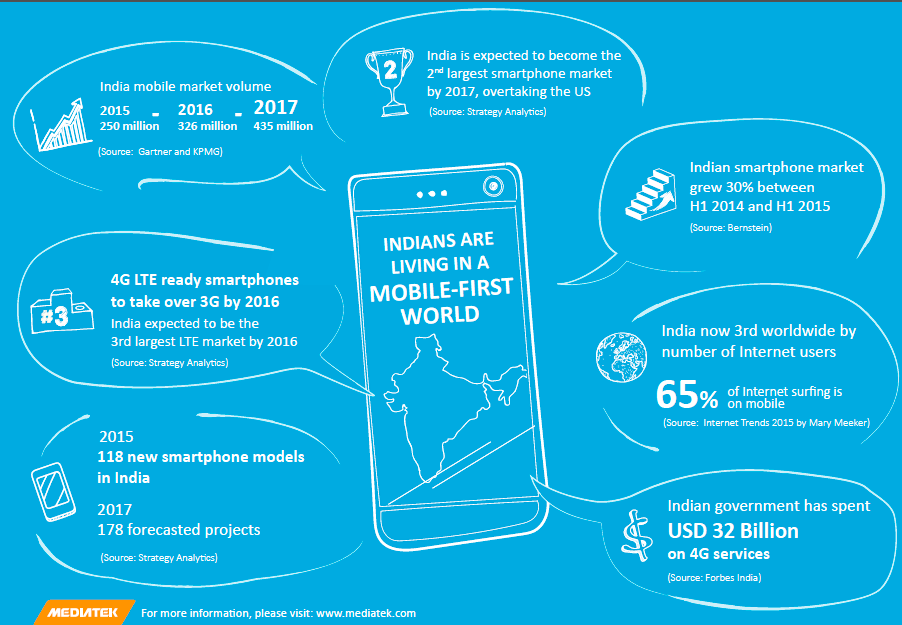 Lost in the translation of numbers? We decode them for you.

• Network: It means what it states. It is time to bid adieu to our beloved 3G forever till a scam around it comes up.

• Devices: Smartphones will totally wipe out the dynasty of feature phones by 2017. The warning is clear.

In 2015 alone, 118 smartphone models were added in the Indian market and we are only halfway through the year.

• Players: Forget the numbers; such huge digits simply prove that the revenue growth of the players in the field is a steep rising graph. MediaTek grew from $ 5.7 to over $ 7 billion globally in just one year and it enjoys a strong base of 35-40 per cent of the total share of the Indian mobile market.

What drives the market?

“Indian consumers are one of the most well informed consumers in terms of features. People here understand CPU, sensors, chipsets, megapixels,” told Finbarr.

Besides the consumers, one of the unique things about the market is the retail strategy, especially online sales and that’s been faster and bigger than most markets globally, he said.

This gives the players an edge in the Indian market as the devices which sale the most online are the higher spectrum devices.

“So that helps us to capture the higher tier mobile devices space.”

Hence, working closely with Indian brands has been one of the most important business strategies of foreign players.

If one notices a bit more closely, one would notice the sudden insurgence of foreign players like , , , Asus, with loads of their new advanced products, here.

• 65 per cent of India’s current Internet traffic comes from mobile devices, according to consulting firm Kleiner Perkins Caufield & Byer’s 2015 “Internet Trends” report. Numbers are out. Devices will roll out soon. So what is everyone waiting for? For the operators to roll out the networks. Though has started 4G and Reliance Jio might do that soon, two operators cannot cover the whole population of the country. And, Reliance is yet to resolve its tiff with Airtel. Surely, more players need to enter the game for the mere numbers to be turned into success stories.

It is the networks, operators and operator’s strategy that will fuel the market, stated Finbarr.

“We can feel the appetite of the consumers is there for mobile devices, mobile network and mobile data but it is not fully served by the 3G mobile internet service that is there.”

• The next big challenge would be the price. With 4G upgraded handsets, the average selling price of mobile handsets is going up. To target a larger population of the Indian market, one needs to penetrate Tier II and Tier II cities as well and that would only be possible with smartphones at a much cheaper rate like feature phones.

• Last but not the least, educating consumers about using a smartphone should be the next big target of the evolution. ’s initiatives like Giga Geek and Smart Class do help.