Aon Hewitt Report: Here's how Indian companies across sectors are looking at salary increases for their employees in 2016 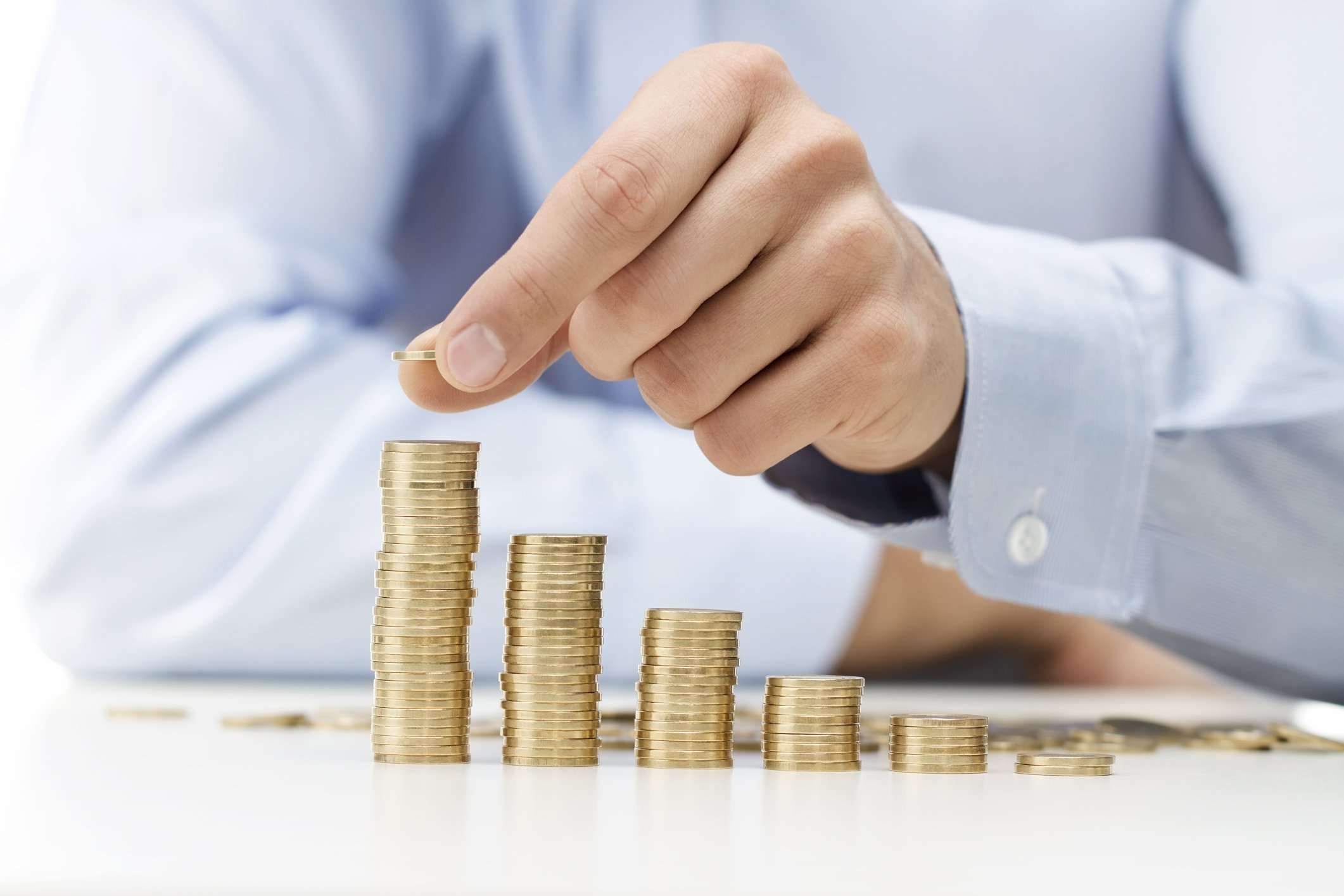 India is entering the era of the ‘New Normal’ in salary increases, as per the 20 th edition of Aon Hewitt annual Salary Increase Survey in India that was released on Wednesday.
Advertisement

The data, collected at the same time companies do their budgeting for the next year every year, shows that in the last 10 years, there have been fluctuations in the way companies have been looking at pay increases. However it’s shown stability over the past five year.

Let’s take you through such and many more key insights that the Aon Hewitt's recent Salary Increases report reveals, and tell you what it means:

Advertisement
"The trend therefore shows that the salary increases are becoming much more range bound, operating between 10 to 10.5% and showing a marginal decline this time around at 10.3," ​says Anandorup Ghose, Partner – Talent & Rewards, Aon Hewitt Consulting. 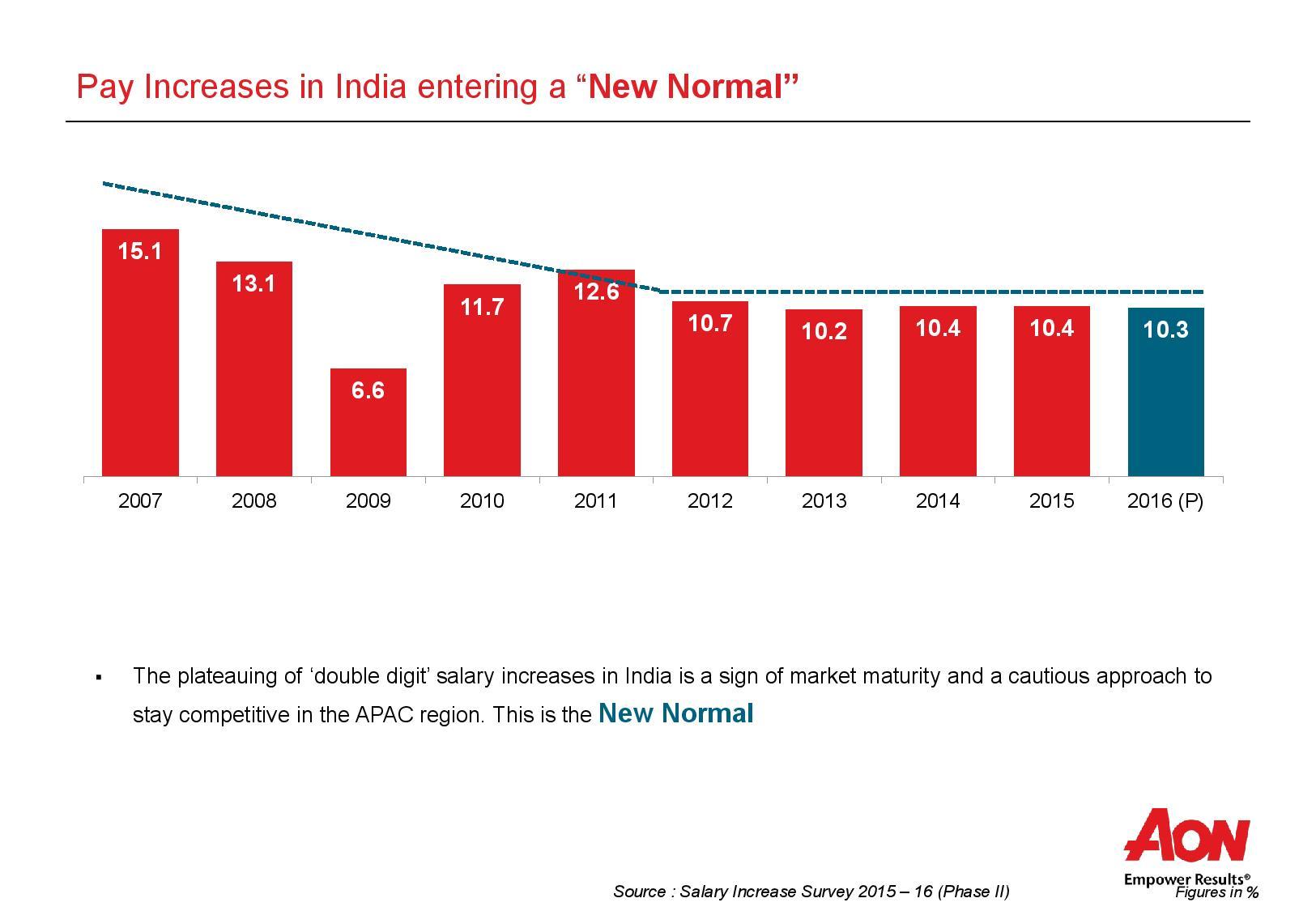 This is the new normal Aon Hewitt’s recent report speaks about which will what the companies are going to look at while deciding pay increases going forward.

“We do not expect that this pattern that you see today will change very significantly going forward,” says ​Anandorup. 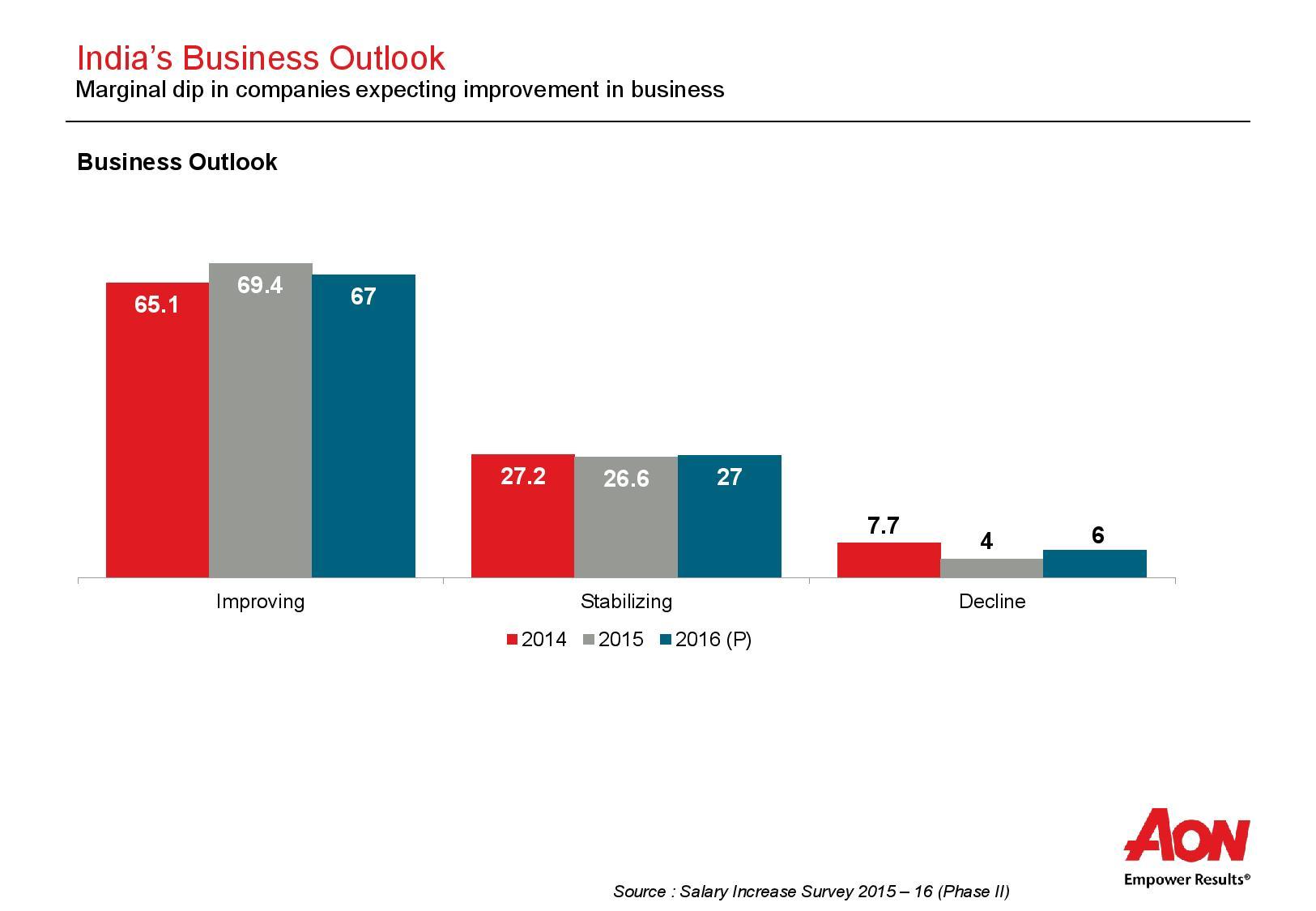 Advertisement
In Feb 2014, when the government was changing and there were fresh hopes, 65% companies felt that business conditions are going to improve. In 2015 January, about 7 months into the new government, more companies felt it would improve with the percentage going slightly up to 69.4%.

However, 24 months on after the government change, there has been a slight decline in terms of expectations of improvement. On the other hand, there is slightly higher percentage expecting an actual decline in the improvement in business.

"A similar situation was encountered back in 2013-14. However, 2014-15 saw 68 per cent saying that their budget will go up which has now again come down to a 50 per cent. Top reasons for low budgeting have been found to be concerns over fluctuating economic conditions. This is the macro environment in which companies are looking at salary increases," he adds. 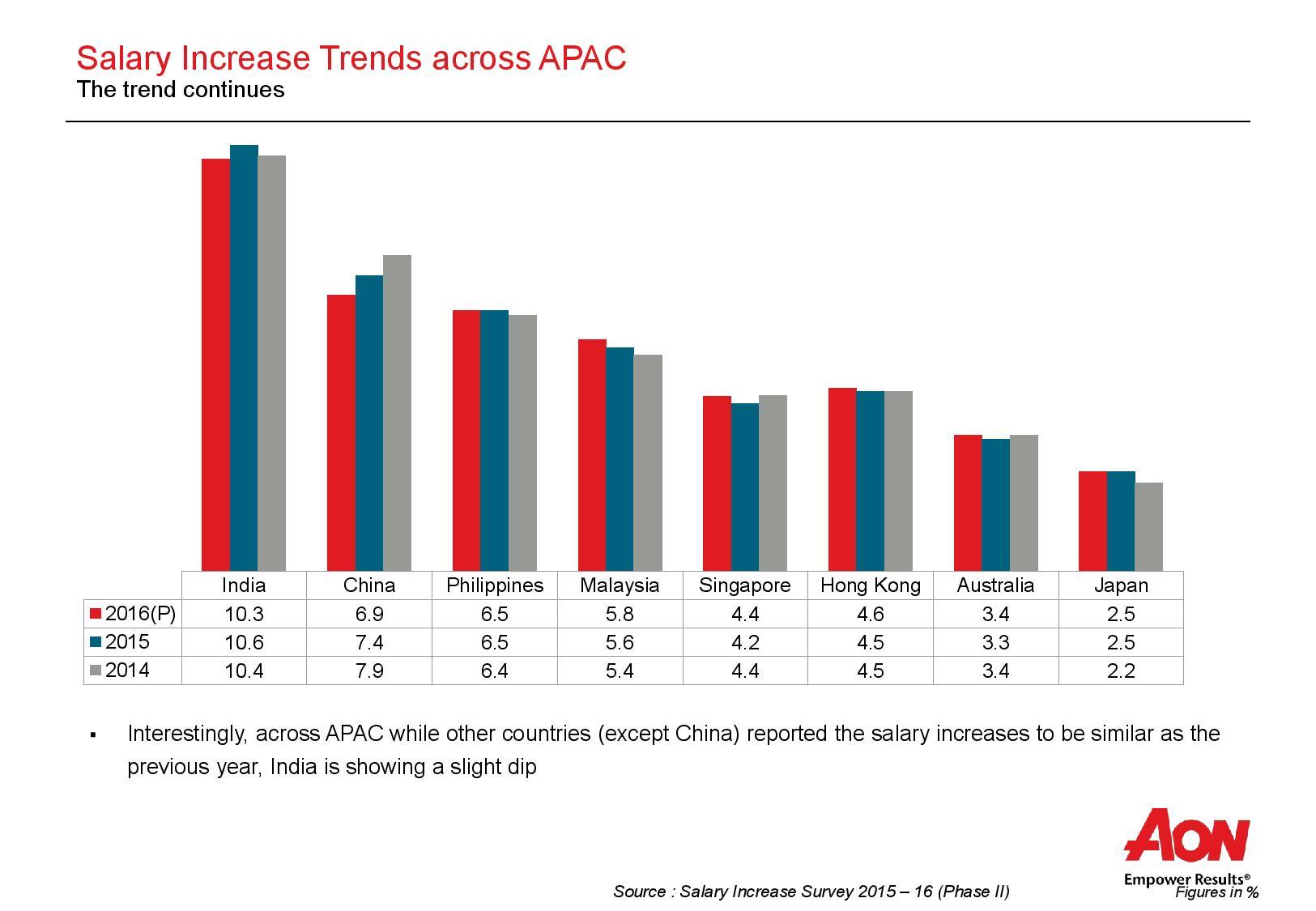 Advertisement
India at an average across industries stands at 10.3 per cent which is across the Asia Pacific region the highest salary increase being offered. This is a trend since last 10 years despite times when Chinese or Australian economy grew.

SALARY INCREASES NOT A FUNCTION OF GDP/CPI

“If you take a shorter time span, post 2009 to 2016, you will find that more correlated to growth than CPI. In some sense, this year is a repetition. Inflation is at an all time low. Some would argue that it should lead to salary increases, but that’s not necessarily happening,” says Anandorup. 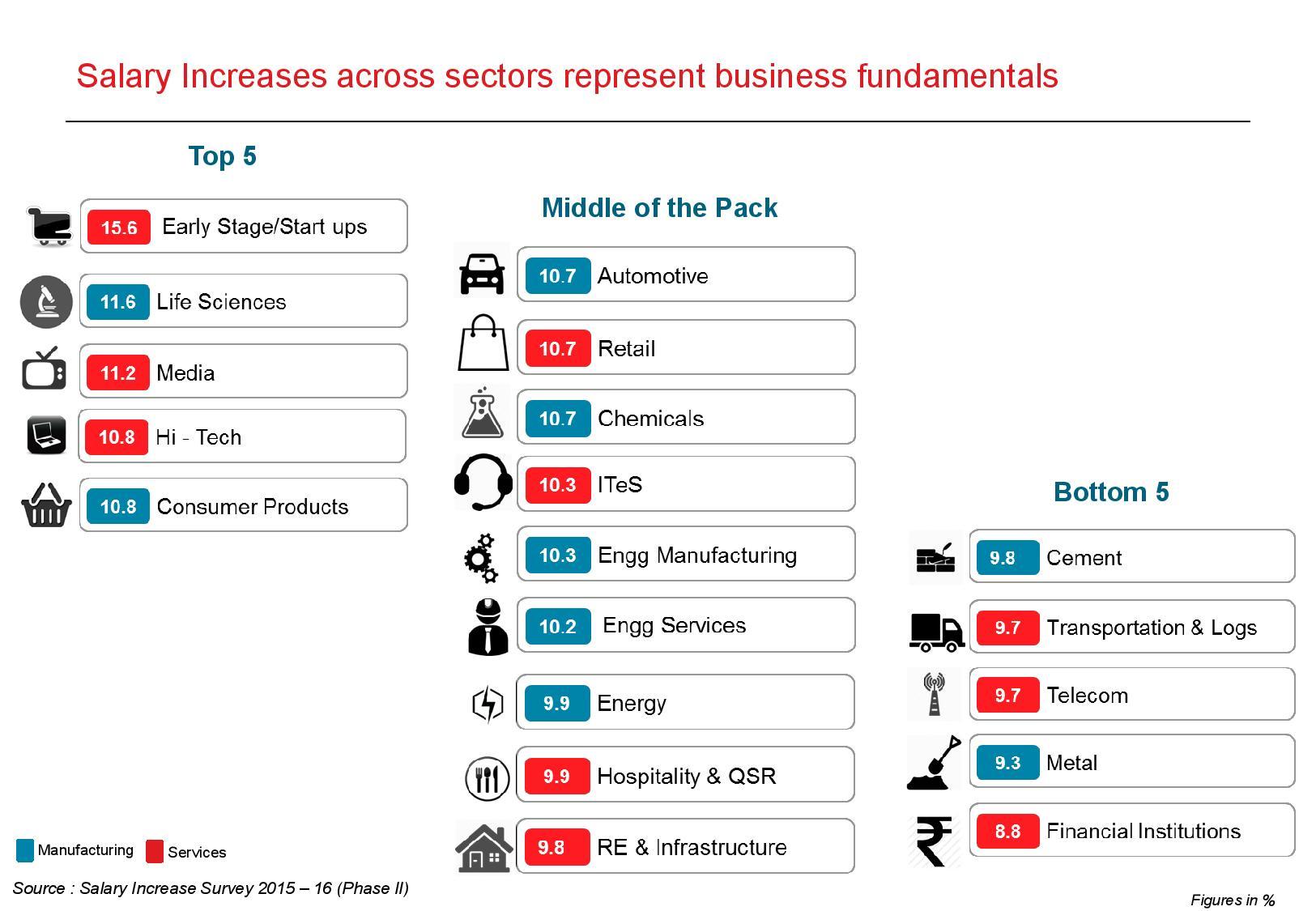 Advertisement
At 15.6 per cent, early stage startups are giving the highest salary raises. Life sciences is up next which leads the top of the bracket for almost 5 years now after e-commerce. Within Media which is looking at 11.2% salary increase, Entertainment is at the higher end of the spectrum while news at the lower end.

Hi Tech at 10.8 per cent is to some extent surprising. For most tech companies salary costs form a higher component of their business. At 10.8 per cent, they are taking their costs further up.

Also, a large part of this number is driven by product companies (the likes of Oracle and Apple) and semiconductor companies. They are looking at salary increase of 12% while Service cos (likes of TCS, Infosys) are at much lower end, at an average of 9%.

At 10.8%, Consumer products for the last five years has held steady. Whether it’s in the top 5 or bottom 5 has been governed by other industries going up or down.

10.7 in retail - It is because the value retail chains like Shoppers, Spencers, are at the lower end of the spectrum, while the single brand retail, high-end fashion brands are pulling up this number.

Advertisement
Meanwhile, if we look at the bottom 5 - cement prices are at an all time low as of now. Financial institutions have been facing big challenges as far as their salary increases are concerned post 2009.

COMPARING 2015 and 2015: MANUFACTURING VERSUS SERVICES 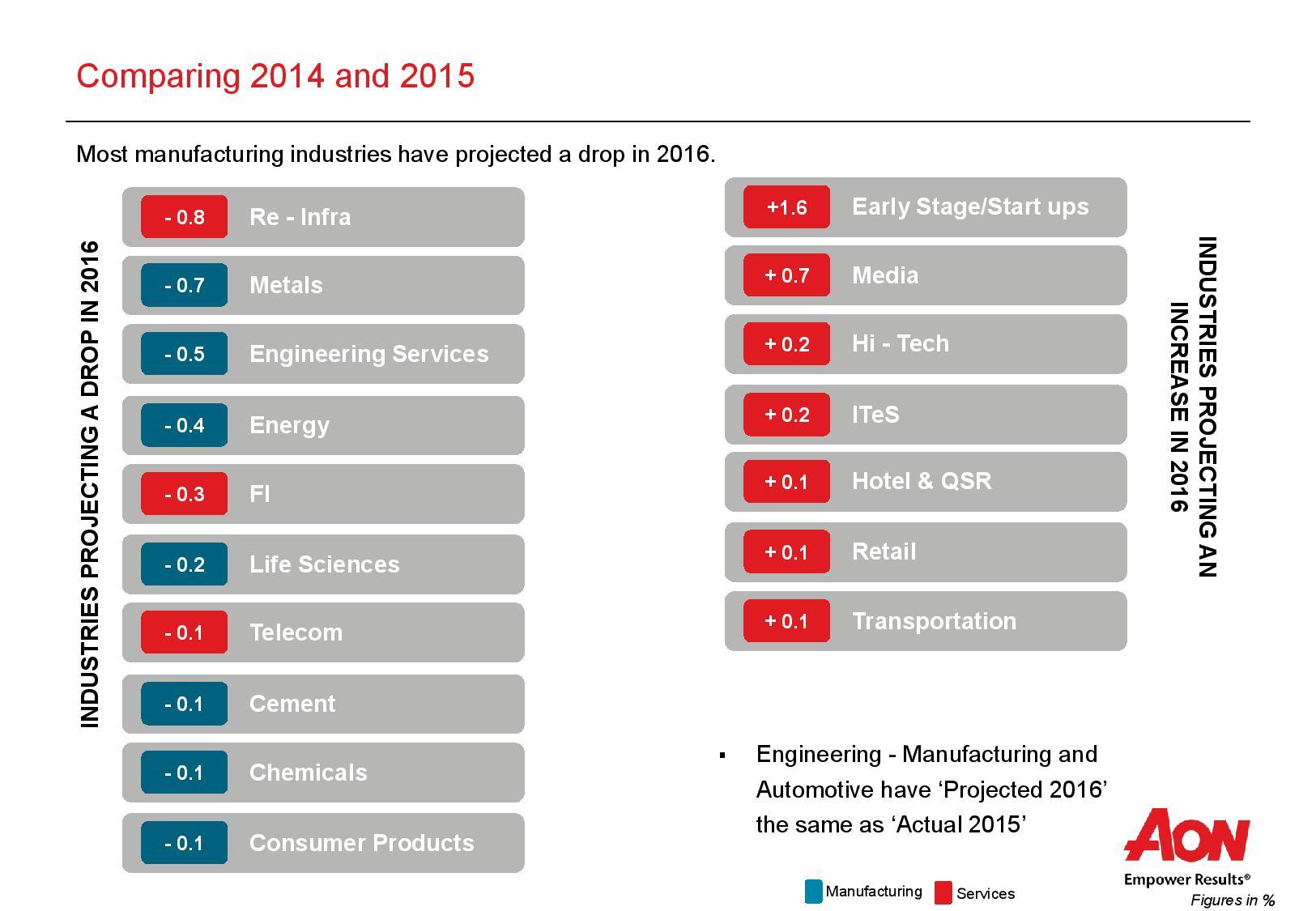 Most manufacturing industries have projected a drop in 2016. Meanwhile, service companies have recorded a rise. This trend is different from the past year when manufacturing said it would be increasing salaries. The manufacturing now going down and the services going up will narrow the gap these two sectors have seen.

Moreover, in services sector, except for early stage startups, all other numbers are fairly small. Startups therefore are driving the change.

INCREASING FOCUS ON TALENT AND MERIT 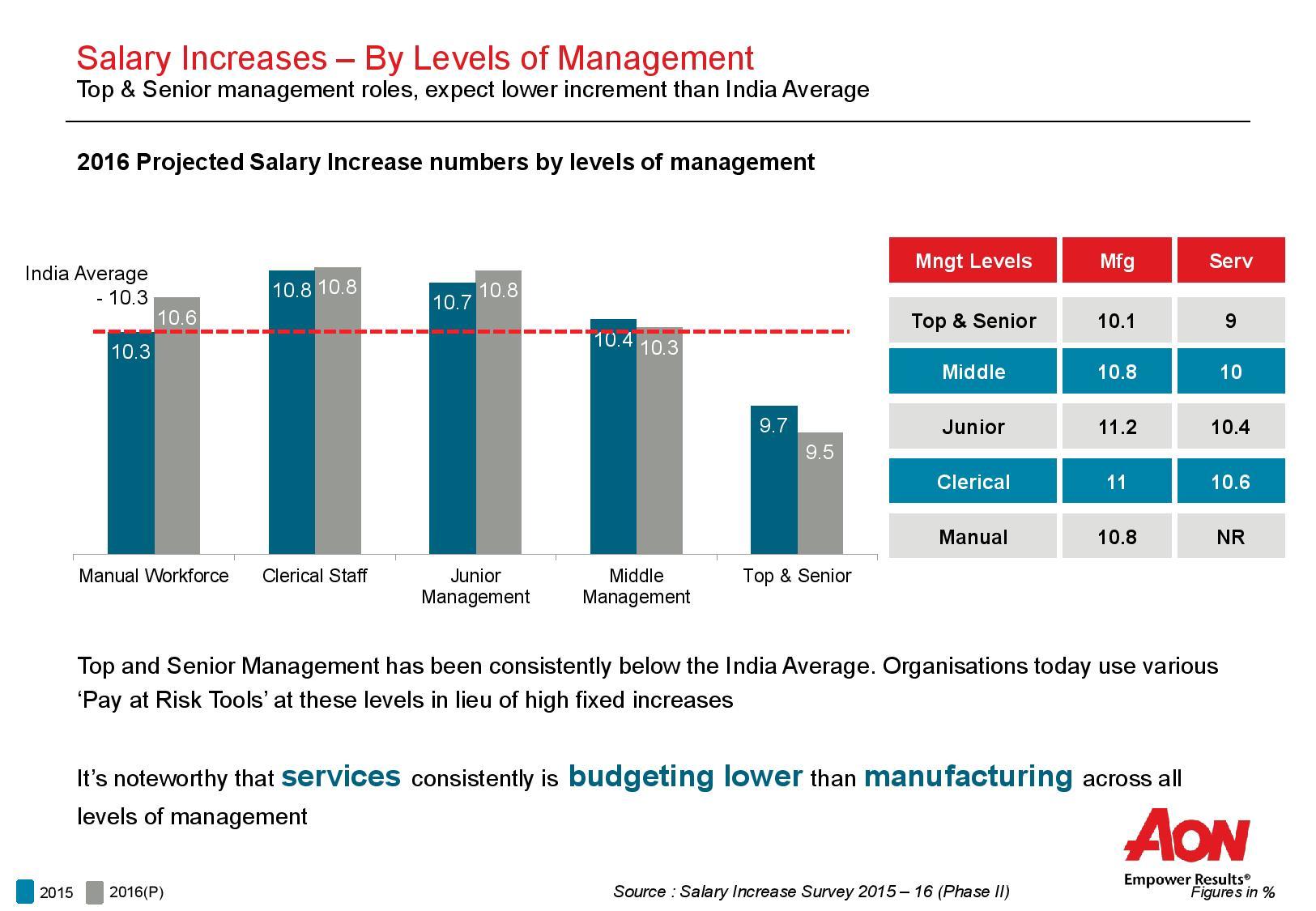 Advertisement
"Over the last 15 years there has been distinct shift in the ability of companies identify top talent. What this shows is India’s capability to identify distinguished talent and compensate them has significantly improved," says Anandorup.

Over the last few years, while employee expectations have gone up, Aon Hewitt’s data shows that companies are managing these higher expectations carefully and are not getting swayed by it. The focus on performance differentiation is far higher with a larger proportion of budgets being allocated to higher performers.

Investing in key talent emerged as a major trend. Key talent would mean high potential and hot skills apart from high performers. The payout gap between an average performer and key skills is growing year on year. At 63%, this is the highest differentiation India Inc. has observed.

Additionally, in the last five years, the percentage of employees with top performance rating has dropped by close to 30%, implying that organisations are not hesitating to differentiate sharply on the basis of performance and are allocating the share of the total increase budget accordingly. India places 8.2% of its overall population at top rated. This number has significantly dropped in the last five years.

Anandorup Ghose commented: “At an average pay increase budget of 10.3% across India, HR managers will be pushed to ensure they are being more innovative and thoughtful in how they reward their top performers while ensuring they are able to retain and motivate the rest of the organization as well.”

Advertisement
ATTRITION AT ITS LOWEST FOR FIVE YEARS 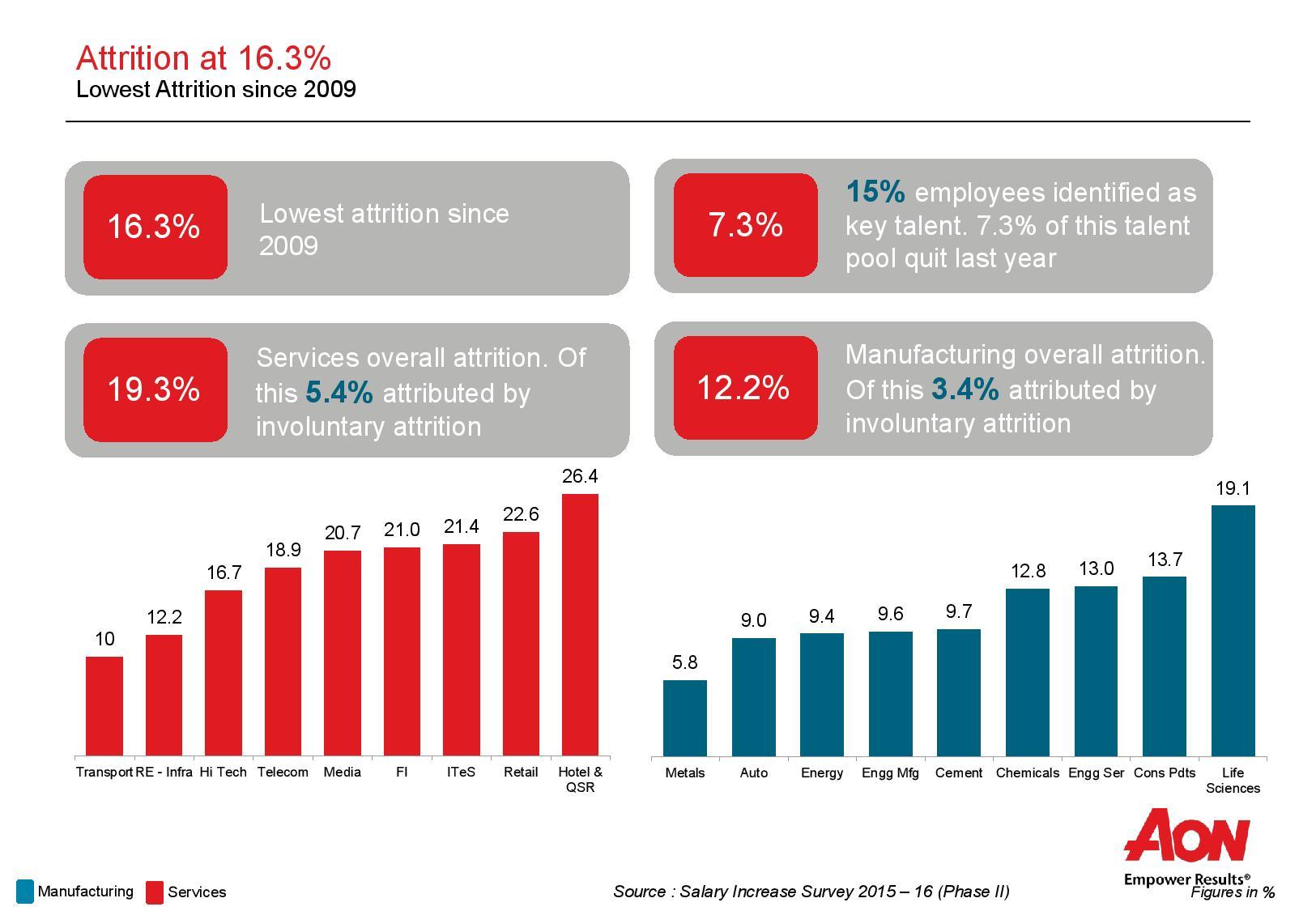 The attrition rate in India is dropping. At 16.3%, it is the lowest that corporate India has observed since the 2009 financial crisis. While attrition was controlled at a broader level, key talent attrition increased from 5.9% in 2014 to 7.3% in 2015. Increasingly organisations are developing separate retention plans and policies for their top talent. While Rewards continues as a retention tool to ring fence top talent, programs around leadership opportunities and coaching, overseas assignments, fast track programs for hi – potentials are fast gaining prominence.

- There is a definite new normal in the way organizations are looking at pay increases. There are no large spikes or drops. They have been falling in the range if 10 to 10.5 per cent and can be predicted now.
- Across APAC region, India continues to the best in terms of pay increases.
- Better performers are earning significantly more than average. This is reflecting companies’ maturity.
Advertisement
- There’s significant divide between manufacturing and services in terms of pay increases. The gap is declining now.
- Attrition levels are at the lowest. It helps HR and companies manage this new normal better. You don’t necessarily give high pays. Companies are more comfortable by giving low increases and providing benefits.