Brand Narendra Modi: Here Are 10 Business Lessons For All 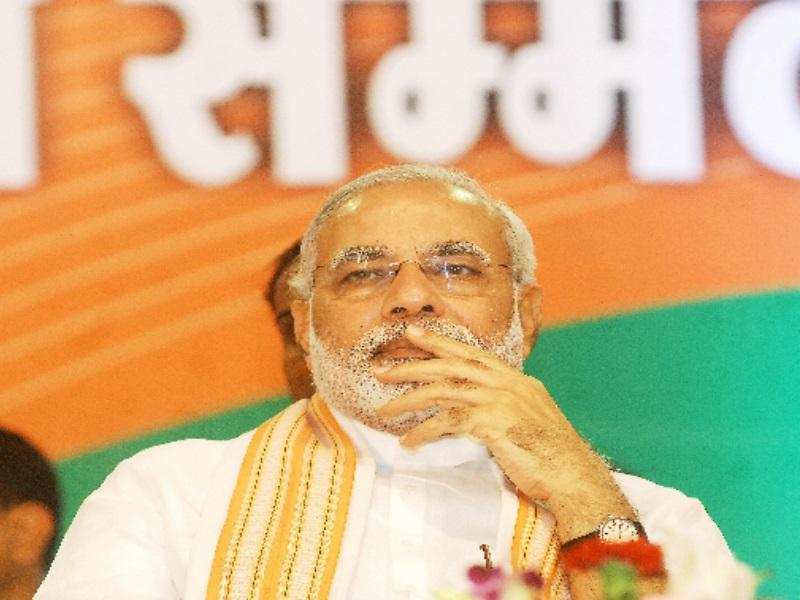 His is a perfect rags-to-riches story. Only, the riches here mean the highest seat of political power corridors – the seat that seals the fate of billions of Indians. When started on his brand-building exercise, there was hardly any state in the country – apart from Gujarat – that was a huge fan of this bearded-bespectacled man. The change didn’t come overnight either. It happened over years through hard work, strategic planning and positioning along with consistent PR efforts that beamed the image of the man.

Today, there is hardly any youth who does not admire or adore him, or even vehemently criticise Narenda Modi for his persona and works. But, what is more important is whether someone likes him or not, they just can’t ignore him. Even to oppose his decisions and stances, one has to be well-informed about his persona and preferences. So, in more ways than one, keeps his opponents also fully occupied with information regarding himself or his style of administration.
Advertisement What makes ‘brand Modi’ much more endearing and successful when compared to others? In more ways than one, Modi has brought the same fresh wave into Indian politics that Jawahar Lal Nehru, or Indira Gandhi or her son Rajiv brought during their respective elections.
A few takeaways from brand Modi to understand the ‘business and management’ side of his personality, may well be worth. Remember, this is in a nutshell and it is difficult to hold something like this in a nutshell. We might need a few hundreds of them to explain in proper terms.

'No’ is the word
To say no, when you are in public life, is the most difficult task but not for Narendra Modi. He says a firm ‘no’ when he’s asked to spend time on things that either don’t require his attention or don’t deserve his time. Without further negotiation, his party workers continue to do their jobs!Saying no is not rude. It’s a time saver. And when you save time, you also save money, energy and creativity that can be invested in something that promises better potential.

Advertisement
Be dynamic, but stay firmly rooted
Every living being changes with time is. Whether it is animals adjusting according to weather, or humans according to their conditions; change is the only constant and thus, is inevitable. Modi accepts change without resisting, especially when it promises the treasure of better times ahead. That does not mean he is not rooted. He is still as loyal to his morals, values and upbringing as he was earlier. And that’s what guides his spirit.

Stay open to the path ahead
Closed to change would necessarily mean missing all that lies in the future. Modi is a big dreamer who looks at the future with a lot of optimism. Hence, staying open about the future is essential. Old has its value too, but the new holds promise. We owe it to ourselves, if none else!
Advertisement Time and perseverance
Dreaming isn’t a crime. But, not working towards realising your dream is indeed a crime. With his humble background and basic existence for a long time, Modi did show the country that a tea seller can surely keep the senses of the country stimulated in anticipation of better times. A small company without dreams will stay just that. A miniscule idea with enough support and hard work put in by members to grow, has sky for its limit.

Counter the situation; don’t quell it
Staying a mute spectator when someone has the chance to walk all over you is only a step towards finishing yourself. Don’t allow situations to get out of hand that can seriously damage your future. Speak up, even if you feel weak. You never know who’s listening!
Advertisement Know your customer
Empathising with your customer/voter beyond the call of duty only ensures the bond is there to stay. Else, a touch-and-go approach will remain just that. If you need to have a customer who is going to speak ‘for you’, your reputation in the market is just getting rock solid.

Time is premium
Whether it is being open to change, or being open to ideas that would usher change, time assumes a lot of importance. Sometimes, tough decisions like sending out underperformers may be inhuman, but inevitable. When faced with such challenge, a man turns spiritual. Don’t be. Just focus on getting the job done within time, and leave the rest to fate. Sometimes, hard times have also brought some great moments to people.
Advertisement Reduce the clutter
Dead wood can’t stay. Period. Reason, time is what carries the premium value and deadwoods can only consume time without contributing much. If you have the power to do away with the clutter, do it. Else, just have all the creative minds focus on the result, and you can then negotiate on your terms once you have reached the goal.

Stay undeterred
Single-minded focus is the need of the hour. Bracing self to face bitter criticisms for larger good is always better than hearing sugar-coating words that won’t help you introspect.