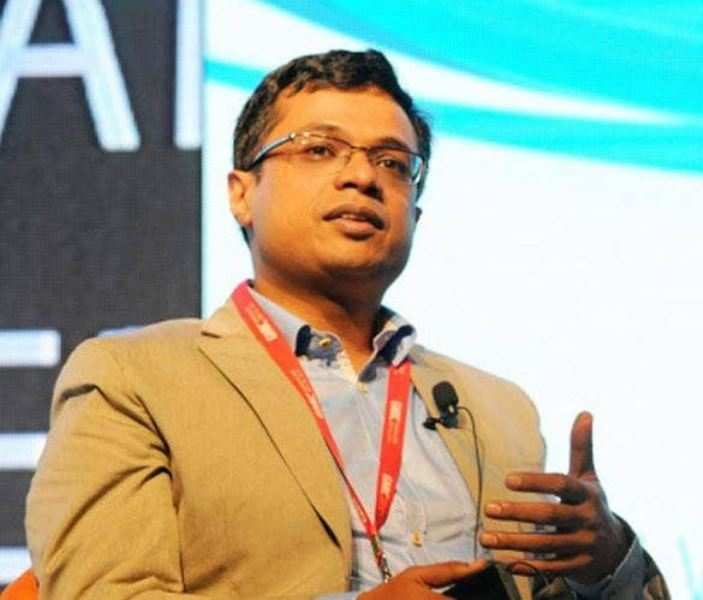 He is no longer the CEO of India’s biggest online marketplace, but who cares! He has built a billion dollar business, has topped the list of India's most wanted entrepreneurs in 2015, and most importantly look at that queue for selfies! Even the organizers want some. That’s when you know he’s a star.

Business Insider got chatting with former-CEO , much to the disgust of the ringing phones, lapel mike and white balance sheet holders. Sorry Boss, but we had to do it!

Life post-CEO
Advertisement I still have a pretty active role. I’m just 34, so definitely not a full-time ‘mentor’. My role might be slightly more external facing than before, that’s all.

I’ll be focusing on shipping the ecosystem outside, working with industry peers and so on. I am also jointly looking at strategy with Binny. I’m also keeping an eye out for key investment areas, expansion and acquisitions for Flipkart.

Advertisement
We’re constantly thinking about what category to expand to next. I was looking into that ever since we started. We’re also building a lot of warehouse space for our sellers.

Any target for Profitability?

We don’t have any timeline as of now.
Advertisement The market is big, and we’ll continue to grow the business. It still requires more investment. That’s what we’re focusing on right now. We’re not so much worried about profitability.

These are complete rumours.
Advertisement Any plans of launching Physical stores?

Plans to list in India
We don’t have any specific plans as of now. However, we’ll what to be a public company sometime later. Advertisement
On what best defines Flipkart

It’s a digital-first, customer-first company. We spend our time trying to understand and solve customer problems creatively. Also, although we’re small, we believe in audaciousness.

It shows the right intent from the Government’s side. They’ve recognized startups as one of the focus areas. We’re ready to contribute in whichever way we’re asked.

Stand on Net Neutrality Advertisement
I’m a big supporter. It’s the reason why we’ve come up, really.
The Internet shouldn’t be made partial, ever.

His role as an Investor
Advertisement I’m going after people who’re after big ideas. Big ideas excite me.
India is amidst a big transformation in terms of smartphone penetration. Our country has a lot of problems, and the Internet can be used to solve a lot of these problems.

E-commerce is an unfounded sphere. It’s growing, but is still very small in India. E-commerce is at 8-10%, even in developed markets. Advertisement
Vision for Indian E-commerce

E-commerce will solve a lot of access problems for a lot of customers. It’ll also sort problems of sellers and brands to reach out to customers across India.

The E-commerce edge: Advertisement
By bringing down the cost of supply chain, we’re able to give access to a large number of consumers at a very low cost. Brands and consumers also get access to large consumer bases. That’s the big value we provide.

His idea of Success
It’s a measure of impact. If you’ve gone from 0 to 1 in terms of impact, you’re successful. There’s no end, just a journey.
Advertisement Message to Young India
Constantly have a goal to grow bigger as times progress.

Message to Young Entrepreneurs
Be focused on what you want. Stay true to your mission. There will be difficult times, but you must constantly focus on what needs to be done to move ahead. That’s most important.
Advertisement (Image: Indiatimes)