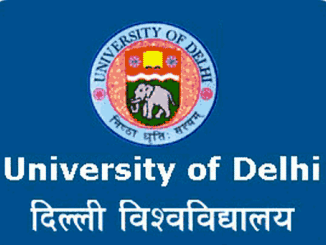 Advertisement
​When the started in the this July, a significant ‘’ was about to happen. The topmost of the country had shifted to a (popularly known as the ), as opposed to the previously existing . Adopting a credit system, the move split the academic into () that were common to students across different streams, () or major courses, () or minor courses and . also gave students the option to have by awarding a diploma at the end of two years, a at the end of three and an honours degree at the end of four years.

In spite of protests from various sections of the university against the change, the administration went ahead with the move. Before the session began, Dinesh Singh told the Times of India about a possible danger of the first batch becoming ‘guinea pigs’ to an . So at the end of one semester, has that fear come true?

The () asked the staff associations of various colleges to provide regarding the new system. A total of 47 responses came in and it was found that 44 colleges voted against the FYUP. The three institutions supporting FYUP were , and (Morning).

Teachers from the , along with many others, believe that the additional one year in FYUP brings no value addition to the degree.

However, teachers from Kalindi College think otherwise. According to them, the scepticism regarding FYUP’s success is no longer there as both teachers and students are now witnessing its strength. “With the objectives of interdisciplinary educational framework, FYUP itself tells the story of its success,” they said.
Advertisement

But the major concerns voiced by other colleges include , , and tied to the change. We list these concerns:

Key problem: Foundation Courses
The FYUP features 11 Foundation Courses ranging from , , , , and IT – spread over the duration of two years. The break-up of the first year places 67% of the weightage to these blanket courses.

The issue lies in the fact that most of these courses happen to be a repetition of what students have already studied in 10th grade. Moreover, several concerns have been reported about the content, with the at labelling it as “replacing critical engagement with top-down dissemination of right-wing discourses.”

The evaluation of these courses has sparked debates as well. Contrary to the usual scheme of things, FCs have 55 allotted to and only 20 marks for a . This is further split into group discussion and PowerPoint presentation. With more than 55 marks left to a teacher’s discretion and around 100 students to evaluate, there is a chance for and it is not a fair approach, according to some teachers.

Advertisement
Moreover, the 20 marks for are to be evaluated by the colleges internally. There is no central examination as opposed to the rest of the subjects. Students and teachers believe that this keeps room for disparity in the evaluation across colleges.

The course that involves translation exercises requires the teacher to be proficient in two or more languages. But pointed out that in this case, the default sources and target languages are Hindi and English. The college thinks this is discriminatory as far as non-Hindi speaking students are concerned. According to the broad concept, the translation can happen from any language and not just Hindi, but having teachers who are proficient in multiple languages is not something that one comes across everyday.

Taking forward Miranda’s argument that 12 courses could not be made compulsory for all students across varied streams, suggested that there should be department-specific FCs. Aarushi Malik, a Management Studies student from Maharaja Agrasen, agrees. “At the university level, I would rather study courses that are connected to my core subject.”

Similar concerns were reported by Hans Raj College who said a Foundation Course on did not make any sense for a student of in . Instead, students could have fruitfully utilised this time to study a main course.

A course without credit: ,
The FYUP also introduced a paper on called Integrated Mind, Body and Heart. Authorities at pointed out the limitations of a non-academic course and said, “A course like Mind, Body and Heart had no exam, no requirement and a very loosely structured coursework. Consequently, in spite of best efforts by the teachers, it was difficult to keep students motivated beyond a few classes. Attendance for this course is very low and students prefer to use this time to complete other which carry marks.”
Advertisement

Core subjects at the losing end
The academic concentration of Discipline Courses-I is reported to be headed downwards. Teachers from (SRCC) stated, “The paper in the commerce stream has suffered in terms of depth and rigour, compared to the Honours papers in the three-year scheme. Similar grievance has been raised by teachers of both the DC-I papers in the stream.” Similar concerns were reported by the rest of the colleges as well.

“Core computer science papers in the newly introduced B.Tech. in Computer Science under FYUP have been reduced to 50% of what they used to be in the earlier Computer Science Honours programme,” said the authorities of Hans Raj College. “This denies a student the chance to gain knowledge and expertise in his/her field of specialisation.”

Infrastructural limitations
While the additional year means additional infrastructural requirements, there are issues greater than space. For instance, reported that its infrastructure is highly inadequate for the allotted in the Foundation Courses. It has only 4 equipped rooms and the total number of students in the batch is 1,300.

Authorities from mentioned that in a situation where there are not enough classrooms to sit, how is it possible for students to work in groups?
Advertisement

and workload
With general degree courses such as B.A. or programme out of the picture and other courses such as the , and being put under an umbrella course called (), the workload is not equally distributed. Some departments now have less work while others are overburdened with classes.

The staff association of pointed out that two departments of the college are facing a reduction in the workload since they no longer offer honours/DC-I courses.

With students having multiple exit points, the uncertainty in the workload seems to be an inherent flaw. Teachers from said, “No new appointments are permitted by the UGC for FYUP and calculations for appointments are done based on student-teacher ratio. Hence, the impact on workload is such that it presents no increase in workload when compared to the 3-year annual or . Further, no exact impact can be calculated due to uncertainty about exit points in the second or the third year. The workload calculation will fluctuate from year to year and semester to semester, creating further instability, it seems.”

Moreover, authorities at (Evening) reported that evening colleges find it difficult to run the FYUP due to paucity of funds.

Advertisement
Looming uncertainty over
The hurried implementation of the degree means teachers were uncertain about several issues in the beginning and continue to remain so even today. The evaluation scheme of the Foundation Courses was declared in September, 2 months after the start of the semester. Moreover, as recorded by the teachers of Miranda House, till date, it is completely unclear as to how the students will be allotted DC-II and AC courses. It is not clear if the colleges will allot DC-II and AC courses as per a student’s choice or will restrict the number of students in a particular DC-II/AC course.

Laptops
has come up with another unique offering for the students – a laptop. FYUP students are entitled to an HP Probook 445 G1 with Ubuntu onboard, free of cost. The move has been made to bridge the digital divide and enable students to adopt digital technologies for the projects and presentations required for Foundation Courses.

However, several colleges received the systems extremely late with a few institutions, such as , receiving those after the evaluation for the Foundation Courses had been done.

The international factor
It is also debated whether these changes have been made to help bring in foreign players in the market. The said, “It is amply clear to all teachers that the recent restructuring has only downgraded the quality of and will help promote and in India. , a fragmentation of the University and PPP model, seem to be in the offering.”
Advertisement

A will also enable students to apply for a in countries like the US that usually don’t accept students with three-year degrees.

Other Indian universities to follow
Other Indian universities are also following the league and going beyond the – the 10+2+3 concept. had replaced its three-year B.Sc. degree with a four-year B.S. programme in 2011. And it plans to extend this change to the rest of the courses in the next academic year. Officials from the university recently visited the DU campus for this purpose. Although the current B.S. programme conducted by Bangalore University has interdisciplinary courses in subjects such as Language, Environment and IT, its evaluation process focuses more on the theoretical aspects, with 80 marks set apart for a theory paper.

The also offers a in Science, with an emphasis on research in the final year.

What happens next?
Dr Subodh Kumar, secretary of the Staff Association of Maharaja Agrasen College, believes that the system need to be given some time. “We did not review the three-year undergraduate programme for several years, and we want to review the FYUP after six months of implementation. We are arriving at hurried conclusions.”
Advertisement

, , says, “The executive of DUTA has met and passed a resolution demanding the rollback of the FYUP. We are also collecting feedback from students and would make that public soon. Once the semester examinations are over, the prime aim would be connecting with students and their parents.” The DUTA believes that even the current batch of FYUP students need to be ‘rescued.’ It is proposing an alternative where the rest of the foundation courses are scrapped and the DC-I and DC-II courses are moved up. In this alternative model, the applied courses, along with other secondary courses, will be moved to the fourth year.

As the students write their semester examinations, the reflection of the past few months shows several flaws within the newly defined system. So when the vice-chancellor’s office says that “the feedback received after in-depth interaction with the faculty lasting over several days is that the new methodology of learning is bringing about great dividends,” it is a statement that needs to be questioned.

With the future of students depending on this ‘experiment,’ the authorities need to declare their plans of reacting to these ‘inferences.’
NewsletterSIMPLY PUT - where we join the dots to inform and inspire you. Sign up for a weekly brief collating many news items into one untangled thought delivered straight to your mailbox.
CAPTCHA: