Here’s a service that’s a blend of Zomato, Flipkart, Uber and every service you find online and offline 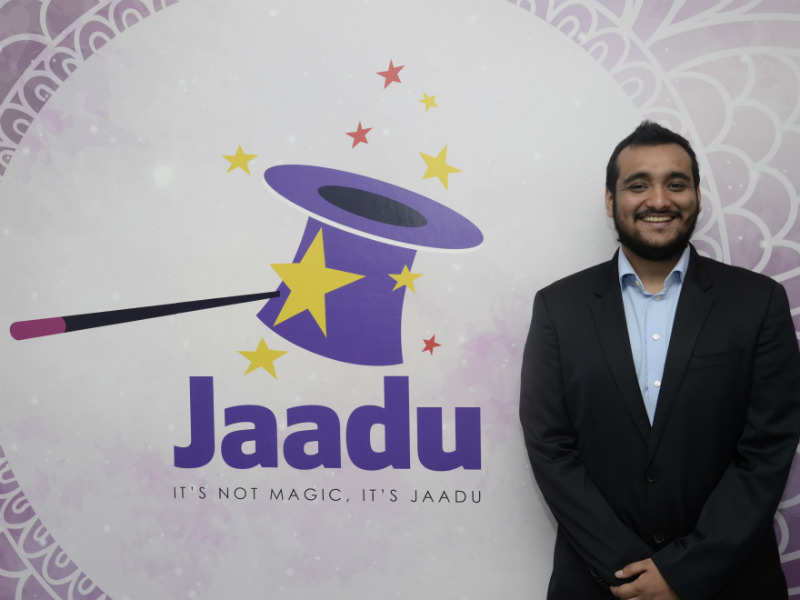 What if you could text a number or just ping a page on and get anything you want?

That's the only goal of a new called , a text-messaging-based concierge service that promises to pull strings, place orders, and schedule deliveries all so you don't have to.
It doesn't have a dedicated app. It instead exists as a phone number nestled inside your contact list, acting as your go-to &quot;guy&quot; for anything (legal) you may need.

Here&rsquo;s the list of some crazy things you can get Jaadu to do for you Advertisement
&bull; Get a document signed from 30 people located at different locations in the NCR.
&bull; Created a Rent Agreement for a customer. (From filling agreement form to police verification, we did it all)
&bull; Parcel picked up from railway station and dropped at Airport (extremely time sensitive)
&bull; Searched for the particular dress for 1 year old kid in the mall and got it delivered.
&bull; Created a Bouquet of 30 Balloons and Chocolates.
Advertisement
&bull; Delivery of gold
&bull; Delivery of live lobsters
&bull; Home cooked food delivered on a train
&bull; Creating a cake out of doughnuts and singing happy birthday to a customer

So here&rsquo;s how you use Jaadu Advertisement
Once you text Jaadu (on 098188 84394) or message them on their Facebook Page with what you're looking for, one of its operators will ask any follow-up questions (when do you need those roses delivered?) and then get to work to make it happen. 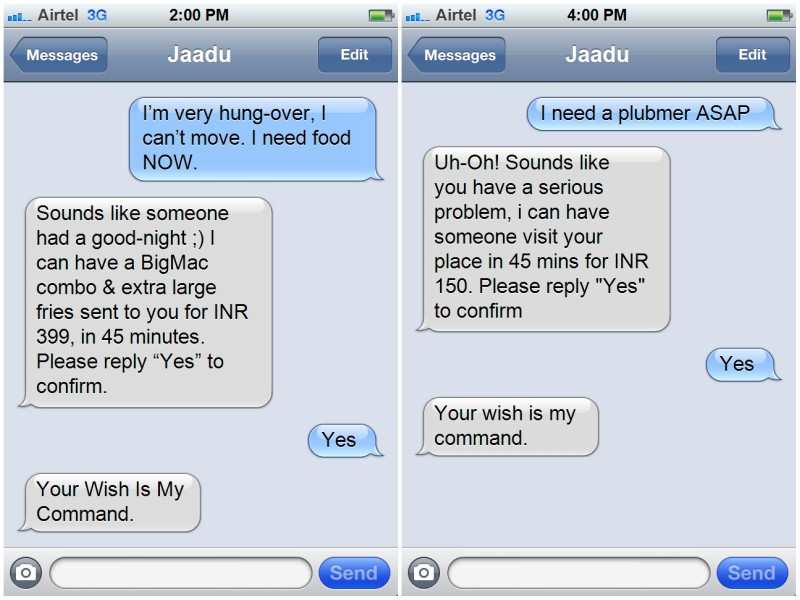 Jaadu operators are available 24/7, so you won't have to worry about texting Jaadu late at night. Be it a &lsquo;Cigarette Emergency&rsquo; to sending gifts to your girlfriend at 12am sharp, this company is making everything possible.

How do they earn from it? Advertisement
They have a consumer facing delivery, service charge and commission(s) from vendors.
Also, they have additional side models such as advertising and will be rolling out premium paid features soon.

How fast can they deliver?
Advertisement We tried Jaadu twice to check on its timing and consistency. Our first order was, &ldquo;A sub from subway, a packet of cigarette, burger from McDonald&rsquo;s, and a Krusher from .&rdquo; Since we tried the facebook chat-- the operator was a little slow. They quoted us &ldquo;60-90 minutes&rdquo; and Voila! It was there in 60 mins. The second order was delivered before time. By the way, they have an online payments page too; just order whatever and they&rsquo;ll text you the link to pay.

Word from the founder...

Officially launched early this year by Raghav Reggie Jerath, Jaadu is undoubtedly making a great progress. Raghav said, &ldquo;It all started when I was working a regular job, dissatisfied from my current role, I thought of doing something bigger. One day I just said &ldquo;screw it&rdquo;, I'm going to take the dive. I started small by creating a Facebook page named &quot;Jaadu Inc.&quot; on Facebook without any second thought of how it'll go. I aimed to do literally everything under the sun via chat (virtual concierge).I scheduled the posts and went to sleep. The next morning I woke up to 300 messages. That's when I knew I was on to something.&rdquo;