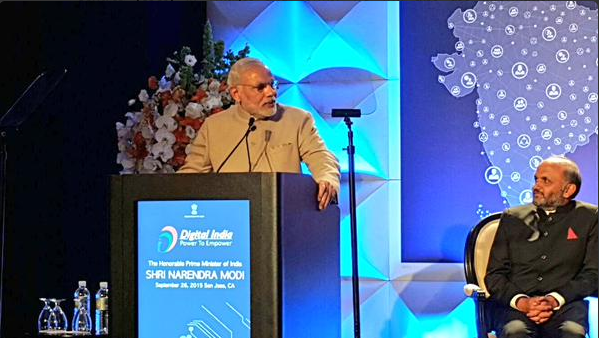 In his push for innovation through the and Make in India initiative, Prime Minister today addressed a gathering of CEOs from ,

"Good evening, everyone," said PM Modi. "If there was ever a gathering under one roof that could take part in shaping the world, it is this. It's a great pleasure to be here in California. It is one of the last places to see the sunset but it is where new ideas see the light of the day," he added.

Sundar Pichai of , Satya Nadella of Microsoft, John Chambers of Cisco and Shantanu Narayan of Adobe flanked the Prime Minister on the stage. The ballroom at Fairmont Hotel was choc-a-bloc with top executives of Silicon valley companies. The event started with a presentation on Digital India.

Talking about the importance of technology, Modi said, "If Facebook was a country, it would be the third most populous. The teacher has turned everyone into a reporter because of Google."

Advertisement
"The status that matters most is not whether you are awake or asleep, but whether you are online or offline. The most fundamental debate between our youth is a choice between Android, iOS and Windows," he said in a lighter vein as the audience applauded and laughed.

"From cleaner energy to better transport, everything is converging around what you do," the PM told the people present there.

Modi then went on to elaborate on how his government has used technology for the better, "Since my government came to power, we have attacked poverty with the power of mobile phones," said the PM. "180 million new bank accounts were opened in a few months, insurance came within the reach of the poorest," he said.

"By using space technology and internet, we have been able to identify 170 applications that will make governance better," he added.

The PM then shared his experience when he met some illiterate tribal women in Gujarat. "They were using cellphones to take photographs. They weren't educated," he said. "I asked them what they would do with these images. They said they would have the images downloaded onto a computer and have them printed out. When I heard the word 'downloaded', I was surprised," Modi said in delight.

Advertisement
He also felt that social media is playing an important part in reducing barriers, "I see technology as a means to empower and a tool that bridges the distance between hope and opportunity,” he said.

"Today, technology is advancing citizen empowerment. Technology is forcing governments to deal with massive amount of data and respond in not 24 hours but 24 minutes," he said.

"Out of this conviction, was born the vision of Digital India. It is an enterpise to transform India in a scale that is unmatched in human history."
"We will transform governance, making it more transparent and accountable," the PM said.

Stressing on the need to promote digital literacy, Modi said, "We are using technology to empart scale and speed to development. Information, education, skills, healthcare, financial inclusion, opportunities for women, conservation of natural resources and entirely new possibilities have emerged,"

But for all this, we must bridge the digital divide and promote digital literacy. We must ensure that technology is accessible and affordable." Modi also said that India already had broadband usage increase by over 60 percent last year.
Advertisement

"We will connect all schools and colleges with broadband. Building I-ways are as important as building highways," said Modi. The PM also said that the government will also use infomation technology to build smart cities. "We want to make our farmers less vulnerable to the whims of weather," he said.