Here’s why we need to focus on agriculture in India! 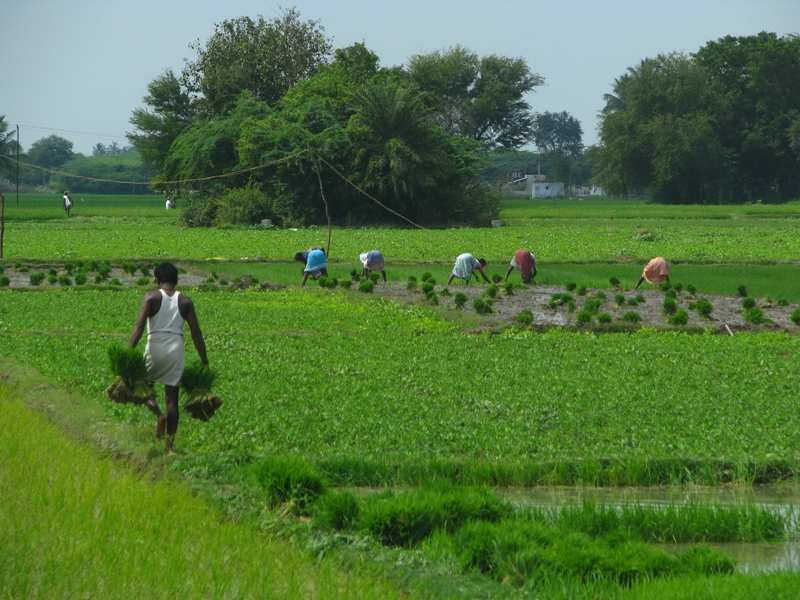 is a very important sector of the Indian economy. It is because it provides employment to roughly half of India's workforce and contributes to 17% of India's GDP. Since independence, a lot of changes have been observed in the sector.

Post-independence India was dependent on imports of agricultural produce. But the years of drought in 1965 and 1966 led the government to focus on raising agricultural production by boosting the yield per hectare of crop. It is often termed as 'green revolution' that was focused on improvements in inputs leading to betterment of output. High yielding varieties, as well as better fertilizers and irrigation facilities and an able scientific research establishment, resulted in improvement in the yield of wheat in the early part of 1970's. When the productivity of wheat rose, rice was the second crop to undergo this kind of transformation. In the case of rice, tube wells played a critical role. Soon the revolution spread from the northern states of Haryana, Punjab and Uttar Pradesh to the eastern states of Bihar, West Bengal and Odisha and along the Indo-Gangetic plain. The benefits, however, were largely limited to one-third of the area that was irrigated. Post-1980's the focus shifted to oilseed, fruits and vegetables that have increased yields and production. The growth in agriculture was slow during the 1960's and 1970's hovering around 3-4% but increased to 5-6% during the 1980's. In the early 1990's it briefly even touched 6-7% but declined rapidly after that to 1-2% in the later part of 1990's and post-2000.

Prominent aspects of the Indian agriculture include:
Advertisement

First, the overwhelming dependence of agriculture on monsoons as rural infrastructure like irrigation is still absent in most parts of the country. Barely 35% of the total agricultural land is reliably irrigated. It has to do with the knee-jerk policy reactions to address challenges of the Indian agriculture. This has to start from understanding the irrigation needs of the country. At present the Indian farmer often has to depend on the mercy of rain gods. Understanding how rivers can be leveraged not just for agriculture but for goods' movement as well as tourism is essential for an overarching perspective on rural development. Also, an integrated view of river systems and irrigation should be developed for all the stakeholders to benefit.

Second, there is still a feeling of inhibition to technology adoption as the results of failure can be catastrophic for individual farmers. It comes as a surprise even after knowing the benefits of better varieties that spurred green revolution. This is where the research community has to play an active role in guiding and learning from farmers their challenges and concerns. Development of agriculture policy must start with making the farmer the centerpiece of any policy action. With population increase, the small size of the landholdings has decreased further and it has led to problems pertaining to farm mechanization. India has a very large proportion of ‘marginal holdings’ below a hectare of land that poses serious problems with respect to mechanization. It explains why the tractors per capita in India are 16 per 1000 hectares as compared to 19 in the world and 27 in the US. From the land holding pattern, it is apparently clear that the kind of farming prevalent in India was and still is ‘subsistence’.

Third, access to formal credit remains problematic even after having banks that are specifically dedicated to agricultural credit. It is true for small farmers who have to depend often on informal sources of credit, which can lead to debt traps and also farmer suicides in many cases. The best way forward is to have better insurance schemes and some behavioural interventions which make farmers aware of their decisions as well as make them feel financially secure and independent. Also, the initiative of farmers is often curbed when credit is not available for value addition activities. When venture finance is available for investment in technology startups why cannot there be venture finance for agricultural producers who want to do value addition for their agricultural produce?
Advertisement

Finally, government procuring at Minimum Support Prices (MSP) at present can be beneficial to farmers however it also has a downside. The downside is that farmers cannot command the price they could in a free market as the market signal has already been decided by the government. Also in the name of food security farmers should not be restricted to sell to only Indian consumers and government. These issues aside, the government has done a terrible job in storing foodgrains in its godowns. Wastage has had various official and non-official estimates with all agreeing that the wastage is considerable. It calls for more competition in the storage of foodgrains segment.

Over the next few years as structural changes continue within the , the share of agriculture is expected to go down. However, the government should focus on some crucial areas like rural infrastructure, better access to credit, and enabling value addition by farmers that spur the agricultural economy to better growth rates than are being presently witnessed.

(The article is co-authored with Sankalp Sharma, Senior Researcher at the Institute for Competitiveness, India. Amit Kapoor is Chair, Institute for Competitiveness & Editor of Thinkers. The views expressed are personal. Amit can be reached at amit.kapoor@competitiveness.in and tweets @kautiliya)
Advertisement
NewsletterSIMPLY PUT - where we join the dots to inform and inspire you. Sign up for a weekly brief collating many news items into one untangled thought delivered straight to your mailbox.
CAPTCHA: