As CEO of IBM, one of the oldest, most powerful companies in the world, Ginni Rometty is no stranger to public speaking.

On Friday, she gave a commencement speech at her alma mater, Northwestern.

During these kind of speeches, Rometty has openly talked about her modest middle-class upbringing in the suburbs of Chicago, what it's like being raised by her single mom after her dad left, and her three siblings.
Advertisement
But she hardly ever mentions her husband of 35 years, Mark Rometty, in her speeches, who prefers to stay out of the spotlight.

Apparently, he noticed. So Rometty included him in one of the funniest portions of her speech, telling this great anecdote about how he set her on her career path:

I had worked for a senior executive, and he decided to go to a new job. He came in to me one day and he said, wonderful, you are the candidate to replace me. So, I was called in the office and with great excitement told I'd be offered this job.
Advertisement

Well, I can remember my reaction: it wasn't the same great excitement. I looked at him and I said, tsk, it's too early. I'm not ready. Just give me a few more years and I'd be ready for this. I need to go home and I need to go sleep on that. Well, that evening, my husband, now up there [she pointed upward, which made it look like she was pointing at heaven] ...well, he's up in the stands, I don't mean too far up.

[The crowd laughed.]My husband of 35 years. Oh, boy. He says I never mention him, and then I do and I mess it up, you know.
Advertisement

He sat and listened patiently to my story, like he always does. And then he looked at me and he said one thing. He said, do you think a man would have answered the question that way? He said, I know you. In six months you'll be ready for something else. And you know what? He was right. And I went in the next day and I took that job.

And that takes me to my second lesson to leave you with: growth and comfort never co-exist. I want you to close your eyes ... and ask yourself, when have you learned the most? I guarantee it's when you felt at risk.
Advertisement

So, when you feel anxious, maybe tomorrow, when you leave and start a new job, I guarantee that that is a good sign.

And this is proven to be a really important realization to me throughout my whole career. I've always looked for challenges and I have found plenty.

Here's a rare photo of Ginni and Mark Rometty.
Advertisement 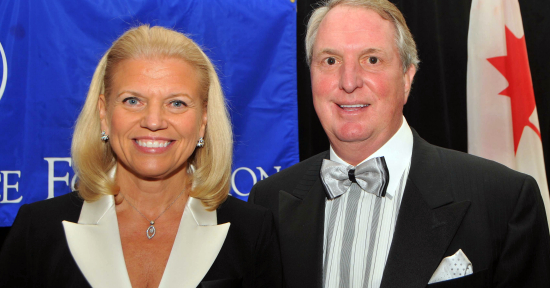