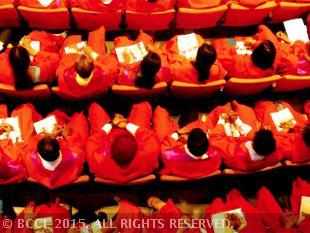 Vying for an entry in the , 2000 students from schools across the national capital today assembled at the sprawling lawns of Indian Institute of Technology, Delhi to conduct the 'world's largest practical science lesson'.

Dressed in white lab-coats, the students streamed into a giant tent pitched by the administrative block in IIT-Delhi to take a shot at the world record for the highest number of students to conduct an experiment simultaneously at the same venue.

Northern Ireland is the current record-holder with 1,339 students. Advertisement
The participating students, with excitement writ large on their faces, got a pep talk from Union Science and Technology and Earth Sciences Minister Harsh Vardhan and Union HRD Minister ahead of the lesson.

Irani told ET that there are plans to have an even bigger 'practical lesson' in Delhi in the coming months, in which school students from across the country will participate.

"We can have it in conjunction with the same team that did this programme today and have over 20,000 students participating. I am hoping that today's programme has a catalytic effect on how we engage with the sciences and school and higher education," she said.
Advertisement

After the inauguration, the students collected numbered wristbands, displayed them for the camera when entering and took their seats at tables kitted out with graduated cylinders, tissue paper, gloves, droppers and other equipment.

During the experiment they managed to together turn methylene blue "reddish-brown" and rapidly decompose hydrogen peroxide to produce foamy ropes as a part of the Elephant's toothpaste reaction.

The video recording and a report on the experiment will now be sent to the Guinness Book which will further evaluate the same and come up with results. Advertisement
The event was organized by Vijnana Bharati (VIBHA), an NGO, as part of the five-day India International Science Festival (IISF) at IIT being jointly organized by the Ministries of Science and Technology and Earth Sciences.

"I certainly think we have it. But our report will be sent by today evening and we'll hear from Guinness in a couple of days," said Jay Kumar, secretary general, Vibha.

The "practical lesson" involved 40 schools, both government and private across the city, each sending 50 students and a few "back up" ones. Advertisement
The children were trained by their teachers and have had several practice sessions each before the big lesson.

The nearly 65-minute-long programme began at 10:37 AM with the school children of standard 9-12, listening in rapt attention to a lecture as a prelude to the experiment. Advertisement
The lecture was delivered by Shalini Menon, a CSIR research fellow at CUSAT.

"To conduct the practical, five students each shared a table with equipments and chemicals. There were 40 stewards to observe students' work, who would be witnesses to affirm that students did complete the experiment successfully," Kumar added.