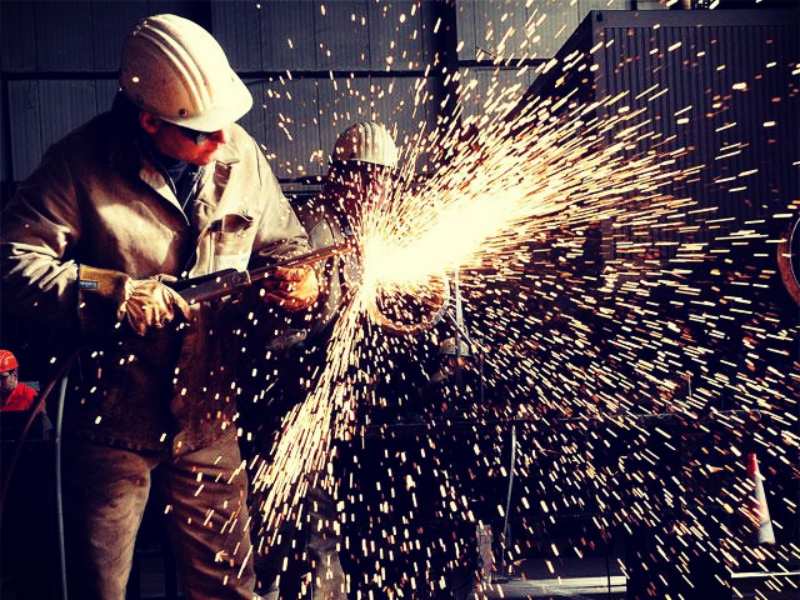 The manufacturing sector has been an Achilles' heel of the Indian economy in the recent past. Manufacturing sector's share of GDP has been hovered around 15% for the past 30 years. Manufacturing sector policy took off post-independence with a focus on planned economic development. The industrial policy statement of 1956 talked about the creation of a massive public sector supported by small sector private and cooperative enterprises. It was the beginning of the push for a planned industrial development. It resulted in the creation of a large public sector but curtailed large private sector development due to the creation of a license permit raj. It also created a perverse incentive system for labour and labour unions that become unproductive over time as employment laws became ossified with great difficulty for businesses in hiring and firing. On the top of it the government also controlled production levels within the economy. All this resulted in stifling private sector development and made it exceedingly difficult to operate factories in India. It resulted in a lack of personal freedom and choice. Added to it was the complexity of regulation as well as the pervasive hand of the Indian state, which resulted in this dichotomy of the 'twin manufacturing' sector. One, which was large, public and organized, and another, which was small, private and unorganized during the early part of the 1980's.

The early nineties saw opening up of several sectors of the economy. It resulted from the balance of payment crises as well as the collapse of the Soviet Union- an ideal India had embraced during the early part of Independence. With the availability of foreign capital and technology India's manufacturing sector benefitted. Some sub-sectors where India was able to do well post 1991 include automotive, pharmaceutical chemicals and petrochemical as well as the electrical equipment segments.

The growth in these segments was driven by a host of factors including increasing demand, rising productivity, greater capital and technology infusion as well as the betterment of the living standards of people. India's manufacturing competitiveness has increased since the 1990's despite the share remaining constant in the overall contribution to GDP. Manufacturing Competitiveness is determined by the productivity (value per unit of input) with which the manufacturing sector uses its human, capital and other resources. The measurement of manufacturing competitiveness can yield interesting insights at the level of a firm or Industry. Even at distinct levels of economic geography like at the level of a city, state, and nation as well as at an International level it offers great insights.
Advertisement

At the level of states, for instance, our research points out that the northeastern states in India have traditionally lagged behind. The states similarly in the south and west have prospered in India due to a host of factors like regulatory structure, business environment, technology sophistication, skills of the workforce as well as basic infrastructure. However, in the recent past the eastern part is trying to do catching up which is a good sign.

Cases of manufacturing nations abroad also yield some interesting insights. Some countries over the past 20 years have prospered while others are stories waiting to happen. Korea, Singapore and China fall into the first category while Russia, Brazil and India fall in the latter.

Over the next few decades, India should focus on making it easier for operating factories as well as opening up sub-sectors within manufacturing to further participation from foreign players. is another area that needs to make it easier for businesses to operate. The focus should not just be on opening factories but providing means for speedy delivery of goods for domestic and international demand. 'Make in India' cannot be successful without a thrust on 'Move in India'. Over the next few decades, the focus will also have to be on skilling and focusing on technologies like additive manufacturing that can fundamentally alter the way in which manufacturing sector operates. Innovation, Infrastructure and Implementation hold the key for making the manufacturing sector globally competitive.
Advertisement