India is growing at 7.5 per cent, will grow faster in the coming years: PM Narendra Modi 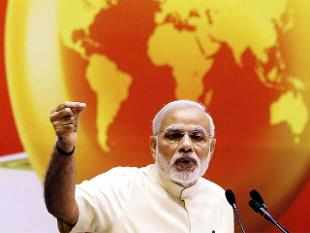 Describing terrorism as the "biggest threat" to the world, Prime Minister today said it needs to be delinked from religion as he pressed for a united global fight to ensure that no country provides sanctuary to terror, an apparent reference to Pakistan.

He underlined the need for ensuring that Internet does not become a "recruiting ground" for terrorism, amid the growing trend of ISIS luring youth from across the globe, and spoke about the world coming together to use "military force" and "international legal systems" to fight the menace.

Addressing the Indian diaspora on the second day of his three-day visit to Malaysia, Modi said India draws strength from its diversity and that his government is working to create an environment where enterprise flourishes and everybody gets basic needs like roof, sanitation, water, health care and education.

In his 45-minute speech at the Malaysia International Exhibition and Convention Centre here, he said development in India is "gathering speed now" amid the global slowdown and the country is growing at 7.5 per cent with faster growth expected in the coming years.
Talking about terrorism, he said it is the "biggest threat to the world today. It knows no boundaries. It uses the name of religion to draw people to its cause but kills people of all faiths."

He went on to add: "We have to delink religion from terror. The only distinction is between those who believe in humanity and who does not.... We also have to work within the society, specially the youth."

"I have said it earlier, I will say it again. The world must come together to combat the biggest challenge of our times....We can strengthen intelligence cooperation, we can use military force, we can make international legal systems for making cooperation stronger," he said.

Modi also made some announcements like grant of USD one million to the India-students Trust Fund for financial assistance to Malay-Indian students and naming of India's cultural centre here after Subhas Chandra Bose.

He said a bust of Mahatma Gandhi will also be installed at the Gandhi Memorial Hall in Kuala Lumpur. He added that India will work with Malaysian government for setting up of war memorial for the Indian soldiers at the site of Battle of Kampar in Perak in Malaysia.


The Prime Minister also favoured immediate recognition of of the degrees conferred by India and Malaysia and said he will discuss this issue with his counterpart Najib during the meeting tomorrow.

While mentioning about merger of OCI and PIO cards, he said minor children, who are foreign nationals, and foreign spouses can also get OCI status now. Besides, Indian-origin upto fourth generation is enough for OCI now.
"In Malaysia, we have opened nine visa collection centres. There is an eMigrate portal to make it easier and safer for workers to go to certain countries. It also alerts officials about foreign employers with cases pending against them," he said.

Telling the diaspora about his government's work, Modi said, "The wheels of change have begun to move. And, they are gathering speed now. And, it is showing in numbers."

He said India is today the fastest growing major economy in the world. "I know you feel proud about it. We are running at 7.5 per cent per year, but will grow even faster in the coming years," he said.

The Prime Minister said every major global institution has "placed its bets on India growing strongly. This is at a time when the rest of the world, including parts of this region, is experiencing a slowdown."

Reposing faith in the talent and enterprise of Indians, Modi said, "There is change in the cities. There is momentum in the villages. And, there is confidence in our citizens, especially our youth."

Asserting that India is not just united but draws strength from its diversity, Modi said, "It is a nation, where every citizen belongs; where everyone has equal rights that the constitution guarantees, the courts protect and the government defends."

About India's external relations, he said these advance peace in the world. "The Indian Armed Forces contribute to region's security and stability. They assist all in humanitarian disasters, without asking their nationality."

He also noted that Indian forces participate in peacekeeping missions around the world.

"We have generations of our leaders to thank for bringing us this far. But, we know that we have a long way to go. The challenges we face and the goals we must pursue, are evident in villages and cities. And, my government has come into office to change that," he said.

"We are eradicating poverty, by giving our people the fruits of modern economy, such as universal access to banks and insurance; not just tie them down in endless programmes," Modi said and added, "Where in the world will 190 million bank accounts be opened in a few months?"

Noting that the world is inter-dependent, he said, "our national progress will depend on the strength and success of our international partnerships... What happens in a far off country can affect the livelihood of workers in another place."

Modi said the decision that may be taken in a conference room in the UN or WTO can affect the life of a farmer in a village in India and the lifestyle in one part of the world affects climate and agriculture in in another part of the world.

"We need each other's markets and resources...We don't have to look far to find friends and partners. Southeast Asia is our neighbour on land and sea. This is one of the most dynamic and peaceful regions of the world. This is a region of culture, talent, enterprise and hard work," he said.