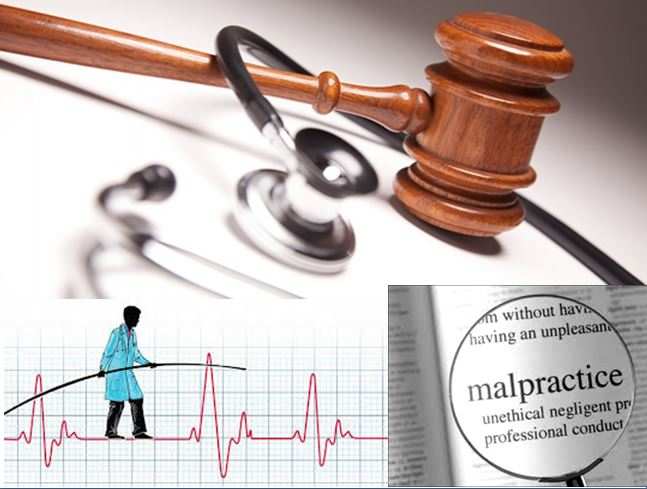 Gone are days when the ‘Doctor Babu’ was revered and cases of were virtually unheard of.

The scenario has changed, a growing awareness has led to people increasingly filing ‘’ suits against Doctors and Hospitals.

The population of a developing country like India relies largely on government hospitals and institutions for medical care. Private hospitals, nursing homes and clinics have mushroomed in every nook and corner of the country.
Advertisement Even the best private hospitals are prone to medical negligence so the percentage of error in government run hospitals is much higher. Often cases are not reported, for either the patient is unaware of the medical malpractice and or does not have resources to fight the system.

Studies have shown that compared to USA, India has almost double the number of cases of medical malpractice.

Over 200,000 people lose their lives in USA due to medical errors and almost 20,000 malpractice suits are filed. Statistics for India are not very accurate, but extrapolated figures indicate 400,000 deaths due to medical negligence.

Advertisement
In India, the Medical Council Act of 1956 had no provisions to deal with medical negligence; it was modified in 2002 to cover medical negligence. Unfortunately the Act does not specify the provision or section under which action can be taken against ‘medical malpractice’ or penalties imposed.

An aggrieved person could earlier only file a case under Consumer Protection Act () but now he can also approach the Civil Courts, The Medical Council of India and the Dental Council of India, Act (Monopolies and Restrictive Trade Practices Commission, or file a PIL (Public Interest Litigation) or seek legal action under sections of the IPC (Indian Penal Code, 1860.

Medical malpractice in India comes under the ‘Law of Torts’ which is not codified in India and is unclear on ‘adequate compensation’.
Interestingly figures show that 80% cases involve surgery with obstetric and gynecology leading at 29% followed by 22% of orthopedic cases. 34% of the cases involve negligence of hospitals along with doctors. Advertisement
However, certain cases have clearly shown that the Indian legal system has woken up and while vary of hasty action against the has awarded exemplary damages ranging from Rs 70 lakh for a wrong amputation and Rs 11.5 crore.

This may have forced the Indian Medical profession to be more careful, but it has led to unnecessary and expensive extra investigative procedures as doctors are keen to cover their backs.

It makes medical care expensive, which is not what the government has in mind with its aim to make medical care easily available. Advertisement Doctors’ points that many patients, their relatives and friends seem to think whatever they read on the ‘Iinternet’ is right and question the doctor’s treatment. They are often very vociferous and ask for second opinions or shift the patient to another doctor or hospital with dire results.

Of late, an unhealthy practice of family and friends of patients demonstrating in hospitals and even indulging in violence is increasing. Every case is assumed to be Medical negligence.

Paradoxically the other side of the Indian Medical Profession is ‘Medical Tourism’ and India ranks as the second biggest in the world. The main attraction is low-cost coupled with high quality medical care mainly for heart surgery, knee transplant, cosmetic surgery, fertility etc. Medical Tourism is a major earner and is expected to grow this year by 30% earning about US $ 2 billion in 2015.
Advertisement A foreign patient has little to fear and is less likely to be a victim of any medical malpractice. Medical tourism is a big money spinner for the private medical sector in India.

The government too is encouraging by easing visa formalities through the introduction of ‘M’ visas or medical visas. It is also working on improvement of connected infrastructure and support systems like aviation, pharmaceuticals and related industries.

What is needed is establishing, encouraging and implementing high standards in health care so that there is little scope for medical malpractice. A clearly codified and quantified law is also needed to ensure that proper justice is administered.
Advertisement