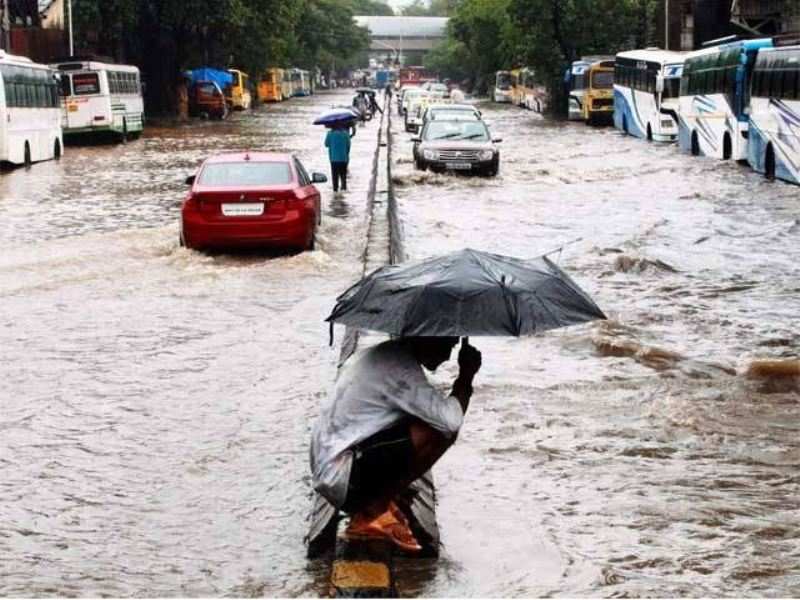 The resilient Mumbaikar is being tested again. The Mumbai-kar who has survived floods, bombs, landslides and bad administration will certainly put up with another round of bad deluge. After all, the administration bodies really know the Mumbaikar takes pride in himself, every time he resurfaces after a raw deal. He is flustered only when the locals run behind by a few minutes, or are being cancelled for the day. Else, all is fine with his world. The bombs can explode and the water can gush.


Really, the state of infrastructure in India’s financial capital is something that invites a feeling of abhor, for want of a better expression. It was exactly ten years ago when the city turned into a live sea just as the day progressed from morning to noon, and into the evening. By then, city had no place to send its people or water that was pouring from the grey clouds. Ever consistently, and continuously. All communication had broken down, and the city had literally turned into a giant water body. Locals rose to the occasion, welcomed strangers into their homes; kept them warm and fed them hot food. That was in 2005. Just about a decade ago. But the memory is so green in people’s minds that it is tough to forget the neck high dirty water and the taste of tablets one had to consume so as to protect oneself from infections caused by rat bites. This was announced on the radio. Yes, had literally returned to stone-age (well, almost) those days with radio being the only mode of mass communication. Because newspapers didn’t reach many areas and television sets wouldn’t work after power breakdown of hours. Landslides followed. Local trains returned on tracks and ran precisely on the minute schedule.

Advertisement
The city sprang back on its feet. It was business as usual and everybody, including the (BMC) went right back into sleep. Studies were conducted to understand the water drainage system in the city which failed miserably when faced with 944 mm of rain in just a matter of 24 hours on July 26, 2005. God-fearing locals understood their mother, water-fairy and carer – River Mithi which flows around Mumbai had gotten angry. She had to be calmed down.

A decade later, Mithi has roared again to expose the bad planning of authorities who have slept through a decade of infrastructure planning and making the city safe for its people. In the last 24 hours, Mumbai has received more than 283 mm of rain. And this has exposed the delicate situation the city has been in.

What happened to all those surveys, studies and urban planning expertise serve the city which controls most part of the of the country?

Advertisement
Heavy rains that pummelled Mumbai have cost the lives of two people who have died of electrocution in the last few hours. But, the real number of those suffering from water-borne epidemics and endemics will never come to fore. They will never make it to the government’s statistics, because the new government would like to believe it needed time to prepare for the challenge. Now, who can challenge them with their own claim? Was it the same people who said city was ‘monsoon-ready’?

Though the authorities claim the city received unprecedented rainfall, the drainage system that has existed since ages lays exposed. Bad and worse days ahead.

As a response to the 2005 flooding, city authorities had formulated The Greater Mumbai Disaster Management Action Plan which was identify the risks the city would face including floods, earthquakes and cyclones, and suggest ways of tackling the water related challenges. Though one of the suggestions was to deepen and broaden Mithi river which drains into Arabian sea, the suggestion wasn’t considered well owing to environmental factors.

Just recently, Intergovernmental Panel on Climate Change predicted rise in sea level and Mumbai being the second city in the world at a risk of receiving high rainfall and being subject to floods too. Though development of improved drainage for the city is underway, the works are not moving at a desired pace. Pity that the governments chose to risk people’s lives and property over speed of expediting the works since 2005 floods.

A decade later, Mumbai stands exposed and how! In the last decade or so, Mumbai has spent more than Rs 1000 crore on flood preparedness and meeting the challenges that rise alongside. But, looks like the picture was worth less than the money paid. Because, the city has now returned to the starting point. Now, it’s an uphill task all over again.
(image credits: Indiatimes)

Next StoryDusk and Dawn of the Indian Attack Helicopters
Popular on BI
1
Charlie Hebdo, whose cartoons sparked terror attacks in France, published a cutting caricature of Turkish President Erdogan amid his feud with Macron
2
COVID-19 vaccine updates: Pfizer, Moderna to roll out COVID-19 vaccine by December
3
Apophis, the ‘God of Chaos’ asteroid is speeding up — increasing the likelihood of it hitting Earth in 2068
Latest Stories
Trending News
Buying Guides
Dusk and Dawn of the Indian Attack Helicopters
Read on to know if the fall in Chinese market is good for India?
Trying to play hero? Congress adopts Vidharbha farmers’ families post Rahul Gandhi’s visit
Popular Categories
Trending Right Now
More from our Partners