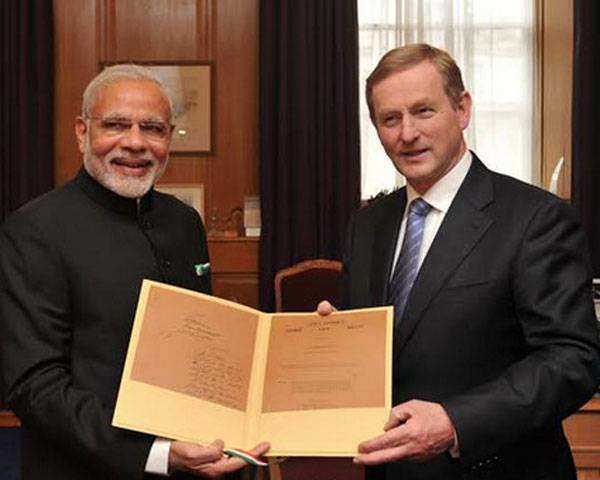 Prime Minister today presented to Irish PM reproductions of a selection of historic manuscripts and papers pertaining to two Raj-era Irish officials, and , in recognition of their contributions in India.

Modi also gifted a specially handcrafted piece of silver, marble and roughly-hewn sandstone rock that imagines the Irish symbol of shamrock as a votive candle-stand or an 'aarti' lamp, with a peacock perched by the side of shamrock leaves, along with silver-tipped crystal dewdrops signifying serenity and purity.
Advertisement

The original manuscripts and papers which Modi presented to Kenny are preserved in the National Archives of India.

Born in Dublin, Oldham (1816-1878) was appointed as geological surveyor in 1850 to conduct a survey in India and his services were placed with the then .

He assumed charge in March 1851 and his joining day is celebrated as the foundation day of the Geological Survey of India. Apart from conducting the first systematic coal mapping of India - and later initiating mapping of other minerals - he wrote extensively on the fossils of India.
Advertisement

Grierson (1851-1941) was an Irish civil servant and philologist who, starting 1898, conducted the first Linguistic Survey of India. The Survey was later published over several years during 1903-28.

It was Grierson's Survey that provided the first scientifically-based taxonomy of the Indo-Aryan languages within which the linguistic status of various forms of Hindi, Urdu and other Indo-Aryan speech forms is based.

The separation of Hindi into Western and Eastern dialect zones is the direct result of Grierson's classification efforts. As a student of mathematics at Trinity College, Dublin, Grierson took prizes in Sanskrit and Hindi.
Advertisement

Grierson went to Bengal in October 1873, where, in addition to carrying out his duties in a succession of government posts until 1898, he devoted much time to language research. Two of his most important works are Seven Grammars of the Dialects and Sub-dialects of the Bihari Language (1883-87) and Bihar Peasant Life (1885).

The latter work, in addition to offering much linguistic information, describes the life, farming methods, and beliefs of the Bihar peasantry.

In 1994, India instituted an award in his honour that is given to foreign scholars who have made significant contributions to Hindi.
Advertisement

Next Story6 easy yet successful ways of retaining talent
Popular on BI
1
Charlie Hebdo, whose cartoons sparked terror attacks in France, published a cutting caricature of Turkish President Erdogan amid his feud with Macron
2
A mutated coronavirus strain causes most new COVID-19 infections in Europe and was spread within the continent by tourists, scientists say
3
Four Wall Street businessmen ordered a $2000 bottle of wine, and didn't notice the difference when they received a $18 bottle instead
Latest Stories
Trending News
Buying Guides
6 easy yet successful ways of retaining talent
Netaji Files: The Japanese were in favour of ‘Bose group’ during WW-II
5 times Modi proved he is one the world’s best orators
Popular Categories
Trending Right Now
More from our Partners