PM Modi to do a Madison Square at UK's Wembley stadium tomorrow, it’s bigger and better! 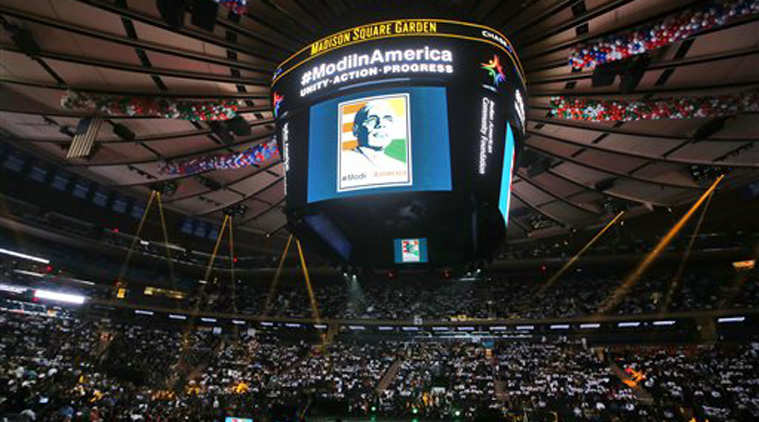 His ‘Madison Square’ moment a few months ago got the world glued to their TV sets, and the Indian Prime Minister is once again all set to recreate the magic, this time at UK’s amid 60,000 British Indians!
Amazing OffersView all Offers

Modi's popularity has attracted three times the crowds at Madison Square leaving even the UK Prime Minister stumped. "I sometimes wonder why I don't have the magical ability to bring 60,000 people of my city together at one place," he joked recently.

TOP VIDEOS FOR YOU
Modi's high-profile visit comes just weeks after China's president Xi Jinping was welcomed with pomp and show. However, the Indian Prime Minister will receive a high-profile ‘Olympic-style’ welcome at Wembley stadium in the largest reception any foreign head of government has ever received in the UK. It will also be the largest an Indian Prime Minister has ever received anywhere outside India. The grand event however has been scheduled for the second day of his UK trip.

Advertisement
On his first day today as Modi lands in London , he will receive a Guard of Honour. He will talk to his British counterpart and a joint press conference is expected to follow these bilateral talks focused on development partnership, defence, security, energy and climate change.

He will also address the British Parliament before arriving at Chequers, the country home of Cameron to spend the night there. The two PMs are expected to have a joint yoga session there.

On Friday, Modi will address the Indian community at Wembley stadium after having lunch with Queen Elizabeth at Buckingham Palace. The massive reception has been themed “Two Great Nations. One Glorious Future”. It will kick-off with a specially produced cultural show featuring some of the very best British Indian artists, at least 600 of them. Reports suggest that singer Kanika Kapoor, popular for hit numbers like Baby Doll and Chittiyaan Kalaiyaan, will be the only Bollywood performer at the event. She is believed to have prepared a special welcome song for the PM. ‘Modi Express’ buses will ferry thousands of guests to the venue. The welcome speech will be delivered by the UK PM first. As Modi takes to the stage later to deliver his keynote address, the rally will be topped off with "the biggest fireworks display in the whole country", according to the UK Welcomes Modi website. It is believed to be the center point of his visit that coincides with Diwali. The event website www.ukwelcomesmodi.org will go live tomorrow at 1000 hrs UK time and the event Twitter handle is @ukwelcomesmodi that will be used for all announcements and information relating to the event and its build-up.

Advertisement
A day later, Modi will address a CEO’s forum where several MoUs are expected to be announced between British and Indian companies, after which he will unveil a statue of the 12th century philosopher Basaveshwara as well as inaugurate the Ambedkar House museum in north London, before leaving for Turkey to attend the G20 summit.

His visit to the UK comes shortly after the Bharatiya Janata Party’s crushing defeat in the Bihar elections, its biggest failures in 17 months after winning Lok Sabha general elections. Notably, in a tweet before heading to the UK, he had said, "I am hopeful this visit will strengthen economic ties between India and UK & bring more investment to India.#makeinindia." In a bid to create an environment of co-operation before leaving for the UK, the Indian government on Tuesday announced 15 key reforms in Foreign Direct Investment (FDI). Still, all is not well. At least three protests have been planned outside 10, Downing Street. A group calling itself "" has organized a demonstration during talks with PM Cameron. It accuses PM Modi of creating an "authoritarian culture" in India. Some 46 British MPs have signed a parliamentary motion urging the UK PM to raise human rights issues with the Indian government.