Pollution in Delhi is increasing, but the demand for anti-pollution masks is not- here’s why 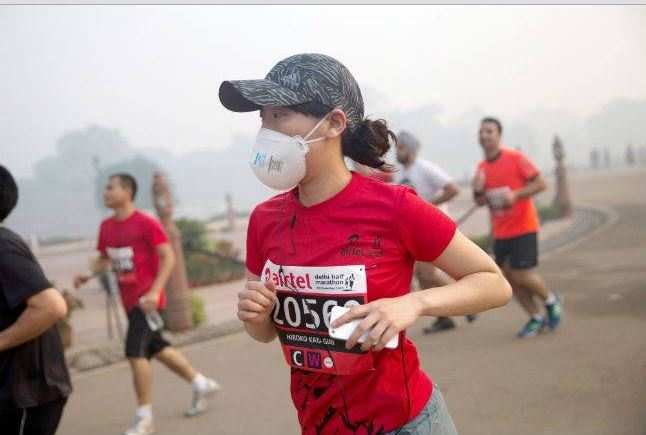 Advertisement
It is a known fact that India’s capital is facing a crisis when it comes to air pollution, to an extent that it was one and a half times worse than the pollution levels in Beijing over the past week.

Recently, an Indiaspend analysis of PM 2.5 concentration levels found that "the average weekly PM 2.5 concentration in Delhi's air was 230.9 micrograms per cubic metre (g/m³), giving it a 'very poor' rating of air quality under the guidelines of the Central Pollution Control Bureau (CPCB). This rating means that it could lead to 'respiratory illness on prolonged exposure'.

Another study by the Kolkata-based Chittaranjan National Cancer Institute (CNCI) shows that nearly half of Delhi’s school children suffer from permanent lung damage while around 10,000 people will die prematurely from air-pollution in Delhi.

Additionally, the hazardous which engulfed the city in the past few days reducing visibility down to about 200 metres has also forced a handful number of residents to move out of Delhi or atleast contemplate living somewhere which doesn’t resemble ‘living in a gas chamber.’

Even as the dangers of breathing the polluted air looms right in front of the citizens residing in what is being considered as the most polluted cities in the world, why then are they so blithe in taking steps to protect themselves from the choking air?
Advertisement

Granted, the sale of air purifiers are on the rise with more and more people bringing it in their homes in a bid to chase clean air to breathe, but it should be kept in mind that air purifiers work only indoors, not outdoors.

are widely considered the easiest way for an individual to protect themselves from not just dust but also contaminants present in the air, but in the city of Delhi, residents using such masks are still a rarity.

The reason for this is undoubtedly the lack of awareness. Anish Kapoor from Shiva Industries which makes a variety of anti-pollution masks (used even by the Delhi police) available online says that there has been no change in his sales numbers as people are least bothered about masks.

“Not only are they not aware of the dire consequences of the pollution, but they are also quite unaware of the existence of anti-pollution masks and where to get them. The fact that wearing a mask is not considered ‘cool’ doesn’t help either,” Kapur states.

The anti-pollution masks are available both online and offline. They can be bought from chemists and from Select City Walk and shops in Khan Market, being judiciously priced from Rs 180 to Rs 750. There are designer varieties as well, which are priced Rs 2,000 onwards.
Advertisement

According to Vikas Yadav, shopkeeper at Khan Market whose medical store sells about 20-30 masks on a good day, the majority of people who buy them are either people with existing respiratory illness or foreigners.

“I expected more people to buy the masks considering how difficult breathing has become in the city, but unfortunately sales have been maegre,” Yadav summed up.

He is of the belief that for the situation to improve, it is imperative that the government takes steps to educate the people on the importance of these masks and the dire effects of the air quality in the city.