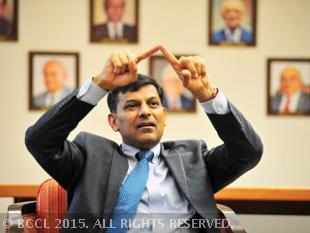 According to Governor, , 's pain of economic slowdown is India's pain too. His view contradicted government assertions that will not be affected by deceleration of Chinese .

"The Chinese slowdown is a concern for the whole world. There is a lower demand for some of our exports to China. But indirectly too, many of the countries are not exporting to China as much as they did and they are buying less from us," Rajan said in an interview with Hong Kong-based South China Morning Post.
Advertisement "But India being a commodity importer, has been helped a bit by cheaper commodities. So the impact has not been as bad as it could have been. Still, on the whole, we have been adversely affected by the Chinese slowdown because China's slowdown has impacted global growth and India is very well integrated into the global economy", Rajan said.

Finance Minister Arun Jaitley had told a gathering at Columbia University last month that India is "not impacted" by the slowdown as it is not part of Chinese supply chain and India could become the "additional shoulder" the global economy needs to stand on as China slows.

Some comments from India that China's pain is India's gain has drawn strong reactions from the Chinese media.

Advertisement
Rajan was in Hong Kong yesterday to receive honorary doctorate awarded by the Hong University of Science and Technology.

In his interview Rajan also pointed to "growing interdependence" between India and China.

"The prime minister has clearly laid out a path for improving relations with neighbours. The focus is on the East, rather than the traditional emphasis on the West. Whether it is through the Asian Infrastructure Investment Bank or through China's Silk Road initiative, we will have greater engagement with China and Chinese projects. This will also feed well into China's interests in expanding its its engagement in the region," he said.
Advertisement Image credit: Indiatimes