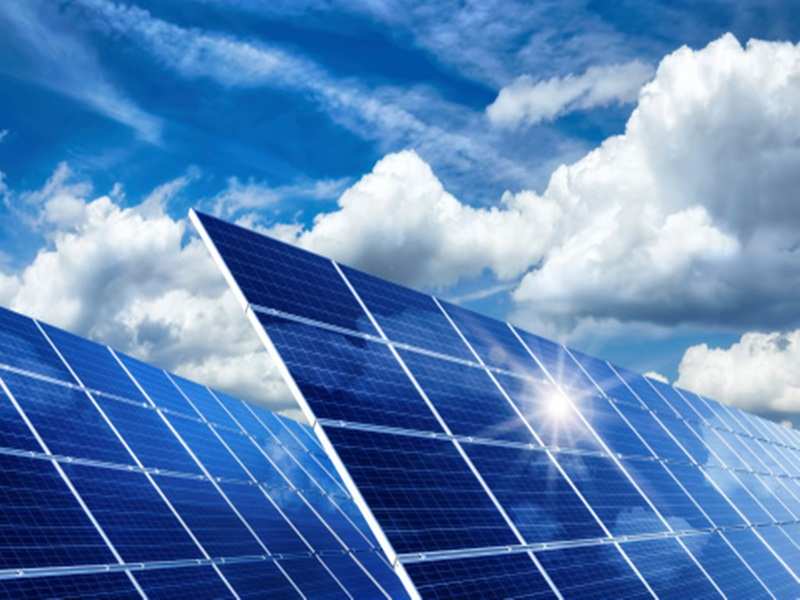 has been the mantra of the energy sector, and the two sources that dominate the world are wind power and solar power. While wind power is older, is the ‘Rising Sun’ of the alternate and clean renewable energy sources. In 2014, global solar power generation touched a record figure of 46 GW.

According to Bloomberg, solar power has attracted about 50% of total global investment in clean energy and had risen to US $310 billion last year.

Why is it so? Foremost, it is available freely and in plenty all over the world. It is flexible, renewable as long as the Sun is up above in our skies. The second factor is that Solar PV directly converts into electricity. No messy turbines and fuels required to run them. Third, cost of solar power has come down drastically with innovations and improved technology.
Advertisement

Bloomberg New Energy Finance figures show that global levelised cost for Solar PV projects has reduced drastically by 59%, from US $315 per MWh in 2009 to US $129 per MWh in the first half of 2015. This means more power per investment dollar.

It also has a great advantage of being ‘Clean’ over other renewable energy sources as it is non pollutant.

Solar power attracts not just the developed but also developing countries and even countries who are major fossil fuel producers like UAE, Saudi Arabia, etc. The wide fluctuation in oil prices and the 50% drop between June 2014 and March 2015 have made countries aware of their energy vulnerability.
Advertisement

Dubai has awarded a contract to Saudi Arabia’s ACWA Power International to build a 200 MW Solar PV Plant at a cost of US $330 million and it is backed by an agreement to sell electricity at US $5.80 per MWh. It is the world’s lowest contract in this sector.

On the other hand, countries like which import almost 100% of their energy requirements have opted for solar energy. By 2020, Jordan hopes to generate 1.65 GW of renewable energy to its grid.
Advertisement

In 2012, it also has introduced net-metering regulations that allow PV owners to sell solar power at approx. US $0.18/kWh. The US and other countries should take a leaf out Jordan’s book.

Developed nations investment in renewable energy to the tune of US $138.9 billion was just 3% more while developing economies invested US $131.3 billion a commendable 36% increase. China is the top investor with US $83.3 billion, a 33% increase over 2013.

In Solar power itself, the growth in developing economies was by 25% over the developed countries.
Advertisement

Leading developing countries is China with investments of US $40 billion (a 45% increase) to build 13 GW of solar power capacity. Interestingly, perhaps an indication of the future, 10 GW is from utility scale plants (plants of more than 1MW).

Second biggest investor Japan pumped in US $34.8 billion (an increase of 13%) to set up small scale projects of less than 1 MW that contributed 81% of its total investment.

In the top ten echelons of investors globally were the BRICS nations of Brazil (US $7.6 billion), India (US $7.4 billion) and South Africa (US $5.5 billion).
Advertisement

India, the world’s largest growing , saw a 50% increase in solar power investments to the tune of US $3 billion. Last year, the solar capacity installed in the country was 3 GW out of which solar thermal power contributed 204 MW.

India would like to reduce its dependency on imported oil and is looking towards renewable energy to provide power throughout the country. It has plans to raise solar capacity to 100 GW by 2022. It has given several tax and fiscal incentives besides setting national RPO or renewable purchase obligation targets of 10% by 2015 and 15% by 2020 of the country’s power distribution.

Egypt has also allowed use of state-owned land in exchange of 2% of the renewable energy produced on it.
Advertisement

As compared to developed nations like the US, UK and Europe where the growth of Solar Power is hampered by lack of government support, buy back and grid integration, developing countries are going all out to promote solar power and other alternate energy sources. The developed countries have concentrated more on wind energy.

If the world is to achieve the global limit of temperature rise by 2 degrees Celsius then renewable energy sources like Solar, wind power etc. are the only viable alternatives. In 2014 alternate energy sources provided 9.1% of global power resulting in a saving of 1.3 gigatonnes of CO2 emission.

More encouragingly is the healthy investment in which energy investments have recorded a healthy growth of 54% to US $15.1 billion in 2014. The new YieldCos invest in the operating stage of solar and other renewable energy sources and in 2014 total investments were US $5 billion.’
Advertisement

Smaller units, more efficient grid integration and distribution along with increased government support and technical innovation will accelerate growth in the coming years.

Global Solar power is expected to record a capacity increase of 57,000 MW during the current year.

David Roberts in Vox has aptly stated ‘this distributed energy net, harvesting, storing and sharing the sun’s power’ will be the future of global solar energy.
Advertisement
(Image: Thinkstock)