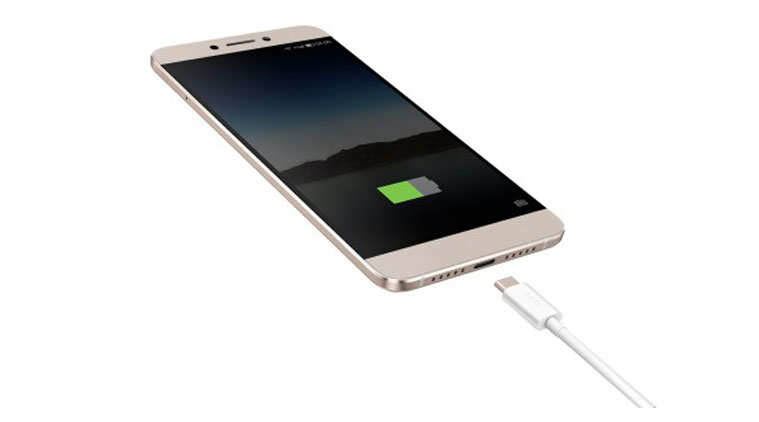 LeEco's flagship killer device- the Le1s has truly disrupted the Indian smartphone market. The Le 1s has become an industry favourite in a short span of time, evident from the records the Superphone has broken since its launch in mid-January. With a disruptive price of just INR 10,999, the Superphone is powered by features which are no less than a high-end smartphone. One such feature being the revolutionary Type C charger which makes charging quick- imagine just 5 minutes of charging gives the user a 3.5 hour of talktime!

At a value price, the Le 1s offers USB Type-C charger which is not just future-proof but also makes data transfer quicker and charging superfast.

Here is decoding the user benefits of Le 1s’ revolutionary Type-C Charger-
Superfast Charging - USB Type-C also allows faster electricity transfer, which means that devices such as phones will charge faster. It also allows two-way power transfer. The Le 1S comes with a 3,000mAh battery with a fast charging support, which makes the phone a must buy for technology enthusiasts and youth alike who love spending time on their . Advertisement
Quick Data Transfer – USB Type C uses more efficient data encoding which enables it to transfer content either way at really quick speeds. USB Type-C is backward compatible, which means that a USB adapter can be used to connect it to a computer or laptop that only has standard-sized USB ports.

Reversible Usage - The primary difference is, it's reversible, which means that unlike the Micro-USB plug we use now, one can stick in a USB-C cable any which way and it doesn't matter because either side is "up." In addition to that, USB-C (which describes the plug's shape) supports the USB 3.1 standard, which describes some stuff one can do besides simply charging the phone.

It’s future-proof - USB Type-C is simply the future and it has already proven itself to be better than all the microUSB cables that we currently have. The technology is designed to be future proof, so eventually it should become the only connector and port that is used. Smartphones that don’t have USB Type-C are going to be the ones that stick out in 2016.
Advertisement

LeEco, the company which is known to bring such disruptive technology to the market, has also ensured that its users get access to Le Type-C charger with additional safety features such dust-and-short circuit proof. The fast charging features of the Le Type-C connector are supported by its two charging paths, 24W charger, 3A Data Cable and high density superfast charging battery.

Stunning design, best-in-class technology, compelling features, first of its kind content integration – all of this makes Le1s a leader in its segment hands down!
Buyers of the Le Superphones can expect a content ecosystem to be uploaded into its android-based EUI system in the 2nd quarter of this year since the company has already signed contracts with Eros and Yupp TV. The company has inked a deal Eros Now for Video-on-demand (VOD) and with YuppTV for TV content streaming.
Advertisement The company's after-sales policies are also best-in-class with 555 service centers in prime locations in the country, besides providing 24*7 toll free services, and other value-added services.

About LeEco: LeEco, formerly known as Letv, is a global pioneering internet and technology company with multiple internet ecosystems across content, devices, applications and platforms. Founded in November 2004 by Jia Yueting and Liu Hong, LeEco employs more than 10,000 people and is the world’s first video company to go public with a market capitalization of more than $12 billion USD. Headquartered in Beijing, China, it has regional headquarters in Hong Kong, Los Angeles and Silicon Valley.

With disruptive innovation as the guiding principle, LeEco is engaged in myriad businesses, spanning Internet TV, video production and distribution, smart gadgets and large-screen applications to e-commerce, eco-agriculture and connected super-electric cars. The company also has one of the world's largest content libraries which includes movies, TV dramas, entertainment shows, and music, which can be viewed on LeEco devices like Superphones and Super TVs. Breaking the barriers of industries, LeEco provides personalized products and services for an enhanced user experience at disruptive prices.