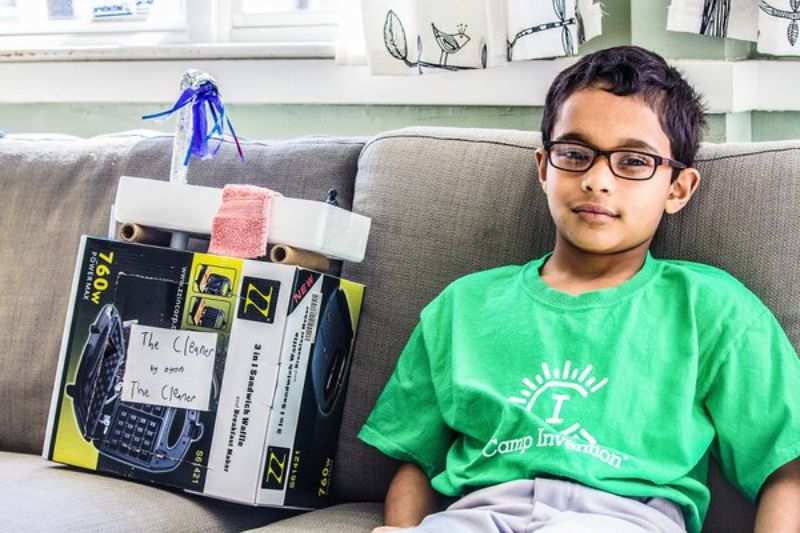 All that 9-year-old could think when he came across the viral ALS ice-bucket challenge was the fact that it was a terrible waste of water.

He also found out that a 10-minute shower wastes approximately 50 gallons of water. “Multiply that by five people taking 20 minute showers, that comes upto around 500 gallons,” he said.

Unable to shake off this terrible realisation regarding , Ganguli decided that something needed to be done.

The result of that is ‘’ which is a shower water recycling prototype that filters the water which can once again be re-used in the shower.
Advertisement

What more? The Massachusetts resident conservation-oriented won him the Camp Invention Mighty Minds contest this year. The contest is run jointly by National Inventors Hall of Fame (NIHF), a platform for America’s budding young inventors.

In a Youtube video where he explains his prototype, Ganguli claims that it was because of his mother that he had entered the competition.

‘The Cleaner’ was made inside a strawberry box which held three layers of cleaning material- gravel, sand and charcoal. He took help from his friend Mateo Rosado for the filtering process. While researching for the prototype, Ganguli also realised that a similar product already exists but he wasn’t one to give up.

Ganguli, who is Bengali novelist and Sahitya Akademi award-winner Sunil Gangopadhyay’s grandson claims that he was so excited about his win that ‘he ended up running circles around the kitchen and backyard for 20 minutes.’

The third-grader at Fitzgerald Elementary School worked for an hour over two weekends to build the presentation. Explaining how it works, he said that the machine takes in used shower water from the drain and reaches a filter with three layers: gravel, sand and charcoal. After the water is cleaned and filtered, it sits in the storage tank before it is pumped back up to the bathtub. There is also a little door that provides access to the filter incase it gets clogged.
Advertisement

Even though the invention can be expensive, Ganguli is confident that it will save the government from spending more money to get water apart from reducing one’s water bill.

As the grand prize winner, he also gets to spend two days in Washington D.C at the National Inventors Hall of Fame where he’ll meet some of the brightest minds in the country.

But, Ganguli is far from done. Infact, the 9-year old is already working on another idea, called the ‘’- which is a solar-powered robot whose one arm melts space junk and the other vacuums up the melted liquid.

The idea for this came to Ganguli while he was watching Apollo 13 with his parents and thought to himself, “What happens to everything that’s flying off the ship into space?”

He also has big dreams for when he grows up. “When I grow up, I want to be one of three things- work at Lego, be an inventor or work for Mojang (the company that develops Minecraft),” he said in an interview.
Advertisement