What drives the coupon market in India? 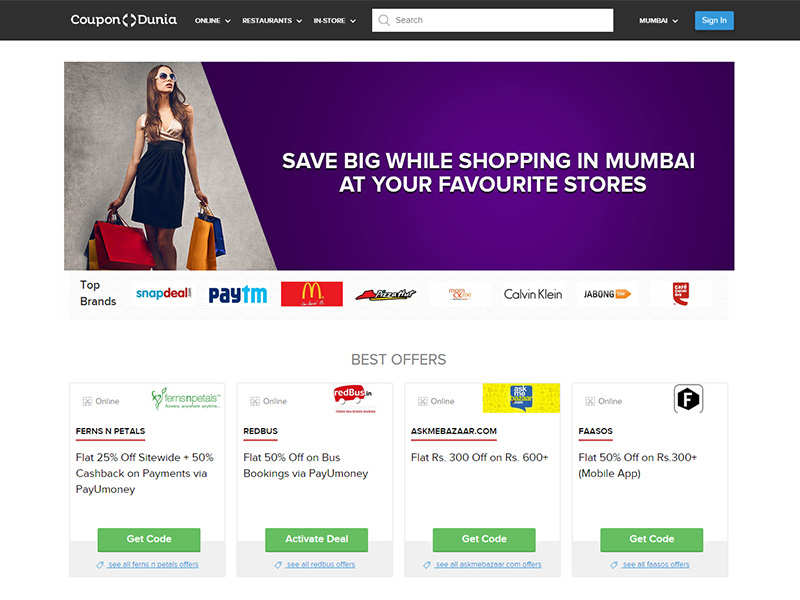 intends to fill in the largest remaining void in the world of offline retailers and brands by launching in-store shopping . Users will be able to get the same type of great online shopping discounts but instead for use at their favourite offline retailers and brands within categories like apparel, footwear, accessories, home decor, baby, electronics, jewellery, gaming and handbags.

Are such launches predictions of huge growth of the coupon market in the coming few years?
Advertisement Let us have a look at some market numbers first.

India is at the cusp of witnessing the fastest growing e-commerce market in the entire Asia Pacific region. As per Forrester report, with a compound annual growth rate expected to be at 57 per cent between 2012 and 2016, the coupon sector is set to exhibit maximum growth.

report revealed that in the year 2013, mobile internet use resulted in a 14.2 per cent growth of traffic in the Indian online retail market. With more and more coupon websites and e-stores focusing on taking advantage of the mobile platforms, shopping online is not only more affordable but also a lot more convenient.

Advertisement
The coupon business is 13.5 per cent of the total e-commerce audience in India, growing at the rate of 62.9 per cent with 7.6 million unique users a month.

95 per cent buyers search for deals online and 74 per cent view the coupons available at couponing portals.
Advertisement

All these numbers clearly reveal the healthy status of the .

“In 2010, there was nothing like coupons for online shopping in India. It was something that heavily built up slowly over time. Consumers tried coupons and liked it. Merchants saw results from coupons and started offering more coupons which gave users even more coupon choices. It always keeps repeating. Restaurant coupons are a huge success now. A few years ago, there was no such thing as restaurant coupons,” said , CEO of CouponDunia.
Advertisement

So what is pulling it behind?

While addressing such questions the very first thought that comes to our mind is the Snapdeal case. Three years ago Snapdeal tried to enter the coupon market before it decided that Indian market was not correct for coupons. This is the right place to clarify all skepticisms surrounding it.
Advertisement “Snapdeal wanted a bigger credential market. The coupon market was never unattractive. They chose to move to a bigger market. Snapdeal right now is $8 billion Company and coupon market in India will not be $8 billion Market Company. Coupon was never a bad market; it is just that e-commerce was a bigger market,” said Sameer.

He further added that three years ago in the digital age, the smaretphones were not advanced like today by which one can do almost anything and everything.

“Just because their venture lapsed, it does not mean coupons are not gaining market,” he said.
Advertisement The coupons market is a successful one in the West. Almost everyone give coupons and it is a great strategy for attracting the consumers mind share.

“In India it is not doing very well because you need a player who can distribute these coupons on a wide basis. We have this audience who use coupons in the online world and restaurant world. Now we are targeting retailers and brands,” said Sameer.


Advertisement What is the company, that rules online coupon world in India, doing to up the game?

CouponDunia is introducing hyper local coupons that will help people save money via offline retail therapy.

With the launch of offline retail the primary focus is to close gaps in ways consumers can save. The monetization is not the foremost goal. However the business model is to take commissions on purchases made using our coupon codes.
Advertisement

The discounts go from anywhere from 5% off to about 50% off. Or in some cases it's a flat amount say Rs. 200 to Rs. 2000 or Rs. 3000. It all depends on the brand and what they are willing to give. Some of their partners include Shoppers Stop, Calvin Klein, Marks & Spencers and Skechers.


Advertisement With a goal of being able to help consumers save money on anything and everything they buy, as a company they are investing heavily into opening new categories.

“After the launch of these in-store coupons we will also be launching grocery coupons next month,” said Sameer. Through this they aim to win the innovation challenge that affects this sector heavily.

He added that as a company they earned more than Rs. 20 crores revenue last year and this year they are looking to double that this year. For that they are all geared up too.
Advertisement

What drives the market?

Sameer said it is mainly the customer’s trust and mindset.
Advertisement “If you know that Shoppers Stop is giving an additional discount, you will go to Shoppers Stop and not Lifestyle,” he said and further added,” If there is a way to save money without much effort, people are willing to take that up and make it popular. We have seen that happening in online shopping coupon, restaurant coupon and in the West and believe this will work too.”

CouponDunia now offers coupons from over 5000 restaurants across 6 cities. It has reached a target of 2 million downloads on the mobile app and do about 5 million sessions on their mobile app a month and have an additional 4 million visits to the website a month.