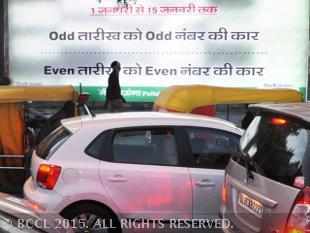 On the eve of the roll out of ambitious odd-even scheme, Delhi Police Commissioner B S Bassi appreciated the initiative of the AAP government, saying any step which helps the environment cannot be a bad thing and asserted he will ensure full implementation of the vehicular restrictions.
Top DealsView all Offers
Fashion
Furniture
PC & Laptops
Grocery
Large Appliances
TV
Amazon Devices

The police chief said he had proposed to the Delhi government to allow women not having a driving licence or who do not know how to drive to travel with a male driver, considering safety the aspect, but it was shot down.

"Whatever we do, we always do it with full commitment. We never do anything half-heartedly. We never have any hesitation in working with anybody as long as something is required to be done as part of law enforcement.

Advertisement
"But we obviously will not be part of anything which is unconstitutional or illegal," the police chief told PTI clarifying doubts about police's commitment to implementing the scheme.

When asked whether the scheme was a good initiative by the Arvind Kejriwal-led governmnent with which Delhi Police have had frequent run-ins on a range of issues, Bassi said "Anything which can help preserve the environment cannot be a bad thing."

He said all motorists should comply with the provisions of the odd-even scheme and should not fake medical emergency to get exemptions.

Advertisement
"As long as the law, which I am supposed to enforce, has not been declared unconstitutional or ultra vires, I have no option but to enforce it. So as far as I am concerned, the notification which has been issued by the government is a valid law (for the odd-even scheme). So as a law enforcement officer, I shall be implementing the same," the police chief said.

On police's proposal to extend exemption to women travelling with drivers, he said "We thought in the interest of women safety that another exception could be made in favour of women travelling alone with a driver.

"This suggestion has not been accepted by the government. So now, If any woman travels with a driver, in violation of the scheme, such a driver shall be liable for prosecution," the commissioner said.