With less than a day to go for Budget, here's what you should look out for in India's balance sheet 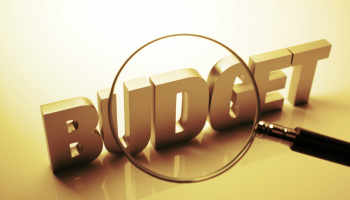 The 3.5% target set by the Government while sine qua non to achieving a robust fiscal standing, cannot be cast in stone if that means sacrificing growth in a sagging environment of flaccid private investment, low corporate earnings and stressed balance sheets. That said there probably isn’t an allowable exact deviation- 3.6, 3.7, 3.8…. %, but it would heavily depend on how the finance minister is able to justify the numbers by means of the quality and composition of his expenditure. He really doesn’t want to be the guy who slips by increasing consumption expenditure by way of the 7 th pay commission and sends out wrong signals to the world at large thereby undermining our fiscal credibility; investors need to understand he means business. And let’s face it, if you can’t consolidate when oil is touching USD 30/barrel, then when can you? Hence, it becomes all the more imperative that we chart out a clear and transparent road map of public investment in infrastructure, health and education, saying ‘Look hey, we set aside x billion for infrastructure last year and this is what we achieved. This year we will channel y billion for infrastructure, and this is what we target’. But if they are to do that, they need to back up this expenditure by equally resilient revenue sources. This could be either through the IIFCL or dedicated infrastructure bonds floated in the bond markets. Moreover, we do have considerable leverage as far as increasing our tax base is concerned (right now, our tax/GDP ratio is one of the lowest in the world, including economies with similar per capita incomes). The crucial consequence is that RBI will closely be watching what Mr. Jaitley does, and if it is not enough by their standards then he might as well give up on trying to convince Dr. Rajan to do his bidding and accommodate his fiscal stance.

The following excerpt and graph from the mid-year economic review aptly captures the trend in the major components of in H1 FY 16 over the last financial year:-

“The remarkable thing about 2015-16 growth performance is that it continues to be as strong as it is given the weakness of exports (because of declining world markets) and private investment… For an economy that is powered only by private consumption and government investment, it is doing remarkably well. The difference with 2014-15 is that the decline in exports and private investment has been offset by higher consumption and public investment.” 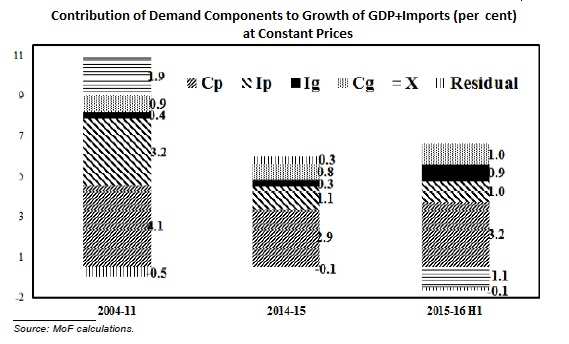 As explained by the diagram given below, stressed corporate balance sheets, dismal interest cover ratio, rise in indebtedness and flat PAT for India Inc. are the root causes contributing to the decline in corporate capital expenditure as a proportion of GDP. Other important factors leading to fall in private investment are tepid growth in domestic demand and dismal Ease of Doing Business in India. 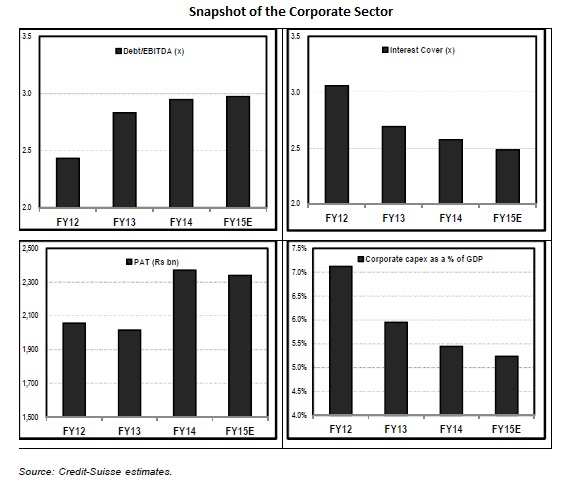 There are four broad policy measures to ensure a pickup in private investment, a critical component of aggregate demand.
Advertisement

Firstly, lower interest rates are imperative for greater private investment. Despite 125 bps cut in the repo rate by RBI, there has been inadequate transmission. The Budget should focus on expediting the recapitalisation of public sector banks. In order to mitigate the issue of stressed assets of banks, besides strengthening the Asset Reconstruction Companies, the govt. can look at the prospects of a National Asset Management Company which can take over the NPAs from the banks’ balance sheets. This has the potential to lower the interest costs by providing more loanable funds to the banks.

Secondly, growth-conducive tax laws and consistency in interpretation and implementation are required to establish a predictable tax environment. A personal tax framework which boosts consumer demand through increase in disposable income is needed. A robust implementation plan for , removal of tax anomalies like the inverted duty structure and for directing investments to critical sectors are other policies to be adopted in the Budget.

Thirdly, in the Ease of Doing Business Index, India’s rank is dismal in ‘Starting a Business’ and ‘Dealing with Construction Permits’. Hence, setting up of large dedicated industrial zones and land banks with all the necessary pre-clearances (akin to the plug and play model employed for Ultra Mega Power Projects) will address the major obstacles in the land-allocation process.

Finally, the private sector incurs significant expenditure on health and education. In fact, the largest amount of precautionary spending by Indian households is done on education of children and retirement health. Increased government spending in the social sector will indirectly spur private investment because the higher residual income of the households will increase the domestic demand.

The Indian exports declined for the 14 th consecutive month in January 2016 by 13.6% y-o-y. Although, global demand slowdown is a culprit, India still lags behind China, Japan, and South Korea in terms of exports. The Make in India Programme should be emphasized by giving special incentives for obtaining new investments in sectors that are important in the global value chain such as manufacturing electric components. Special incentives can be in the form of tax holidays, rebated for start-ups, employment-linked tax rebates to entrepreneurs, etc.

Advertisement
Given the challenges faced by the MSME sector (inadequate credit availability, high cost factors, lack of technology and lack of marketing support), it is imperative to provide adequate support to this sector. Focus should be on sectors such as automobiles, textiles, transportation/logistics which have the highest potential to absorb labour migrated from agriculture. ( Source – National skill development reports, Kotak instutional estimates). A lot of MSMEs don’t have any collateral and hence find it difficult to access formal credit. It has been found that 85% organisations feel that they face shortage of talent. Government should facilitate an environment that ensure MSMEs adopt long term incentive schemes to ensure employees have a vested interest and that they are run on performance incentives.


Mitigation of Rural and Agrarian Distress

Slumbering global food and commodity prices and severe back-to-back droughts (first time in the last three decades) due to monsoon deficits have caused an unprecedented agrarian distress. The ensuing reduction in the value of agricultural exports has led to deceleration in rural wage growth. This has indirectly hurt businesses by reducing disposable income and thereby, rural demand.

The government should address four critical dimensions viz. cushioning against weather fluctuations, reducing the cost of cultivation, providing favorable market conditions for the farmers to sell the farm produce, and increasing agricultural productivity. Accordingly, the Budget should increase the expenditure on the Pradhan Mantri Fasal Bima Yojana (to enhance crop ), the Pradhan Mantri Krishi Sinchayee Yojana (to extend irrigation coverage) and fertilizer subsidy. Besides Minimum Support Price, creation of mandis and local markets needs to be encouraged. Finally, crop diversification and mechanisms to provide advice on the appropriate crop for specific variations of the fertile soil will augment productivity. Alleviation of rural distress (beyond that achieved by alleviating agricultural distress) will require increased allocation towards infrastructure projects in rural areas. These projects coupled with MGNREGA can create social assets apart from providing the employment to the rural tenants.

(The article has been authored by a bunch of IIMB students - Dinkar Mohta, Spriha Saggar, Madhur Bajpai and Punit Parekh - on behalf of Networth, The Finance Club of IIM Bangalore. The students take keen interest in the subject.)