Karuna Sharma
Prabha Narasimhan, Executive Director and VP – Home Care, South Asia, Hindustan Unilever Ltd on Surf Excel’s evolution ...
Surf Excel’s Daag Acche Hain came at a time when advertising in the detergent category was limited to its functional aspects of cleaning and adding fragrance to your clothes. Surf Excel, in association with Lowe Lintas, thought of moving away from this functional proposition in 2005. The company already had a campaign ‘Dirt is good’ running in Brazil which was conceptualised by BBH, and ‘Daag Acche Hain’ was an extension of this proposition in India, with a desi twist.

In the 80’s, Surf Excel (then Surf) was carried forward by an iconic character ‘Lalitaji.’ The white sari-clad woman educated the audience about the difference between cheap and effective products. Surf’s Lalitaji was also an answer to rival Nirma’s catchy and evergreen ‘Hema, Rekha, Jaya aur Sushma’ campaign.


In 2012 came ‘Dhondte Reh Jaoge’ Starring a woman in a white sari again, she tells us her husband that he would have to really look for the ‘daag’ once she washes his stained shirt with Surf Excel. He stains his shirt as his kids’ carromboard’s coin hits his Samosa. He blames the wife for spoiling ‘her kids’ and she cleans his stain with a handkerchief for him.

It is only now that detergent brands have woken up to realise that household chores are equally a man’s job. Until the early 20’s, detergent brands were only targeting women and portraying them as nurturers of the family, who didn’t have the agency to make a decision for themselves. Women were seen as someone’s wife or mother, who is supposed to be a good role model for her family by taking care of them, even raise her husband like a baby who can’t wipe a stain off his shirt himself.

Before Daag Acche Hain, stains were just stains that people would think about washing away because, who likes dirt on them? Bollywood has also compared Daag with women’s ‘pride’ and for a long time, had us believe that stains cannot be washed away, especially if you are a woman.
Surf Excel, on the other hand, made us accept our flaws and reminded us that flaws make humans, humans. Through its metaphorical campaigns, it said stains are only temporary and with just one attempt, relationships can be mended and differences are washed away. (It also subtly comments on our country’s poor infrastructure where you can manage to find a puddle anywhere you look).

While it was easy for Surf Excel to walk away from this stereotypical representation of women because they cast kids, Daag Acche Hain was still like a fresh breath of air that didn’t push career-oriented women down a guilt trip.

Surf Excel’s first ‘Daag Acche Hain’ ad featured two siblings. The little sister steps into a puddle and starts to sob. Seeing her little sister upset, the big brother does what any desi parent would do if an inanimate object hurt their kids. Hit it. He also apologises on behalf of the puddle and this innocence, we are certain, does not fail to bring a smile to your faces even today. The ad concludes with a voice over, “Daag lagne se agar kuch accha hota hai, toh daag acche hai na? (If something good comes out of staining, stains are good).”

Sharing the campaign’s purpose, Prabha Narasimhan, Executive Director & VP – Home Care, South Asia, Hindustan Unilever Ltd, said, “Surf Excel is one of the most loved brands in India, and for over fifteen years, we have stayed consistent to our brand philosophy of ‘Daag Achhe Hain’ or ‘Dirt is Good.’ Surf Excel’s communication platform evolves from this philosophy and shows children getting dirty in the process of doing something good and demonstrating good values. By ridding parents of their worry of stains, we become partners in enabling their children to learn (while getting dirty), thus becoming truly meaningful in their lives. Our purpose-led philosophy is in line with our company’s belief and commitment to building brands with purpose.”

Since 2005, all of Surf Excel’s ads have chosen kids as their portaganist.

Telling us why the brand casts kids in their ads, Narasimhan said, “We believe that children should have the freedom to get dirty, because its only then that they can truly learn and develop. And if kids get dirty in the process of doing something good, then dirt is good.”
Below are a few campaigns and the common themes Daag Acche Hain has used over the years:

Using your privilege to help out those who aren’t as lucky:

It further extended the campaign with #HaarKoHarao, reminding the kids who deal with exam pressure that failure is a part of life.

Holi is a natural fit for Surf Excel. We all stain our clothes while celebrating this festival of colours and the brand has never missed this opportunity to replug ‘Daag Acche Hain.’
“Holi is one of the biggest and most loved festivals in our country, and a natural fit with our philosophy. We have been able to create a strong emotional connect with our audiences through our Holi campaigns in the last two years,” said Narasimhan.

Surf Excel’s Holi ad from 2019 titled ‘Rang Laaye Sang’ had evoked a controversy. As its beatiful Ramadan ads, Surf Excel had chosen to portray Hindu-Muslim harmony in 2019. The only difference, however in 2019, was the political scenario.

Surf Excel’s minute-long Holi ad ‘Rang Laaye Sang’ (colours bring people together) featured two kids, a Hindu girl and a Muslim boy. The girl dressed in white, rides on a bicycle and challenges neighbourhood kids to splash her with Holi colours. It is later revealed that it was in order to protect her Muslim friend who had to go to a nearby mosque for prayers. As she drops her friend at the mosque, she said, “I will colour you later” and he agrees, with a bright on his face. However, Twitterati took the ad rather badly and said that the ad portrayed Hindus in a bad light and promoted “Love Jihad.”

However, years 2020 and 2021 have been unusual. We haven’t celebrated Holi like we did before the pandemic hit our country. We don’t get to see our relatives, play Holi or cherish sweets together like we used to.

So, this year, Daag Acche Hain was about being together from a distance.

Explaining the idea behind the latest ad, Narasimhan said, “This year is a bit different as we are all still reeling from the effects of the pandemic, which has created both physical and emotional distances. Addressing the emotional needs of the vulnerable segment of population, the ad shows how a young boy endeavors to include the elderly in the festive fervor through a simple yet creative way of making colors reach where hands cannot. It is a natural extension of our brand philosophy of ‘Daag achhe hain’, in which we have always shown children getting dirty while doing good deeds and demonstrating good values. We do hope that people are inspired to find their own unique ways to connect with their families this festive season.”

“And our current Holi campaign takes forward its unique 'Daag Acche Hain' brand proposition and continues to use colours as a medium of ‘togetherness’. This year, it shows how the colours of Holi can help bridge emotional distances and bring hearts closer, despite physical distancing,” she added.

Over the years, Surf Excel has tried to mirror the ever-changing socio and political issues in its campaign and reminded us that the most powerful virtue is kindness. It has been able to carve a niche for itself in the market through this powerful proposition. 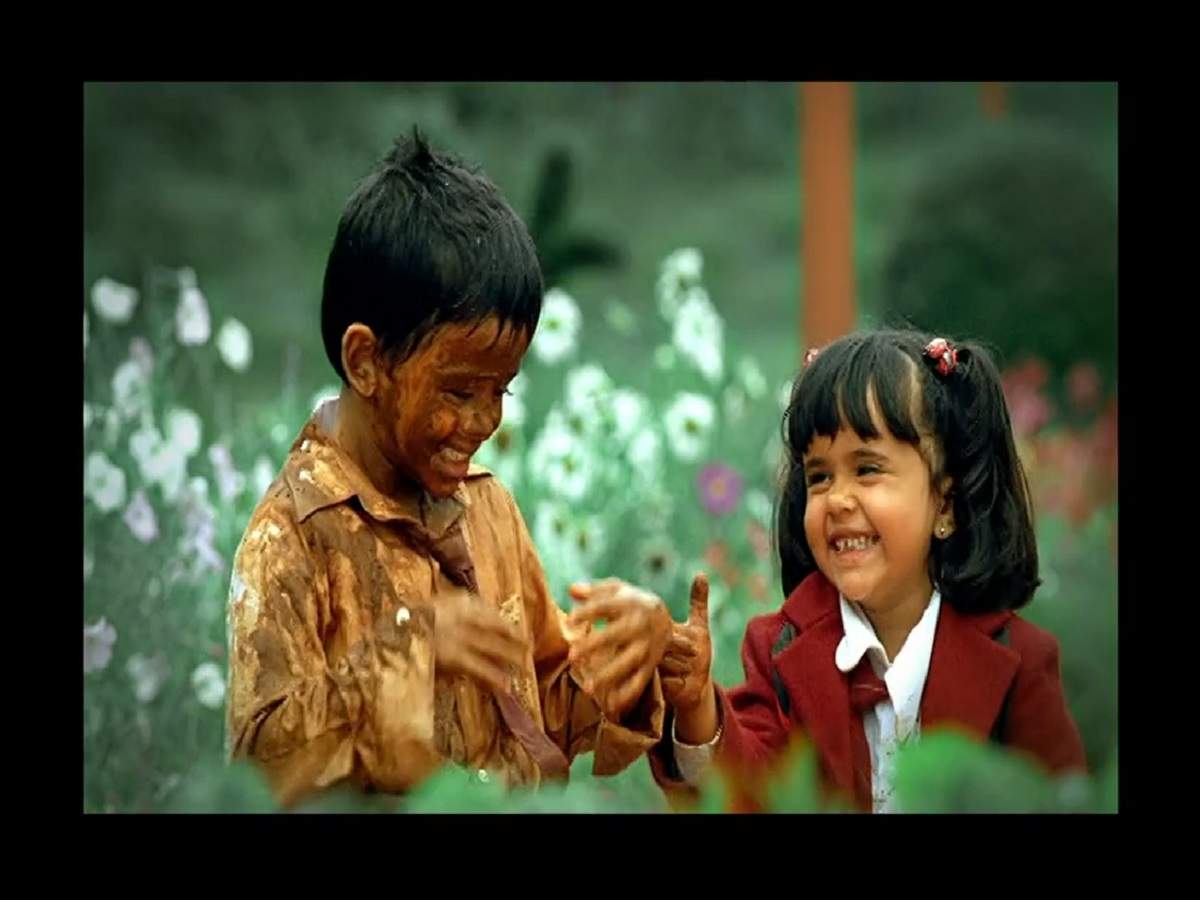 #BTSwithInsiders: Arun Iyer on how Surf Excel’s ‘Daag Acche Hain’ came into being

OPINION: Regulation of games of skill under a central legislative regime is the need of the hour
L. Badri Narayan
Apr 21, 2021, 17:31 IST