Consumers should put their foot down and not accept problematic content: Sushant Divgikar
Karuna Sharma
brands

Karuna Sharma
Consumers should put their foot down and not accept problematic content: Sushant Divgikar
Actor, psychologist, LGBTQIA+ activist, Content Creator, one of the most beloved drag queens in the world and an amazing singer -- Sushant Divgikar clearly wears many hats. Even though they have pretty much tried everything, Sushant still feels that they have a long way to go and many new areas yet to explore.


They started their journey 15 years ago by starring in a car advertisement as a model that was about inclusion in different careers, then did an advertisement with Abhishek Bacchan for Idea and their most recent short film was with Netflix. It was after 20-25 advertisements that Sushant got a call to star in a television show and the rest is history. Today, Sushant Divgikar has 1.1 million followers on Instagram.

Beginning of Sushant’s career: struggles and silver linings
After their MA in psychology, Sushant wanted to be a psychologist but TV opened up a different line of career for them.

Sushant took us back to the day when they started working. “Back then, not a lot of people were out of the closet. I didn’t go to the auditions saying that I am gay or non-binary. I went to these auditions as an artist. There were people who were accepting of this, who judged on the basis of the role -- whether the person auditioning fits the role and it didn’t matter to them what gender they are or what’s their colour. At the same time, there were people who were severely homophobic and transphobic. They said things that would get them cancelled today but back then, it was a norm to make fun of marginalized communities. So today, when I see representation improving, it really warms my heart,” shares Sushant.

But it wasn’t always easy for Sushant to find roles that they wanted to do. They weren’t offered good scripts with real work that represented the queer community as it truly is.
Sushant told us about their first horrible audition. “Brands now think 'I am not too gay or too non-binary' to sell their products. In my first audition, I walked into the room and I was told 'Oh no no, we don’t need you. You are too gay for this.' It was for a toothpaste brand. What do you mean too gay for this role? I might be gay but even gay people brush their teeth and I have beautiful teeth. Product and the artist shouldn’t have a gender associated with it. So, are you telling me that there is a special transgender toothpaste that I should use? Or do you drink straight coffee? But people have started understanding it and they are evolving every day.”

“I am still using that product after 16 years,” confessed Sushant with a chuckle.

Sushant believes that social media platforms such as Instagram, YouTube and Facebook have played a huge role in helping people across the spectrum voice their opinions.
Highlighting how social media is a silver lining for queer folks, they added, “It is so beautiful that we have the power of social media today; there are so many queer people who have the power of creation, which we didn’t have when we were 16. Today, young queer artists and people have the power to put their content out there for the world to see. So of course, times have changed, technology has advanced and society is constantly changing. Things can only get better from here.”

Sushant told us that they now wish they hadn’t done a few TV projects when they started out. They wanted to use this platform to apologise to those who were affected by the content of a judging TV reality show they were a part of.

“Let me take this opportunity to apologise for doing content when I was younger. I didn’t have a choice, I got sh*tty scripts but I had to take up at least one show a year to pay my bills. For queer people, we didn’t have scripts at all that respected us or normalised the conversation -- they only sensationalised it. We were in the background then, we were clapping or begging or cast as sex workers. These were the roles I got. I always asked that there so many transgender people who are lawyers, doctors, engineers; Why don’t we show their journeys? I had done a show where I was judging people for what they were wearing. So I feel sorry about that. But today if I get a script like that, I will tear it and throw it in their face,” says Sushant.
Making drag more accessible

Rani Ko-He-Neur was officially born in a club called Kitty Su and got her first break in a singing television show in 2018. She lives by RuPaul’s words, “We are all born naked and the rest is drag.”

Telling us about why drag needs more acceptance in India, Sushant says, “When I look at newer artists and performers, I don’t see their gender. I just see their talent. Drag has a very big cultural reference in our mythology and heritage. We haven’t given it as much importance because whatever challenged gender stereotypes, heteronormative outline of society, patriarchy and toxic masculinity, we brushed a lot of that under the carpet. At the end of the day, if you brush so many things under the carpet, it would become tough for you to walk on that carpet. So, I wanted to change all these notions. Through drag, I wanted people to understand that there are so many intersexualities in gender. I use platforms like Instagram, print, television, film to help people understand there is not only ‘male and female’ and art has no gender. We shouldn’t comparmalitise art by saying that ‘a woman shouldn’t do martial arts and men shouldn’t do Bharatnatyam.’ So, I wanted to challenge that. Drag in India is also a very big political statement because it challenges people to realise that you have sidelined an entire community of crores of people.”

Queer representation in advertising and marketing
Pride month is coming to an end and brands this year have been rather quiet. The conversation was limited to social media, we are yet to talk about equal LGBTQIA+ rights on traditional platforms such as television or out-of-home. Even on social media, it is more about jumping on a trend, changing logos or the most ‘woke’ act you can expect from a brand today is to launch a limited edition merchandise for queer folks. Only a few brands try to move beyond this tokenism. Sushant has played an active role in educating people around them and especially in the marketing industry, one campaign at a time.

On how brands can be true allies, Sushant tells us, “I really believe that these people who pink-wash or rainbow-wash, should really go see the ground level work that people are doing. If you are not a part of that change or revolution, then please take your marketing strategies and sit on it. We are not interested. We don’t need you to say that you will create a rainbow filter for us. We need you to walk the talk and be good allies. You should treat people with respect, give them equal playing grounds, equality in payments, equity at the workplace and then you can put a rainbow filter. But if you put a rainbow filter and expect us to give you our money, I don’t wanna buy all this sh*t.”

Advertising industry is also infamous for perpetuating stereotypes and furthering sexist ideologies to some extent. Several artists have spoken against straight actors playing LGBTQIA+ roles in the industry. There are still cis-gender, heternormative people playing queer in ads and then most of these ads are made by cis-het men.
“It wasn’t until OTT platforms entered into our country that we spoke about superficial work in Bollywood. So many directors and artists got a platform to show their authentic artistry, which was not fabricated. Times are changing but we have perpetuated these stereotypes, made fun of transgender people and celebrated songs that say ‘ ye tangdi kabab hai’ in Bollywood. We have celebrated abuse. So let’s start by asking these questions to ourselves. Till we don’t revolt and say stop with this dirty content because we don’t deserve it, we don’t need it and we are not here for it -- till we put our foot down as consumers and stash it, we will have to keep watching stupid cinema,” says Sushant.

For them, Vicks’ ad starring Gauri Sawant is that piece of work that got everything right.

Sushant is now eyeing to work with Zoya Akhtar and Vidya Balan. While they have developed a screening process by now and can afford to say no to problematic ads, Sushant is open to working with small brands and artists as well. “I just wanna work. I don’t care about how big the brand is, as long as their messaging is clear, doesn’t harm anyone in any way, aligns with what I believe in, then I am working for you. It could be Rs 10,000 or 10 lakh, I am open to working with you,” tells Sushant.
Sushant also gave a beautiful piece of advice to young artists on Instagram and other social media platforms. “Do what you want to do, with all your heart and conviction because when you put your soul in it -- it will surely be a masterpiece. If somebody gives you constructive criticism, it is your choice whether to take it or not. Even if you ask for it, they will only give an ‘opinion.’ That opinion shouldn’t be the narrative of your reality. You have to write your reality. Just go ahead with your purity and authenticity of your content, take that plunge and just fly. The world is such a big place, don’t restrict yourself,” says Sushant. 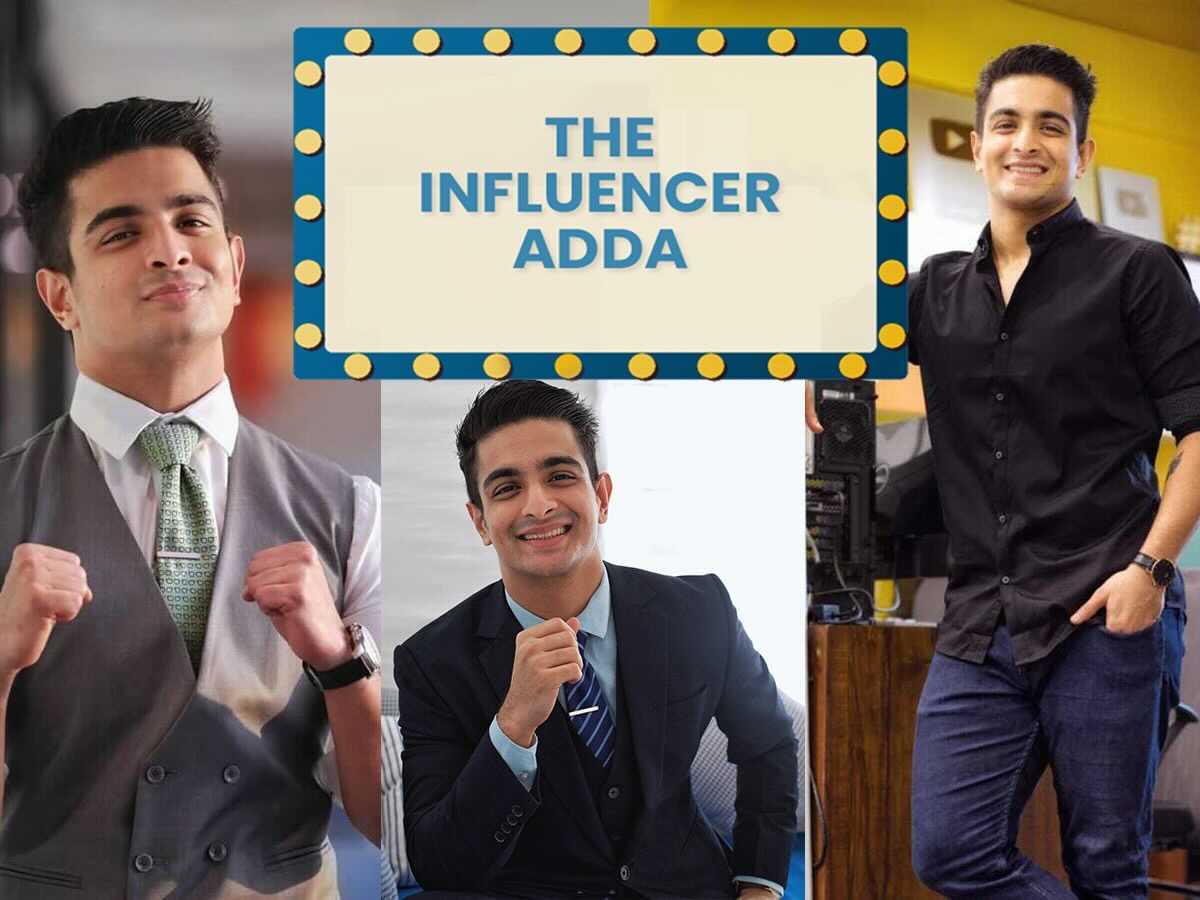 Ranveer Allahbadia on finding his true calling, learning from his mistakes and goal to collaborate with Virat Kohli

Consumers should put their foot down and not accept problematic content: Sushant Divgikar