The top creator economy news of the week includes an inside look at TikTok's workplace culture and the top affiliate-ma...
Amanda Perelli
advertising

The top affiliate programs that influencers use to recommend products

Amanda Perelli
The top creator economy news of the week includes an inside look at TikTok's workplace culture and the top affiliate-ma...

Hi, this is Amanda Perelli and welcome back to , our weekly rundown on the business of , creators, and social-media platforms. Sign up for the newsletter here.

In this week's edition:

Send tips to aperelli@insider.com or DM me on Twitter at @arperelli.

The top affiliate-marketing programs for influencers

The commission-based model is one of the most straightforward and accessible ways that influencers can start earning money: share a trackable link to a product or service, and make a percentage of sales.

Sydney Bradley and I highlighted the top affiliate-marketing networks used by influencers in 2021.

Here's a look at a few of the programs that made the cut thanks to high commission rates, access to top brands, and robust interfaces and tools:

Here's the full list of the top programs catering to influencers.

Inside TikTok: How ByteDance's culture principles are used to reward and reprimand

Every tech startup has its own culture, and we got an inside look at 's. Employees at the video app must abide by a set of six workplace principles - dubbed "ByteStyles" - written by its parent company ByteDance.

The company rules are often fairly broad, like "be grounded and courageous" and "be open and humble."

Internally, staffers use ByteStyles as a way to call out what the company deems good or bad performance during employee evaluations, my colleague Dan Whateley wrote.

While adhering to ByteStyles can lead to gifts or awards, not following the cultural tenets can lead to discipline.

Their open-ended nature can be frustrating when applied to specific work situations, according to four current and former TikTok employees. Sometimes ByteStyles are used as catch-all warnings to employees about behavior that the company didn't like.

"'That's not ByteStyles!' is like so general, but thrown around [when] anyone kind of does stuff the other person doesn't like," a current TikTok employee told Insider.

Read more about the principles and how they impact TikTok's culture.

Here's what else you need to know this week:

Her tip for scoring those brand deals? Slide into the DMs. She landed her first paid deal last year after reaching out to Personal Capital, a personal wealth management company, over DM.

I spoke with Dunlap who shared templates for other influencers to use and said not to fear rejection.

"Just because they said no now, doesn't mean that's no forever. I have 2 million followers and I still get 'no' a lot," Dunlap, who is 26, told Insider.

How a chef went from laid-off to TikTok star

She started filming TikToks of easy-to-follow recipes during the first UK lockdown in March 2020, after she'd been let go from her job as a chef in London.

Now, she says she's surpassed her old salary and has a cookbook in the works.

Read her essay on how TikTok turned her career around.

Chart of the week: 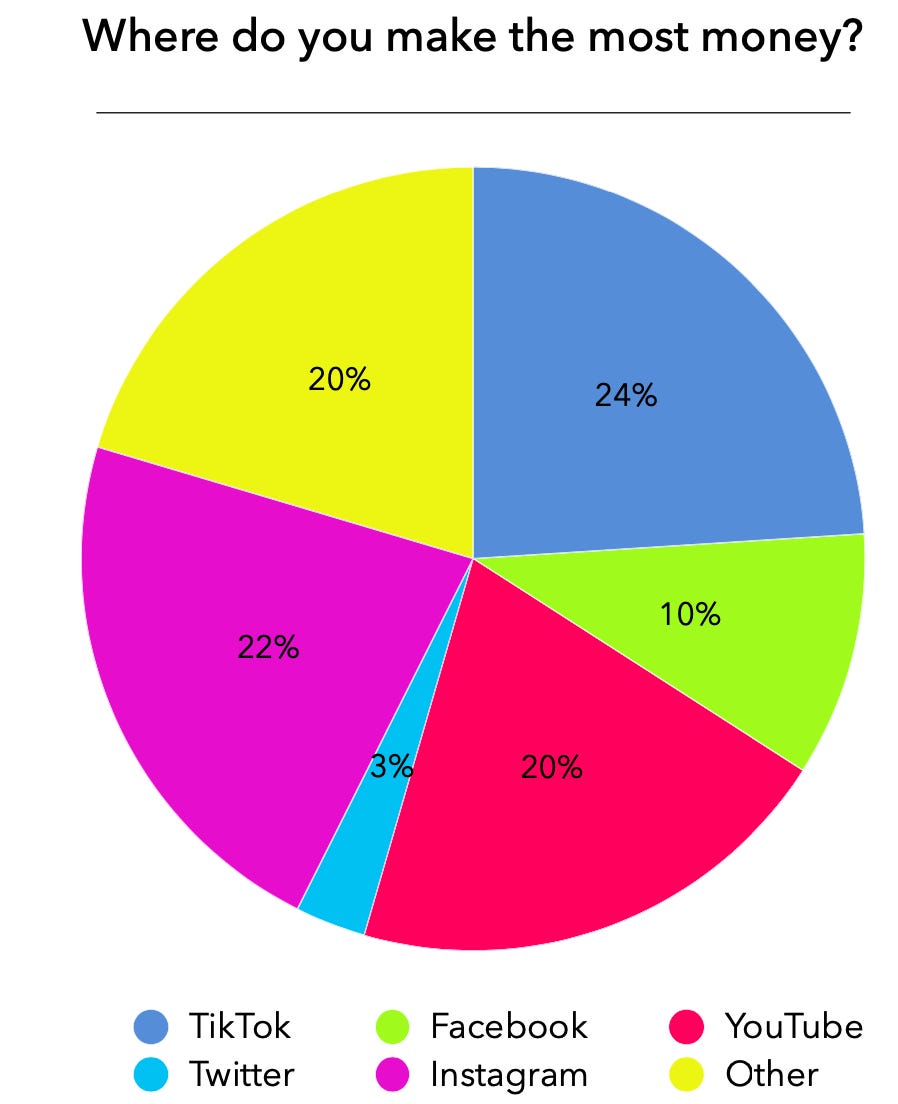 The Influencer Marketing Factory released a creator economy report, with insights from executives at Patreon, Koji, and Jellysmack. In the chart above, influencers share which platform is the most lucrative.

Check out the full report here.

TikTok hashtag of the week:

Every week, we highlight a top trending hashtag on TikTok, according to data provided by Kyra IQ.

What else we're reading and watching:

And before you go, check out the top trending songs on TikTok this week to add to your playlist. The data was collected by UTA IQ, the research, analytics, and digital strategy division of United Talent Agency.