A recently departed senior official from the FBI said yesterday that the answer is yes.

But we've done some homework and the answer is more complicated.

Early yesterday, the Washington Post published a story headlined "I Helped Save A Kidnapped Man From Murder. With Apple's New Encryption Rules We Never Would've Found Him."

It was a guest article for the Post, written by Ronald Hosko.

Hosko is the president of the Law Enforcement Legal Defense Fund a charity with a mission to "support and defend the law enforcement profession."

Previously, Hosko was the assistant director of the FBI's criminal investigative division.

In the story, Hosko said that earlier this year, he was a part of case in which law enforcement's ability to access data on a smartphone allowed it to prevent a man's murder.

Shortly before I retired as assistant director of the FBI's Criminal Investigative Division in April, I watched a bizarre kidnapping unfold. An older man was tased, beaten and zip-tied, then forcibly taken from his home in Wake Forest, N.C. The victim was the father of a local prosecutor who'd helped try members of a violent, nationwide gang.

Hundreds of FBI, state, and local law enforcement personnel worked tirelessly to find the victim and kidnappers. Once we identified potential conspirators, we quickly requested and secured the legal authority to intercept phone calls and text messages on multiple devices.

That led us to the victim, just minutes before his life was to end. He'd been locked in a closet in a vacant public housing project apartment in Atlanta, hundreds of miles from his home, quietly awaiting his own execution.

Then Hosko said that the kidnapping were to happen today, new privacy software from Apple and Google would have lead to the kidnapping victim's death. 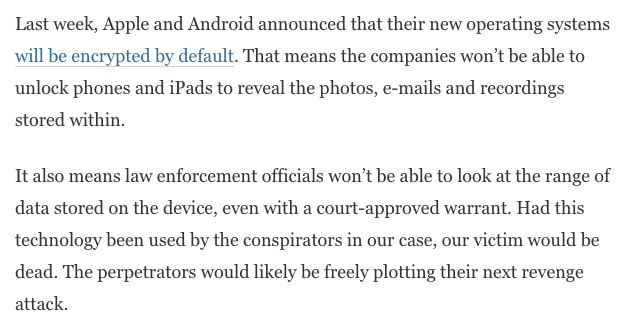 Hosko went on to say that inevitably, Apple and Google's new encryption defaults will lead to more deaths.

The updated version still claimed that the kidnapping victim in April would have died if Apple and Google's software were set up the way they are today.

With the changed language in bold, it reads:

Last week, Apple and Google announced that their new operating systems will be encrypted by default. Encrypting a phone doesn't make it any harder to tap, or "lawfully intercept" calls. But it does limit law enforcement's access to a data, contacts, photos and email stored on the phone itself.*

Had this technology been in place, we wouldn't have been able to quickly identify which phone lines to tap. That delay would have cost us our victim his life.The perpetrators would likely be freely plotting their next revenge attack.*

Then, late last night, the Post updated the story again. This time all language claiming that the victim in April would have died is gone.

With the changed language in bold, it reads:

Last week, Apple and Google announced that their new operating systems will be encrypted by default. Encrypting a phone doesn't make it any harder to tap, or "lawfully intercept" calls. But it does limit law enforcement's access to a data, contacts, photos and email stored on the phone itself.

That kind information can help law enforcement officials solve big cases quickly. For example, criminals sometimes avoid phone interception by communicating plans via Snapchat or video. Their phones contain contacts, texts, and geo-tagged data that can help police track down accomplices. These new rules will make it impossible for us to access that information. They will create needless delays that could cost victims their lives.*

Clearly, someone got to the Washington Post's editors and convinced them Hosko's original view was incorrect.

We did some homework into exactly how Apple and Google's data encryption changes will effect law enforcement going forward.

The most important thing to know is that phone calls and text messages have always been, and continue to be, intercept-able by law enforcement through co-operation with wireless carriers. Also, that type of communication was not encrypted in April and it's not encrypted now. Further: Apple and Google have never been involved in that legal process. If cops want to tap a bad guy's iPhone, the cops have to go to AT&T or Verizon or whomever the bad guys pay every month for data and voice.

The next thing to know is that, when it comes to Apple devices, iMessage and Facetime have always been, and continue to be, encrypted. Communication through those products was never intercept-able by law enforcement - not back in April and not now.

There has been one big change between April and now, when it comes to iMessage, however. Back in April, law enforcement would have been able to get a warrant to break into the kidnapper's phone and see if any iMessages were stored on the device. Perhaps the cops were able to see the bad guy chatting with his buddies about the location of his secret hideout.

Today, after the rollout of iOS 8, the cops might not be able to do that. That's because in iOS 8 stored iMessages are encrypted - kept behind a password that only the owner of the phone knows. The same goes for everything else stored on the device including emails and photos.

The only way the cops would be able to see saved iMessages, photos, and other data the bad guys stored on their phones today, after the rollout of iOS 8, would be if the bad guys backed up all that data to iCloud OR to another device, such as a laptop or desktop computer. iCloud is not encrypted the way phones are, and all the data is stored on Apple's servers. It can be accessed under warrant. Likewise, most laptops or desktops don't have the encryption that iOS 8 has.

When it comes to Google, the situation is basically the same: intercepting phone calls and text messages has nothing to do with Android encryption. Backed-up data on the device, however, is less available to law enforcement now.

The bottom line is that unless law enforcement used saved iMessages or photos to save the kidnapping victim in April - and the bad guys did not back up their phones to the Internet or to other devices - the good guys would still be able to get all the same intelligence on the bad guys today as they did back in April.

On the other hand, it is true that because Apple and Google have responded to customer demands for more privacy, law enforcement has lost out on one or two ways in which they previously were able to spy on alleged bad guys.

Does that mean more people are going to be murdered? We don't know. But then, neither does Hosko, and that's why his Washington Post story had to be updated.