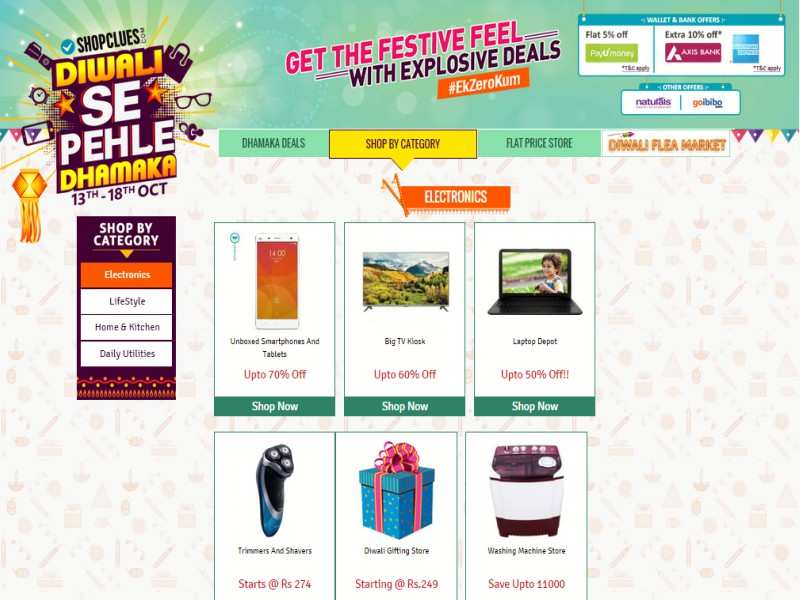 Advertisement
As another pre- Diwali weekend draws near, the festive rush is set to hit malls and brand stores harder than ever before. However, look away from the glitz and you land on India’s fertile ground of flea markets. Make-shift stalls and dingy lanes bustling with activity.

While the ‘Big’ sales from the ‘Big Daddies’ of Indian ecommerce are making it ‘Big’ with their epic numbers, tucked neatly in an online parallel universe is an online flea-market that’s raking in serious moolah with its Diwali Flea Market – ShopClues.

“We’re not limited by minimum price-limits. Ours is a price-point marketplace. We promise to give you the largest selection of shoes, or shirts at the cheapest prices. There is value to be given from lesser known brands”, Sanjay Sethi, CEO and Co-founder, ShopClues says.

ShopClues is the local market you totter to if you want to tighten your purse strings to save something for your girlfriend. As long as you don’t have incorrect expectations from the products you buy here, you’re good to go. If you’re hell bent on a Louis Philippe shirt, rather go to Myntra or Flipkart.

But what about the merchants? Would they like be associated with the risks of unorganized retail while transacting online? Looks like they’re game.
Advertisement

“When I returned from the US I thought about this long and hard. Why would anyone buy from us and not a Flipkart or Amazon. If the merchant has an option, they would want to sell everywhere. However, where one opens shop depends on what he wants to sell. Today we have 2.5 lakhs merchants on ShopClues”, Sethi says.

However with unorganized sectors, the risk factor is bigger. It seems easier to fake prices in price-point markets like Home and kitchen, Apparel or Jewellery.

“You’ve nailed it. That’s exactly why we’re doing it and nobody else. It’s our job to build the same comfort around a flea market as a mall. You get products at prices of a Sarojini Market and are still protected. You need enough leverage on the merchant’s side for that. However, misrepresentation of a product is wrong and is not encouraged”, Sethi states.