Brick and mortar businesses will be dead by 2023: Amitabh Kant 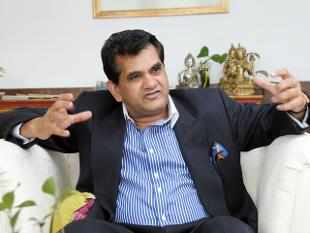 Niti Aayog, CEO, on Saturday said that there are chances that the brick and mortar business in India may cease to exist in the current form by 2023, considering it’s an increasingly digitalized world we live in today.
Advertisement

Kant, who was speaking at the and organized , said brick and mortar businesses will move towards ecommerce, which means companies will be increasingly driven by technology.

As products and services move online and the world gets connected, traditional businesses will have to go digital, something that is already clearly visible in the retail industry.

"We are just close to $ 18-19 billion market in e-commerce and take it from me we will be a $300 billion market by 2023. E-commerce is at the very beginning of its radical revolution and as the Internet and smartphones grow, you will also see leapfrog in technology," he said.

Advertisement
He further explained that the traditional banking sector in the form of brick and mortar presence banking will soon face a decline.

"It will all be mobile, telephonic transaction. India will leap frog again. This is because today we are about 350 million using the Internet but 2020-23 there will be about 1 billion people in India using the Internet. Similarly, usage of the Internet will increase with more people on smartphones. A billion Indians with access to the Internet, biometric and using the smart phones we will radically alter the world," said Kant

“Even manufacturing world is getting digitised and the small and medium enterprises must understand that it is digitisation of manufacturing process which will lead to higher level of productivity," he further added.

“Across the world, whether you look at trends in Japan, US or Germany, everywhere is getting digitised. It is inevitable," he said.