SCMP
Sep 30, 2019, 13:21 IST
S tep aside Cyber Monday, forget Black Friday and watch out Singles’ Day. India is home to a shopping festival that hopes one day to eclipse them all, even if it hasn’t settled on a name for it yet.

Much like Thanksgiving in America and November 11 in China, Diwali – India’s festival of lights – has come to assume a whole new meaning for the country’s bargain-hunting shoppers.

In the run-up to Diwali, online retailers slash prices on everything from newly launched smartphones to home appliances and the latest fashions in the hope of cashing in on a tradition that sees Indians celebrate with a splurge of new purchases.
AdvertisementThis year’s festivities promise to be the biggest spending yet, as Amazon and Walmart-owned Flipkart launch rival sales in a head-to-head battle for market dominance.

But while the companies may brand their sales differently – Amazon’s is the ”Great Indian Festival”; Flipkart’s is “Big Billion Days” – consumers could be forgiven if they struggle to tell them apart. After all, the events will run at the same time, from September 29 to October 4, and under a new law no item can be sold exclusively by either platform. Besides, most consumers are after just one thing: a bargain.

Besides, most consumers are after just one thing: a bargain. 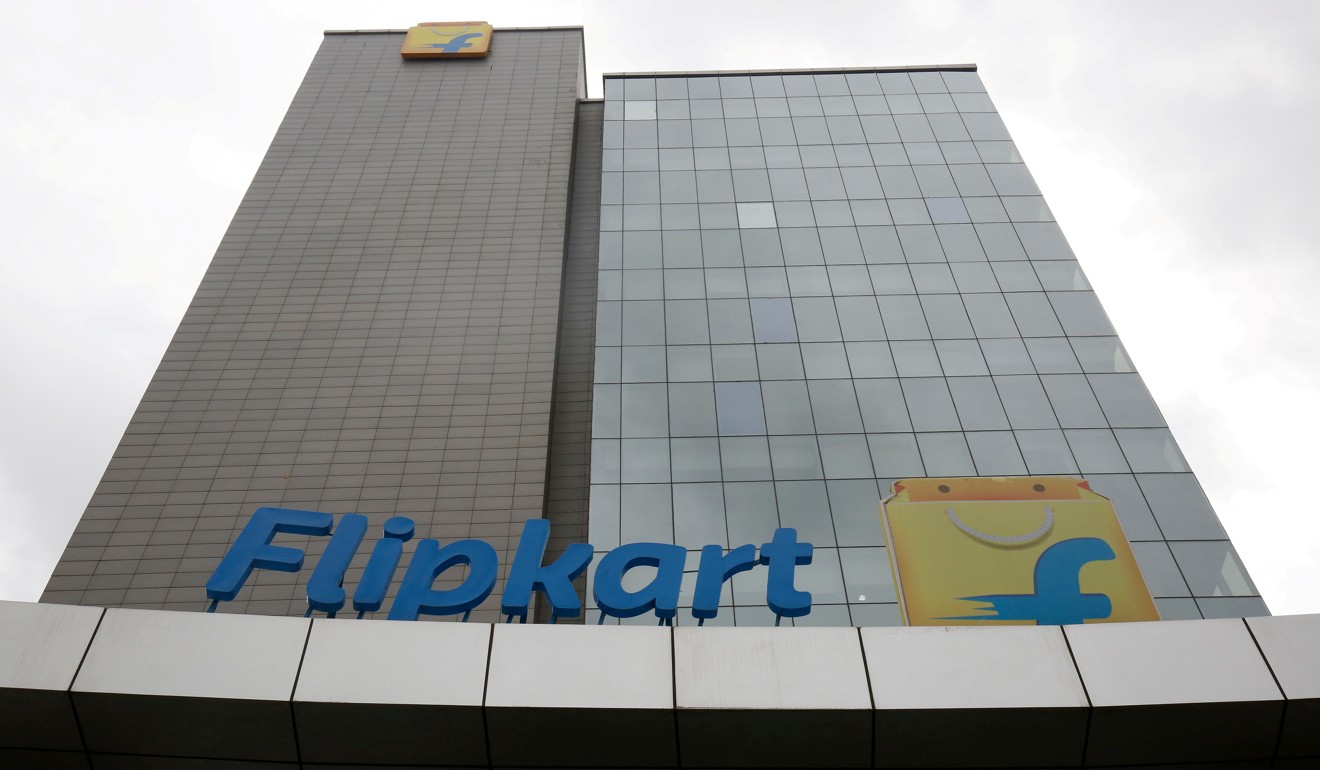 “I usually plan to buy any electronic or electrical items during this period only,” says Surya Chandra, a software engineer based in Bangalore who has been eagerly anticipating this year’s sales. “I wait until the sale is announced. This time, I’m planning to purchase a mobile phone for my mother.”

Chandra is far from alone. Such is the demand that Amazon and Flipkart have hired an additional 140,000 temporary staff to ensure things go smoothly.

Forrester Research estimates US$4.8 billion will be spent during the month from September 27 to October 29, 80 per cent of which will be during the sales period. Amazon and Flipkart have not released their estimates regarding spending habits in the sales period. Advertisement
Satish Meena, a senior forecast analyst with Forrester Research, says the goal of e-commerce firms is to change consumption habits rather than simply boost sales. “This time, they are trying to nudge customers to spend more online than offline, rather than trying to increase their overall purchases. So, if someone has a total budget of 10,000 rupees [US$140], the consumer is now being nudged to spend more than 5,000 of those rupees online.”

Discounts ranging from 10 per cent to 80 per cent along with cashback offers and options to pay in instalments are among the chief lures. 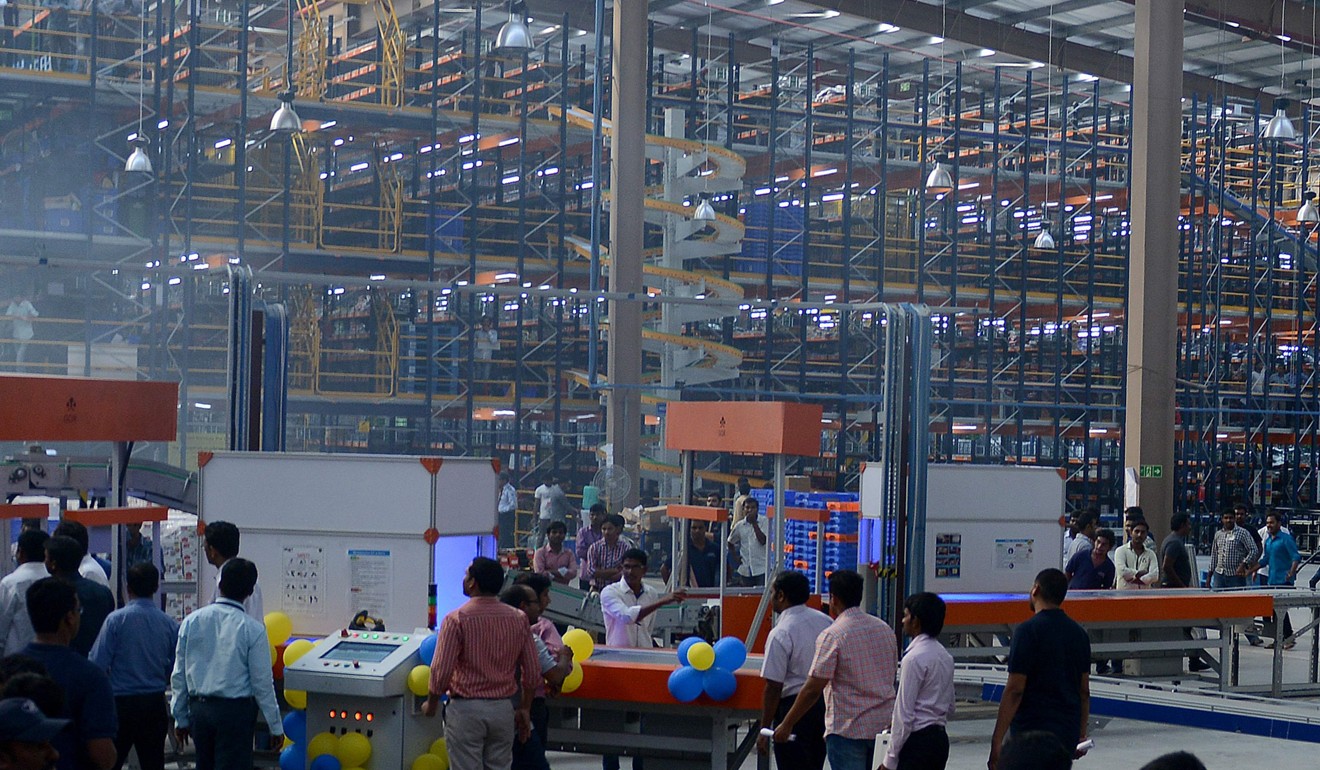 Employees at the launch of Flipkart’s largest ‘Fulfilment Centre’ on the outskirts of Hyderabad. Photo: AFP

“I have more options when buying online, and more time to compare and contrast all different options without being rushed by a salesperson as I would be in a physical store,” says Maya Walker, a researcher who has made several purchases over the sales period.

Online purchases have other advantages over bricks-and-mortar shops, too. Advertisement
“I find it easier to maintain warranty details for products bought online. It’s easy to lose physical bills or warranty cards, especially when you relocate,” Walker says.

Purchasers like Walker are expected to catapult the value of the Indian e-commerce industry to US$200 billion by 2026, up from US$38.5 billion in 2017, according to the government-funded agency India Brand Equity Foundation.
AdvertisementWhile not all agencies agree on this figure, none of them see anything other than enormous growth in the sector’s future. Though the Indian figures pale in comparison with China, where retail e-commerce sales are predicted to touch US$1.19 trillion this year, and the US, where consumers spent US$517.36 billion online in 2018, India’s growth trajectory is remarkable.

E-commerce to bike shares: How Chinese firms went from copycat to copy that

By most estimates, the world’s second-most populous country is home to its fastest growing e-commerce sector, with experts attributing the growth to rapid internet penetration, robust investment, improving digital payment infrastructure and digital-first initiatives by the administration of Prime Minister Narendra Modi.

The success is also partly attributable to the country’s burgeoning middle class. A recent survey by the brokerage firm Jefferies found that Indian online shoppers currently spend about 12,000 rupees (US$170) per year per shopper, and it forecast this figure to nearly double by 2030 as the number of items that can be bought online grows. Piquing shoppers’ interest are electronic items and accessories, which account for close to 40 per cent of all online sales, and lifestyle and apparel, which make up 25 per cent.
Advertisement The number of smartphone users in India is expected to cross the 800 million mark in the next few years. Photo: AFP

Retail is already the country’s biggest industry, contributing 10 per cent of India’s GDP. Accounting firm Deloitte predicts the industry’s value will grow to US$1.2 trillion by 2021, up from US$795 billion in 2017. During the same period, the number of online shoppers is predicted to quadruple from the current number of 100 million and the number of smartphone users is expected to cross the 800 million mark, suggesting competition is only set to intensify.

Manish Tiwary, Amazon India’s vice-president for category management, says reaching customers in the “farthest parts of the country” is central to its plans: “We are extremely buoyant for the upcoming Great Indian Festival. Amazon’s Great Indian Festival is a significant event for us, and it is a key element for us to bring the next 100 million customers online,” he says. Advertisement
“India remains a key growth region for Amazon and we are investing in all the things that are good for our customers as well as sellers. We are increasing the pace of our local innovations to overcome language barriers, digital payment complexities and infrastructure challenges and at the same time partnering with the ecosystem to transform lives.”

Until 2013, India’s e-commerce sector had been dominated by Flipkart – the country’s long-cherished unicorn launched in 2007 by entrepreneurs Sachin Bansal and Binny Bansal (the two are not related).

Amazon’s arrival heralded a years-long price war in which the two faced off with aggressive campaigns, ludicrous discounts and attempts at innovation. Advertisement
Last year, the competition heated up when Walmart acquired Flipkart in a deal that valued the Bangalore-headquartered start-up at US$21 billion.

The buyout, the world’s biggest e-commerce deal at the time, marked the end of the era of the Bansals, who have long been idolised by India’s aspiring entrepreneurs.

The deal also made India the battleground for a collision between two American behemoths. Advertisement
Now the market is braced for the entry of a third player in the form of the e-commerce wing of Reliance, owned by one of Asia’s richest men, Mukesh Ambani. Reliance has been making waves in various sectors in recent years with radical strategies that have shaken up both the telecoms and internet services markets.

Analysts say news of Reliance’s challenge, which reports say is in the testing phase at the moment, has already prompted Amazon and Flipkart to up their games.

“That’s why they are adding two more layers beyond price this year,” says Meena of Forrester Research. “They are not only playing on pricing but also on special offers and the overall customer experience, hoping to make it difficult for shoppers to switch to the new entrant.” Advertisement
It remains to be seen whether Reliance will hold its own sales period to coincide with Diwali. And when it does, however it’s branded, to most shoppers getting ready to celebrate the festival of lights it will mean just one thing – even more bargains.