Sriram IyerAug 26, 2019, 15:44 IST
Global markets continue to swing with the mood of American President Donald Trump. After a lacklusture Monday morning when traders around the world feared an escalation in the trade war between US and China, there was a late afternoon euphoria triggered by none other than the leader of the free world.

India's Sensex surged over 780 points on Monday after Donald Trump hinted at a thaw between US and China after "two very good calls". “China called last night our top trade people and said let’s get back to the table,” the president said after meeting Egyptian President Abdel-Fattah el-Sissi. “I have great respect for it.” A delegation from China is expected to travel to Washington in September to continue talks.

Great respect for the fact that President Xi & his Representatives want “calm resolution.” So impressed that they a… https://t.co/omV7rMfrkO


Trump last week hiked tariffs on China in a tit-for-tat response to similar move from Beijing. He also ordered American corporations to find alternatives to doing business in China, and threatened to declare a national emergency to enforce it before softening the threat Sunday.

All of these comments battered Asian markets-- the Chinese currency Yuan hit a 11-year low-- until the Monday mood swing that caught traders by surprise. By then, many Asian exchanges had shut for the day but India was still open.

Indian investors also had a government stimulus to factor in

Banking stocks led the rally after the Indian government revealed its plan to provide additional money to improve credit on Friday (August 23), aside from a slew of other measures to revive a sluggish economy. However, the market looked much less than excited. Even the rupee hit the lowest level in 2019, making it the worst performing Asian currency in August. 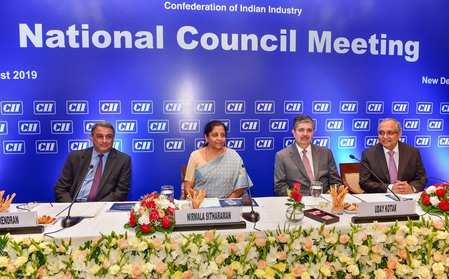 
Shares of Yes Bank and Indiabulls Housing Finance were among the top gainers on the NSE Nifty, rising over 3% each. Car makers started the day upbeat but the Nifty Auto index gave up the gains by the end of day.