EXCLUSIVE: Nigel Harris, Ford India CEO tells us the real reason why the Mustang was launched this year 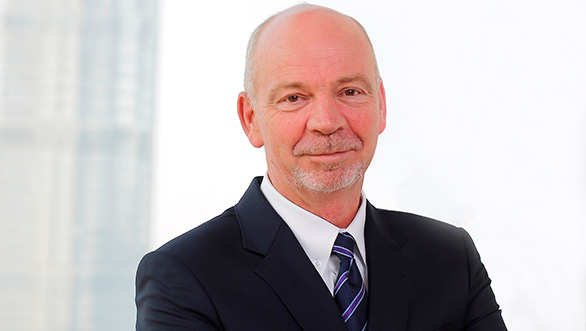 Even as Ford Mustang debuted earlier than others, the muscle car had all eyes on it as it was put up on display at the Auto Expo 2016.
Amazing OffersView all Offers

“Mustang is an iconic car. It’s a performance vehicle full of technology, an eye-catcher that people want to come and have a look at. There's huge demand for this muscle car globally and the interest for it in India has been incredible,” said CEO as Business Insider caught up with him for a chat on the sidelines of the Auto Expo.

TOP VIDEOS FOR YOU
With the unveiling of new generation Figo last year, the new Endeavour one month back and finally the Mustang, it’s for everyone to see that Ford has put forth a wide new range of cars into the market in the last of couple of months.

Advertisement
“What you see is a complete product transformation with all the products as opposed to just one. Mustang is the icing on the cake. And, all of this has happened in the last five months. So, there’s a Figo in the showrooms which is a 5-door hatchback, an Aspire which is a 4-door Sedan, Ecosport which is a leader in its own right in the SUV segment, Endeavour – this one is a generation ahead of competition in its segment, and now the Mustang,” says Nigel, adding that the wide product portfolio makes these cars extremely relevant in the Indian market, where buyers are increasingly growing cost-conscious and knowledge conscious.

And how is it making Ford cars relevant? Nigel cites an example: “We recently saw a customer in Ludhiana who had come to buy an Endeavour. He was buying a car for his father. His eyes fell on Aspire in the showroom and he felt it would be a better choice because his father wanted a smaller car, a sedan. He finally bought an Aspire.”

What’s more? The reform at Ford started with product yes, but it’s just not product-led transformation that is happening, there’s much more!

Advertisement
Nigel says there’s a complete brand transformation taking place here. Of late, Ford has focused itself on making its prices extremely competitive with regard to its parts, services and labour in the Indian market.

“We received feedback from our customers that they are not able to get Ford parts in the after automotive aftermarket. Moreover, we were shocked to learn that people here go to local technicians for car servicing. We saw a huge opportunity there. We not only have, therefore, changed the pricing on parts to make sure we are competitive, but we are also ensuring that these parts are easily accessible via our distributor network,” says Nigel.

Moreover, he says Ford is also changing the way it treats its customer.

Advertisement
“Ford is a family name. What we are working on is when we sell our vehicle, we want people to be a part of the bigger Ford family because this brand, to us, is not just a brand. It means reputation,” he says.

“Product, ownership experience via cost of ownership and in terms of family and relationships together is the brand transformation we need and that’s what we are trying to get across to the people in India,” Nigel adds.

So much about what Ford is upto. But, how does the company see the . Isn’t it going to affect the car sales? The India CEO says Ford is very well positioned to cater to the changing market needs because it has got four range of petrol and four range of diesel cars.

Advertisement
“There’s no argument when a country is looking for technologies to have clean diesel and petrol engines. Ford produces petrol and diesel engines itself. When we do our product and engine programs, we do it 3-4 years in advance. Because, we know that sudden or dramatic changes in policy destroys investments. Those investments have been made now for the domestic and export markets. Anything that is important for us is lead time to make the right decisions, to follow what market trends and government trends are. Secondly, we require consultation. We need to be told what’s going on and to have a voice in the process.”