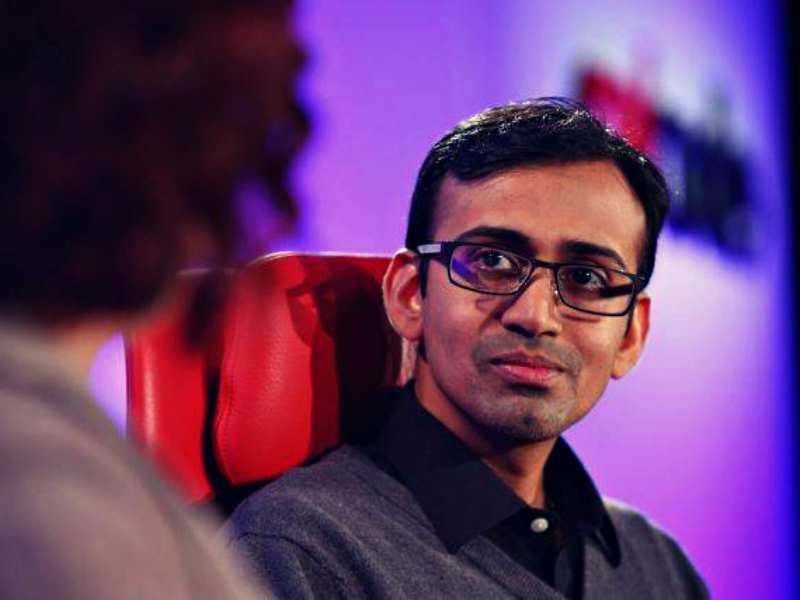 He’s the Product Head of one of India’s biggest e-commerce giants, and leads the product strategy for Snapdeal, FreeCharge and Shopo. That’s a lot on 38 year old Anand Chandrasekaran’s plate.

Business Insider sat down with Anand at his office, and got chatting about money. I mean the digital kind.

Why don’t you integrate , and Shopo? Advertisement For us, the insight is around what the starting point is.

When I’m on FreeCharge, I’m there to make a transaction. There is no browsing intent.

What’s with this ‘payments with a social twist’ ?
The intuition was that payments can be social, as opposed to shopping being social. We wanted to add human emotion to payments.
Advertisement

If I payed a coffee shop, I may want to say, “Hey, your Latte is really nice.” If you look at the vision of the company like Square, there is human emotion involved. You might want to add comments. It’s little things like that. Imagine your newspaper boy. You might want to ask him why he didn’t deliver for three days over chat.

You think a Coffee shop is willing to dedicate that extra time to anyone who buys coffee for a hundred bucks?
There is no one size fit all answer. I’m curious to see what kinds of things can get done here.
Advertisement There are educated people who don’t see themselves as shopkeepers handling POS terminals. It’s a simpler option to them. They don’t need to have a wallet account too.

It’s a little bit like saying; you’re launching it for all telcos, which telcos will use it more. We don’t know, but it supports all telcos. supports everyone who’s willing to set up a merchant ID.

Maybe it’s less the chain coffee stores, and more the small boutiques where people are willing to have a one-on-one conversation.
We’re as curious as anyone to see what the first one lakh merchants look like. Advertisement
Um…who’s your target user?
It’s a journey for us. We have an intuition about who this could be. It’s a natural outgrowth of how we’ve been growing over the last few years. My sense is that it’ll stimulate some innovative solutions.

From a timing perspective, people are thinking what more they can get done with the FreeCharge app.
Advertisement Chat n Pay is a made-in-India product, and takes into consideration little things that are specific to India. In cases where vendors request an advance, there is room for some negotiation. It’s not really haggling, but a small conversation, and a lot of human emotion.

Internally we say every family has a CTO, who’s the youngest member of the family. He/she gets the bills paid, does all the online recharges and brings everyone online. That CTO will first adopt this.

People who are already on a smartphone and use WhatsApp regularly will use it.
Advertisement Is there a problem scaling payments infrastructure because of the restrictions?
The RBI has made some smart moves. It’s all done with the right intent.

If a person is using his Rs. 10k limit, it’s a great place to be. Merchants are willing to commit a lot more to get their first transaction going with a POS terminal. Most will find it extremely reasonable to invest a small amount of time in place of that to submit their KYC.

Also, it’s done so that their money’s safe and secure. Advertisement
Merchants can integrate the FreeCharge SDK into their apps for free. Any plans to monetize that?
We’re still at an early stage. We’re also using this opportunity to collect valuable feedback from developers. One of them has been that if someone’s building a website, they would want a saved cards API. This critical feedback will become building blocks for our products.
We haven’t got to place where we understand the economics of how our products can work.

If somebody’s redirecting their money to FreeCharge, we’re happy the money to be within the network. Any network that puts money back in the wallet and then takes the money out creates the habit. This also brings liquidity, and that’s a good thing for the customer. Advertisement
The goal right now is to purely create that habit.

Why don’t you have the coupons tab in the FreeCharge app?
We found the whole idea of getting the right coupon in, and ensuring redemption happened created a lot of friction. A lot of customer feedback was around coupon redemption. It was a distraction from the core we wanted to focus on.
Advertisement Also, coupon redemption rates were low in general. Building these products is all about making strategic choices and tradeoffs. We focused on whatever made more sense.

Indians don’t mind free stuff.
In the numbers that we operate in, any decisions we make will impact customers. If we made a call and it impacted no one, we should have made it sooner. We only have so much space, and so many screens. We’ll have to make do with some tradeoffs.

Why have merchant products clutter the FreeCharge experience? Advertisement From a consumer perspective, we’re catering to the same vision.

He’s having 50 of these conversations, and why would he need to do that. Why!
Advertisement Image Credit: Indiatimes

Next StoryNot so Exclusive: Vijay Shekhar Sharma answers your Paytm FAQs
Popular on BI
1
OnePlus, the small tech company taking on Apple and Samsung, is about to launch a super-cheap 5G smartphone — here's everything we know about it so far
2
India’s Vice President launches a social media super app Elyments, which will take on Facebook, Instagram and WhatsApp
3
EXCLUSIVE: Instagram Reels is being quietly tested in India just days after the TikTok ban
Latest Stories
Trending News
Not so Exclusive: Vijay Shekhar Sharma answers your Paytm FAQs
Big consolidation awaits ecommerce industry as Alibaba, Tata may enter into a partnership
Will Paytm pave the way for Alibaba’s entry in to India?
COVID-19IndiaCases: 697kDeaths: 19.6kRecovered: 424k
COVID-19WorldCases: 11.12MDeaths: 528kRecovered: 6.16M
COVID-19USACases: 2.77MDeaths: 129kRecovered: 906k
COVID-19Access our Live Coverage
Popular Categories
Trending Right Now
More from our Partners