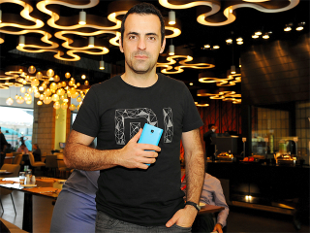 Former Vice President will join to lead its virtual-reality efforts, including the Oculus VR team.

In a Facebook post, its CEO said: "I'm excited that Hugo Barra is joining Facebook to lead all of our virtual reality efforts, including our Oculus team."

Barra, a former executive at , had announced his exit from Chinese smartphone maker Xiaomi earlier this week, saying he wanted to return to the .
Advertisement

"Hugo shares my belief that virtual and augmented reality will be the next major computing platform. They'll enable us to experience completely new things and be more creative than ever before," Zuckerberg said.

The post was accompanied by a digital rendering of the two executives, seemingly captured by Oculus's telepresence app.

In response, Barra said it had been his dream to work in virtual reality "even back when AR/VR were just figments of science fiction".
Advertisement

n a separate post on his profile, Barra said he is returning to Silicon Valley in a couple of months and will be joining Facebook as VP of virtual reality (VPVR) and lead the Oculus team.

"Xiaomi CEO Lei Jun always says that the highest calling of an engineer is to make technology breakthroughs quickly and readily available to the widest possible spectrum of humanity. That will be my mission at Facebook and I look forward to building the future of immersive technology with Mark Zuckerberg, Brendan Trexler Iribe, Mike Schroepfer, and the visionaries in the Oculus team," he said.

Under Barra, Xiaomi expanded outside of its home market, adding geographies like India, Indonesia, Singapore, Malaysia, and more recently 20 other markets, including Russia, Mexico, and Poland.
Advertisement

The top job at Oculus has been vacant since last month, when its CEO Brendan Iribe stepped down to run one of the other divisions.