Advertisement
SCMP
Jun 26, 2019, 09:58 IST
Hypermarkets, hailed as game changers in China's retail industry as recently as two decades ago, have been pushed aside by the popularity of smartphone-enabled payments and online shopping.
Advertisement

, the French retailer announced on Sunday, is selling an 80 per cent stake in its China operations to Suning, ceding control in a market that it had first entered in 1995.

"Foreign hypermarket brands are increasingly facing difficulties in making money from their Chinese businesses," said Jason Yu, the general manager of market research firm Kantar Worldpanel China. "For most of them, it is a critical time to readjust strategies due to the mounting challenge from the local e-tailers."

Carrefour's partial exit underscores the shift underway in shopping patterns in the world's most populous nation. China's e-commerce market is worth 2.24 trillion yuan (US$325.6 billion), growing by 15.3 per cent in the first quarter from a year earlier, according to the National Bureau of Statistics. As much as 23 per cent of total consumer spending took place online during the first quarter, reflecting growth of 1.6 percentage points from last year, while the share of consumer spending at hypermarkets eased to 20.2 per cent, a drop of 3.4 percentage points from 2014, according to Kantar. 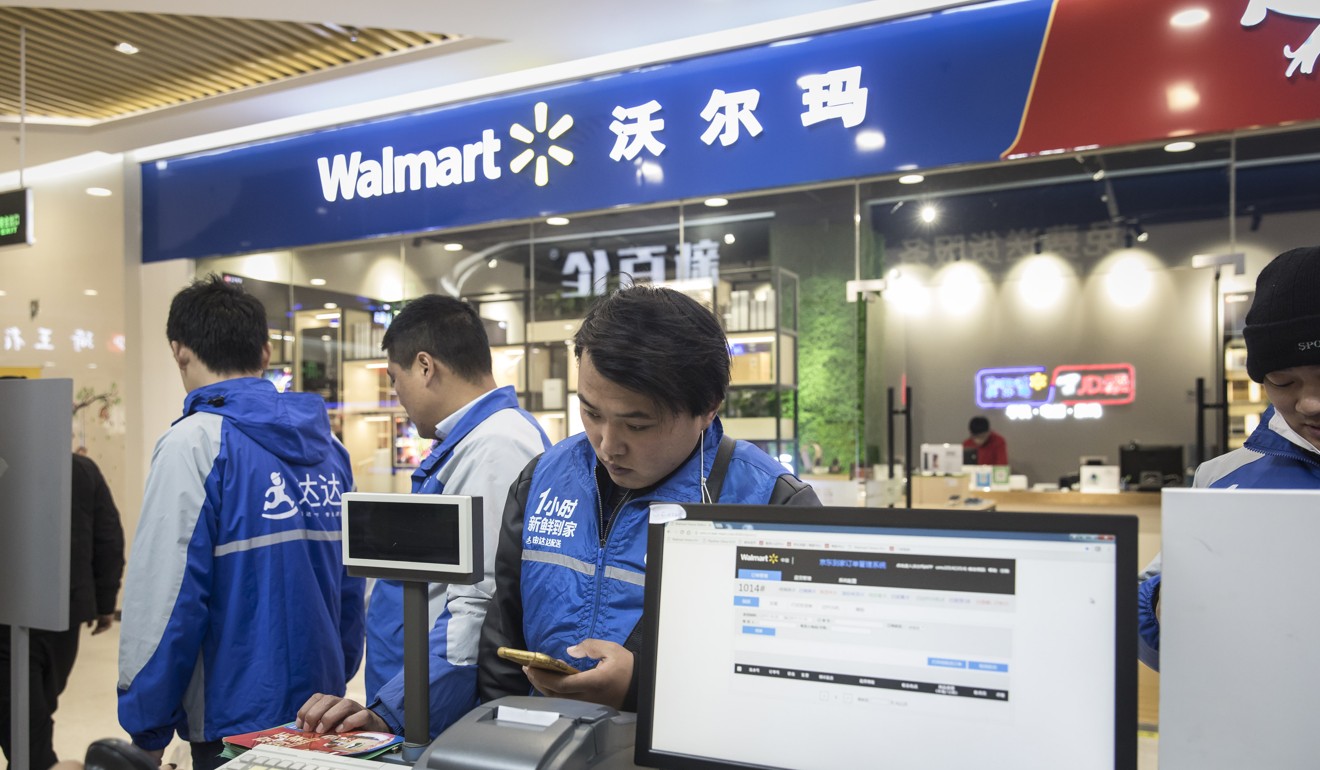 Advertisement
Foreign supermarkets and hypermarkets, featuring rows and stacks of consumer items, foodstuffs, clothing, appliances and furniture over tens of thousands of square feet, were the subject of awe and envy in China during the early days of the country's experiment with market capitalism.

Carrefour, Metro of Germany, Tesco of Britain, and even the Lotus supermarket chain operated by the Charoen Pokphand Group of Thailand, drew thousands of daily shoppers to their retail outlets.

For a period, hypermarket chains gained the upper hand over domestic rivals, including department stores, supermarkets and convenience stores.

Carrefour sells 80 per cent of its Chinese retail operations to Suning for 4.8 billion yuan

However, changes in the past decade, including the rising penetration of e-commerce, has led to a shift in consumer habits, led by young urbanites who rely on their mobile phones to place orders for items ranging from daily necessities to household appliances, cinema tickets and meals.

Advertisement
Yu said the trend of falling sales and profits at bricks-and-mortar retailers will continue in the coming years, amid the continuing growth in e-commerce. 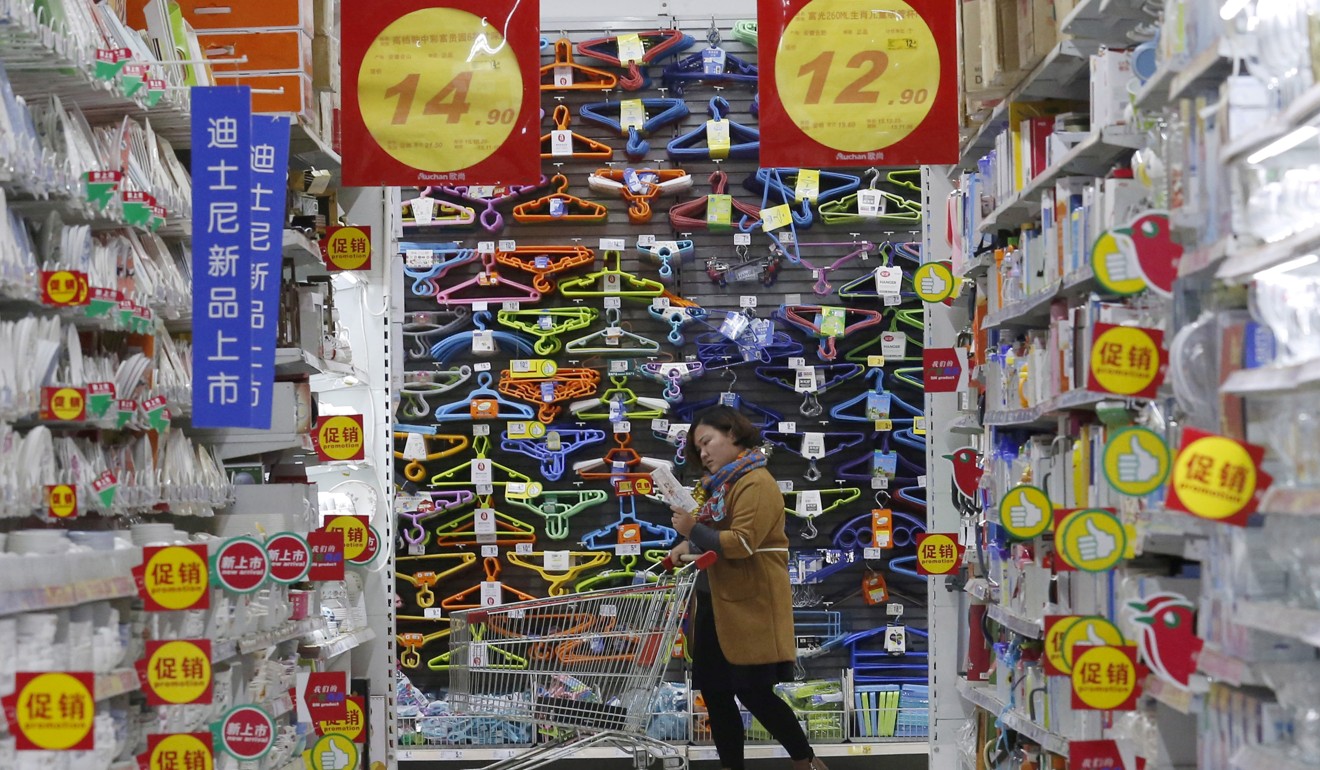 The latest data by Kantar showed that foreign retailers continued to lose ground in the segment of in China. The market share of French retailing group Auchan declined 0.1 percentage point from a year ago to 1.2 per cent in the first quarter of this year. Carrefour's 210 hypermarkets in China suffered a 0.3 percentage point erosion in market share to 2.8 per cent at the end of the first quarter on year. Meanwhile, US retail giant Wal-Mart had a 5.1 per cent market share in China at the end of the March-ended quarter, compared to a 5.4 per cent share a year earlier.

In 2013, supermarket chain Wumart Stores acquired most of the Lotus supermarkets on the mainland in a share-swap deal worth HK$2.3 billion (US$295 million).

"Since the digitalisation of China's commerce is an irreversible trend and foreign companies have no concrete IT infrastructure or complete logistics network on hand, they are underdogs now," said Eric Han, a senior manager with business advisory firm Shanghai Suolei. "Divestment and partnering with local competitors or e-commerce giants are the ideal choices."

Advertisement
Suning, which operates a network of 8,881 physical stores in China, said it plans to leverage its controlling stake in Carrefour China to reduce procurement and logistics costs.

"In the digitalised era, retailers need to grasp technologies including big data and to work out solutions that can better integrate online operations into physical stores offline," said Yu. "The name of the game is to build customer loyalty by offering them the best prices and shopping experiences."

In 2018, Carrefour's Chinese business generated net sales of 28.5 billion yuan, down 5.9 per cent on year. Its earnings before interest, tax, depreciation and amortisation stood at 516 million yuan.

Germany's Metro AG is also said to be offloading a majority stake in its Chinese hypermarkets business.

Advertisement
"China's retail market is still viewed as a gold mine to global players," said Chen Xiao, chief executive of Shanghai Yacheng Culture, a firm that deals with marketing and branding for retail companies. "As early comers quit, we still see growing interest from latecomers who believe their models can work in China."

China is the No 2 market in terms of the number of stores for French sports equipment company Decathlon. Decathlon operates 280 stores across more than 100 mainland cities and plans to double its work force in China to more than 30,000 by the end of 2022, according to a report by Xinhua.