Google’s Sundar Pichai interacts with students at IIT-Kharagpur. From his early days to failures in life, here’s what all he said 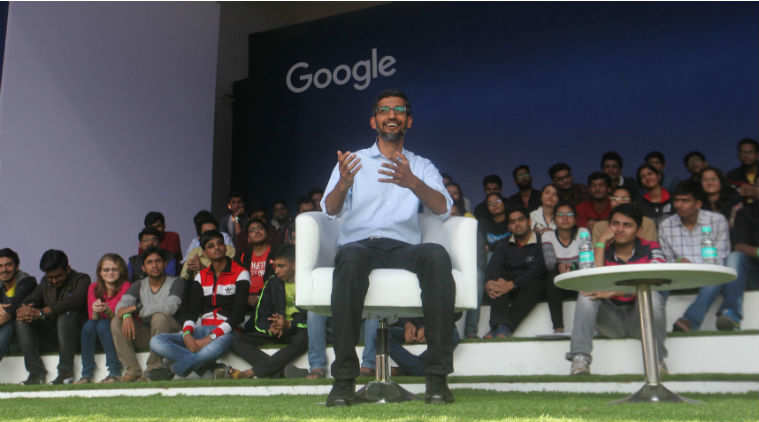 CEO was in IIT-Kharagpur, his alma mater, after 23 years and students at the campus were thrilled to meet the CEO of tech giant, bustling with questions. Nearly 300 students gathered to meet Pichai, who asked him a plethora of questions right from his hostel days to job interviews to life at Goodle. Students also asked him if it was possible to get a Google Doodle on IIT-Kharagpur.
Advertisement

During the interaction, Pichai said how India was important for the company and how the country was making strikes in digital landscape. Pichai said translations, AI, voice search, etc were making changes in the society and harped on how Google will be making pocket-friendly smartphones for India.

Pichai also shared some life lessons he got from IIT-K and at Google.

Pichai told the students to take risks, and be creative. This comes as a surprise in a country where parents often pressure their children from a young age to study hard so they can secure steady employment.

&ldquo;Academics is important but it is not as important as it&rsquo;s made out to be,&rdquo; Pichai said.

Advertisement
He also said that during his time in the prestigious institute, he stayed up late, slept through the occasional class and may even have earned a C in one course.

&ldquo;I worked hard but we did have our share of fun as well,&rdquo; he said.

Pichai, after graduating from there in 1993 went to study at and the Wharton School of Business in the U.S. and then joined the search giant in 2004 and was appointed chief executive in 2015.


Earlier, in New Delhi he outlined the firm&rsquo;s increased efforts to connect small businesses to the web amid its larger push to gain new users in the country of more than 1.2 billion.
Advertisement

He also said that India has the potential to be a &ldquo;global player in the digital economy,&rdquo; with more and more people getting online for the first time, especially on inexpensive smartphones but he also noted that only a small portion of India&rsquo;s population has yet to connect to the web, especially women in rural areas.

Near the end of his hour-long town hall, an earnest student asked Pichai for advice on how he could make the most of his four years on campus and his response was simple: &ldquo;I wouldn&rsquo;t overthink it.&rdquo;

(Image: Twitter)
NewsletterSIMPLY PUT - where we join the dots to inform and inspire you. Sign up for a weekly brief collating many news items into one untangled thought delivered straight to your mailbox.
CAPTCHA: