Ahead of Budget, India-Maldives to deepen defence, security ties 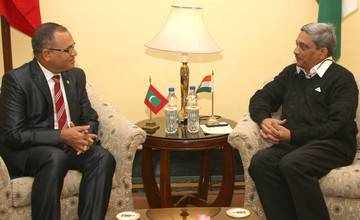 India and today decided to deepen bilateral ties, especially in the critical sector of defence and security.

Visiting Maldivian Defence and National Security Minister Adam Shareef met his Indian counterpart here this evening and held delegation-level talks during which it was decided that the two nations should deepen and broaden their defence cooperation, official sources said.

The development comes at a time when the Chinese are increasing their footprint in the archipelago nation.

Advertisement
China is several infrastructure projects across the Maldives. The governments electoral pledges, like building a bridge between capital Male and the airport island of Hulhule and development of its main international airport, also hinges on soft loans being considered by Beijing.

Chinese businesses, mostly state-owned corporations, have recently forayed into the Maldives with investments in areas such as the upmarket luxury tourism industry.

The Maldives also held its second investment forum in the Chinese capital last November.
Advertisement External Affairs Minister , during her visit to Maldives in October 2015, had said that India will always be the net security provider to the archipelago.

She, however, had stressed that it was important to insulate both nations from trends towards radicalisation and terrorism.