Preeti SoniJan 6, 2020, 15:10 IST
On January 5, , the president of JNU Students Union was brutally injured after several masked individuals thrashed students and teachers inside the campus with wooden and metal rods.

She was among the 20 other students who suffered severe injuries in the violence. She was admitted to AIIMS hospital yesterday and is now discharged.


JNUSU president Aishe Ghosh beaten by ABVP goondas who entered the campus with Lathis & other weapons She has inju… https://t.co/QXDNakXJOM

"The situation of the entire country is volatile. We are afraid. My daughter has been attacked, tomorrow someone else will be beaten up. Who knows, even I may be beaten up tomorrow," Ghosh's father said, hours after his daughter was beaten up inside the varsity campus.

Here’s a look at the life of Aishe Ghosh:
Aishe Ghosh, who comes from Durgapur, is pursuing MPhil/PhD from the School of International Relations, JNU.


Ghosh, who belongs to Student Federation of India (SFI), became the JNUSU in September 2019. She won with 2,313 votes of the total 5,728 votes. Before Ghosh, SFI didn’t have a for 13 years. Her agenda after becoming the president was to ensure that the union isn’t dissolved. Also, she wanted to continue to protest against fee hikes, hostel shortage and other problems.

Before enrolling herself into JNU, Ghosh did her undergraduate in Political Science from Delhi University. She joined JNU to pursue her Master’s degree in International Relations. She was also elected as the councillor for School of International Studies for two terms.

Ghosh has been at the forefront of several protests including the anti-CAA protests conducted by students in New Delhi.

At the JNU campus, she was protesting about the hike in hostel fee, and other amenities. Before the mob violence broke, she posted a picture urging students to speak against Akhil Bharatiya Vidyarthi Parishad (ABVP). ABVP was supporting the government stand on the controversial Citizenship Amendment Act (CAA). 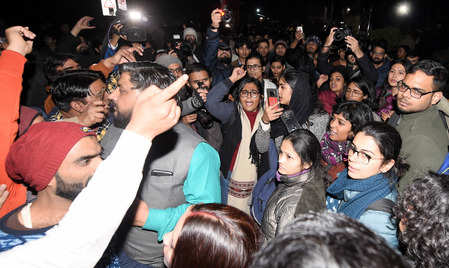