Advertisement
There exists a considerable overlap between the recently adopted United Nation’s (UN) Goals (SDGs) targeted to be achieved by 2030 and the social dimensions incorporated in the (SPI) developed by the Social Progress Imperative, a nonprofit organization based in Washington. The UN’s sustainable development agenda comprises of 17 goals pertaining to poverty eradication, lessening inequality and injustice and environmental challenges, particularly climatic changes and hold a global applicability, irrespective of the level of development of a nation. Likewise, the SPI captures comprehensively social progress of a country by incorporating various social and environmental indicators which have been distinctly grouped into three dimensions- Basic Human Needs such as food, water, sanitation, shelter, and personal safety; Foundations of Wellbeing for a better life such as basic education, information and communication, health , and environmental sustainability and thirdly, the Opportunity to improve one’s life through provision of rights, freedom , equality and access to advanced education. Figure1.1 highlights the overlap between the UN’s SDGs and the three dimensions of the SPI.

Figure 1.1: Overlap between the UN’s Sustainable Development Goals and the SPI 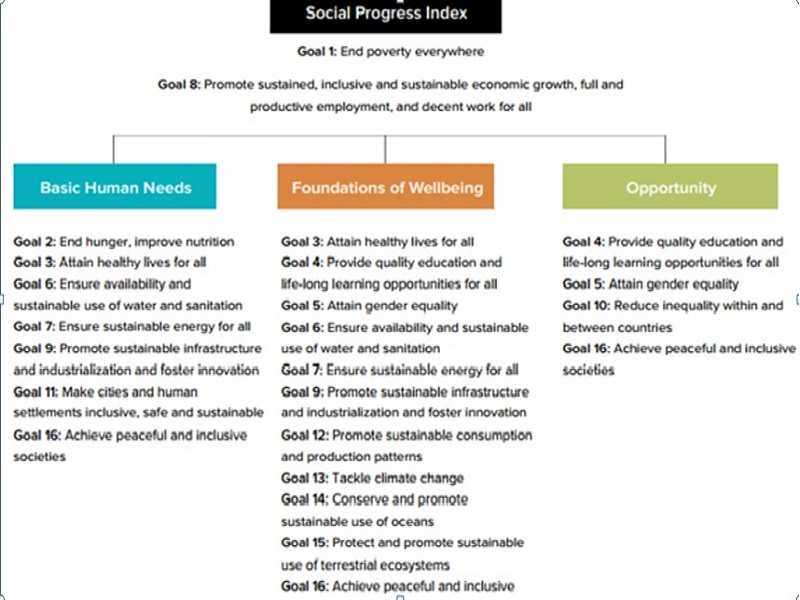 
Advertisement
The SPI by aggregating indicators across all the dimensions provides a holistic measure to benchmark the progress reached on the sustainable development agenda of the UN. While, the world scores 61 on a scale of 100 on social progress, there exists a wide diversity in the social progress levels reached across the world, with countries falling under the category of “Low Social Progress” and “Very Low Social Progress” being the countries of concern for achieving the new SDGs for 2030.

Looking at the SPI performance for India, which has been classified as one of the low social progress countries, it has been observed that while India performs well in terms of Nutrition and Basic Medical Care and Access to Basic Knowledge, it lags behind in many other critical aspects of development. For instance, in 2015, only 36 per cent of the population had access to improved sanitation facilities and about 26 per cent had access to piped water. Moreover, due to excessive freshwater withdrawals India is currently facing high water stress levels. In addition to this, about 25 per cent of the population does not have access to electricity, along with a poor quality of electricity supply to the rest of the masses. Further, India has low tolerance for all the members of its population, making it socially less progressive compared to the other countries. For instance, India has been ranked 128th in 133 countries on tolerance for immigrants from other countries. ( http://www.socialprogressimperative.org/)

Understanding the pressing need of fostering social progress for India, the current Narendra Modi government has implemented a development strategy that is closely aligned with the recent UN’s sustainable development agenda. One of the most striking initiatives undertaken so far have been “Make in India” drive having intent of propelling domestic manufacturing growth along with spurring foreign direct investment, job creation and innovation in sectors such as automotive, defense manufacturing, electronics, mining, pharmaceuticals and renewable energy. In addition to this, initiatives such as “Digital India” and “Smart Cities” have committed to providing best in class infrastructure and smart solutions to its people such as smart energy systems, green transportation and smart buildings intended to save energy usage.

Further, as India accounts for about 50 per cent of the world’s open defecation, Government of India and the World Bank have also signed a US$500 million credit for the Rural Water Supply and Sanitation (RWSS) project in the states of Assam, Bihar, Jharkhand, and Uttar Pradesh. This complements the popular “Swachh Bharat Abhiyan”, national campaign by the Government of India to clean the roads of the country. Several other programmes that would enable India to achieve higher social progress include “Atal Mission for Rejuvenation and Urban Transformation” which proposes housing for all by 2022, and “Skill India” initiative which proposes to empower about 40 crore individuals with skills by 2022. Moreover, to drive innovation and the related growth, which is essential for sustainable development, Modi government has also taken steps to promote intellectual property rights within the country. A national Intellectual Property Rights (IPR) policy has been formulated which suggests providing tax benefits to the IPR creation.

On the front of environmental sustainability, which has been another area of concern for sustainable development of a country, in the World Climate Change Conference (COP21) held in Paris in 2015, India has shown its support along with 176 other countries so far by signing the climatic change agreement which proposes to reduce greenhouse gas emissions and limit the global rise in temperature to 1.5 degree Celsius.
Thus, while several efforts have been taken up by the Indian government towards a more sustainable development growth path, it must be realized that to achieve the global goals, the world’s social progress score would have to reach atleast 75 out of 100(Report by Deloitte UK and Social Progress Imperative), which is possible only if all the countries, irrespective of their current level of economic growth overperform on social progress. One of the countries worth highlighting here is Costa Rica, which has achieved a SPI score of 77.88 with a GDP per capita of only $13, 431 per annum. While, several social indicators are positively impacted by economic prosperity, indicators on the front of health and wellness, rights and freedom, tolerance and inclusion and environment have a weak correlation with GDP, thus highlighting the necessity of prioritizing such dimensions directly so as to achieve the desired social progress score for the UN’s SDGs for 2030.
Advertisement