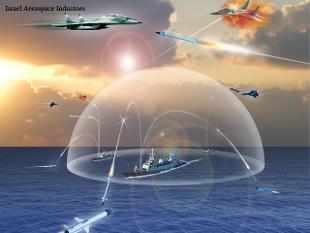 Advertisement
Last week, the multi-purpose missile system, jointly developed by India and Israel, was successfully tested. Just when the world was absorbing its success, rumours float the air of possible deals worth billions of dollars.

"In addition to India and Israel, which are procuring it, other armies around the world have signed with IAI (Israel Aerospace Industries) to procure the advanced system. Assembly line production of the missiles and their accompanying systems has already begun", IAI Programme Director for Air & Missile Defence Systems Boaz Levy told Globes business daily.

"The recent trial has given the system a substantial boost among countries that are still considering whether to procure it, and we believe that in the coming years, we will increase the number of signed contracts for its procurement. This is the spearhead of the defence systems, and a key growth engine for us," Levy said.

Representatives of Defence Research and Development Organisation (DRDO), an equal partner in the joint venture right from the outset, also participated in the recent trial with the next test of the system likely to happen onboard Indian naval vessel INS Kolkata in December this year, defence officials here told PTI.

The missile system is being jointly developed by IAI, DRDO, Israel's Administration for the Development of Weapons and Technological Infrastructure, Elta Systems, Rafael and other companies.

The missile system is being jointly developed by IAI, DRDO, Israel's Administration for the Development of Weapons and Technological Infrastructure, Elta Systems, Rafael and other companies.

Sources involved in the development of the missile system told the business daily they believe that the Israeli Navy will be able to declare it operational within a few months.

A Barak-8 battery, including the Adir radar system made by IAI subsidiary Elta Systems, a command and control system, and the missile launchers, is already installed on the deck of Israeli Navy ship Lahav, from which the new interceptor was fired last week as part of a complete trial of the system.

"All of the instruments related to the weapons system had been tested in the recent trial at the height of which an interceptor missile had been fired from the Lahav's deck," Levy was quoted as saying.
Advertisement

"The missile was aimed at a UAV simulating an enemy target. The system's radar spotted the threat, monitored it in flight, and the data were transferred from it to the Barak-8 command and control centre, which launched the interceptor missile at the UAV.

Using its homing-in device, the missile aimed itself at the target, made an accurate hit, and destroyed it completely. The missile blew it into fragments. The Barak 8 system, including all of its components, successfully met all the objectives set for it," Levy said.

The trial focused on the system's capability in its naval application and the interceptor missile launched at the target was simulating a deep-sea target.

IAI is also testing land-based applications of the system.

The radar and command and control systems stationed on land are said to have also successfully identified and monitored the target, and calculated its trajectory, but did not launch an interceptor missile at it.
Advertisement

The Barak 8's interceptor range is said to be 70 kilometres, making it capable of handling several threats posed against Israel's defence, including missiles like the Yakhont which the Israeli army believes is a part of Lebanese Shia militant group 's arsenal and can be used to hit Israel's ports, navy ships, merchant vessels, and Mediterranean natural gas facilities.

Professional sources told the Globes that Barak-8 is also capable of providing a solution for surface-to-surface missiles and accurate rockets possessed by Hezbollah that threatens infrastructure facilities in Israel and essential Israel Defence Forces (IDF) bases all over the country.

Barak-8, an upgraded version of the missile Barak system already being used by India and Israel, is designed to defend naval vessels against incoming missiles, planes and drones.

India's Bharat Dynamics Limited (BDL) will be assigned the task of producing the missiles with 32 initial ones to be fitted on INS Kolkata.

Israel made MF-STAR radar system, which is capable of simultaneously tracking hundreds of airborne targets to a range of more than 250 kilometres, adds value to the marketing potential of the new system.
Advertisement