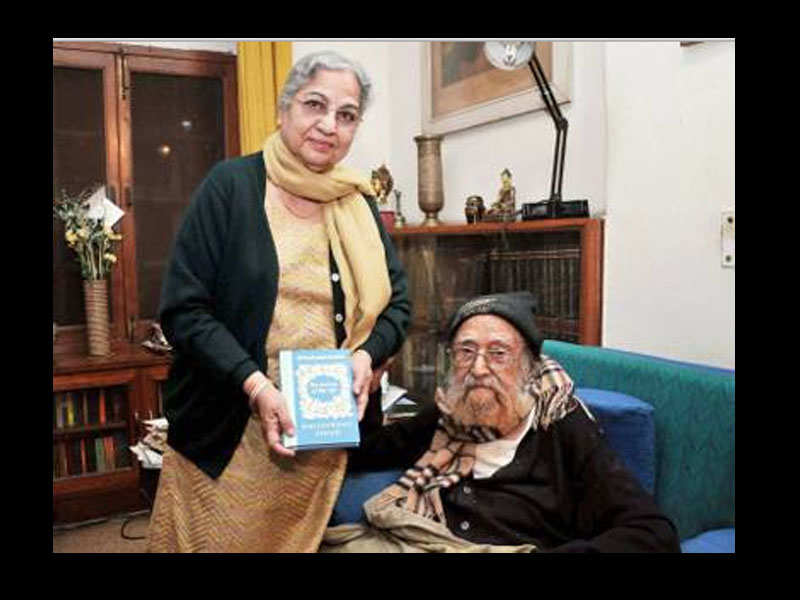 NEW DELHI: Noted Khushwant Singh passed away on Thursday. He was 99.
Advertisement

Singh was best known for his trenchant secularism, his humour, and an abiding love for poetry.

"He was fine and passed away peacefully at home on Thursday," his daughter said. His cremation will take place at Lodhi Crematorium at 4pm today.

Born on February 2, 1915 at Hadali, now in Pakistan, Singh wrote classics like "Train to Pakistan", "I Shall Not Hear the Nightingale" and "Delhi".

Advertisement
He was a lawyer-turned-diplomat-turned-writer. His autobiography, "Truth, Love and a Little Malice", was published by Penguin Books in 2002.

He was editor of several literary and news magazines, including the Illustrated Weekly of India as well as two newspapers, the Hindustan Times and the National Herald, through the 1970s and 1980s.

In 2007, he was awarded with the Padma Vibhushan.

Oh no Khushwant Singh is no more. He made our lives so much richer by his literary contributions. “With Malice towards one and all” RIP

Khushwant Singh. End of an era. Only KS could say 'There's no condom for a pen." And prove it!

If you haven't read Khushwant Singh's columns, novels or stories, you're missing out on a sizeable chunk of top notch Indian literature

RIP Khushwant Singh - bet he will be telling jokes in heaven.


Read also: Vinita Dawra Nangia's blog, dated November 3, 2013 - Be true to your self, is Khushwant's lesson


Rip Khushwant singh! End of an era! Find memories of train to Pakistan n t bond I shared with him! Wil miss u!

Khushwant will be remembered for this great history of the Sikhs. He was a very generous man. His bravest act was to take on Bhindranwale...


Singh, who was a Member of Parliament from 1980 to 1986, was awarded with the Padma Bhushan in 1974 but returned the decoration in 1984 in protest against the storming of the Golden Temple in Amritsar by the Indian Army.

He is survived by son Rahul and daughter Mala.

(With inputs from AP)
Advertisement
NewsletterSIMPLY PUT - where we join the dots to inform and inspire you. Sign up for a weekly brief collating many news items into one untangled thought delivered straight to your mailbox.
CAPTCHA: