Life of women artists in a country that exiled MF Hussain 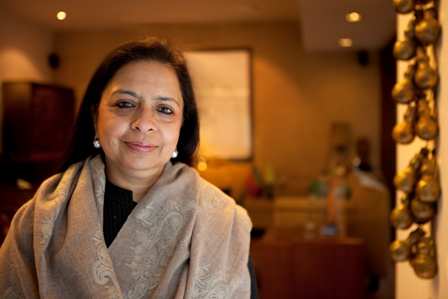 Advertisement
From fighting against the inhibitions of a housewife coming into arts to sharing intimate memories of life at a pan India show, have evolved much faster than the medium itself. To celebrate this journey, renowned collector is hosting first of its kind show at her called ‘Diaries Entries’. This show brings together five different generations of women artists- Nilima Sheikh, Paula Sengupta, Benitha Perciyal, Sheba Chhachi, Hemali Bhuta, who explore different art forms too.

While rejoicing her 26 years of experience in art, Renu still feels threatened by the regressive emerging political ideologies against freedom of art. These fanatics drove MF Hussain, a family friend of Renu and her greatest inspiration, out of the country!

“Sometimes it does happen that one can’t do what he/she wants to do. One is always weary of the physical damage that these fanatics can do to my physical space,” she said.

She accepted that she does think twice before putting up a piece of art in my gallery, especially after the Bhupen Khakkar incident. The artist, much to his dismay, had to make changes to his art as he was violating the ‘Flag code’ in his wooden sculpture.

As art is the representation of present times, Renu added, “In the present times, it is very difficult to draw the line between vulgarity and freedom of art.”
Advertisement

And, if ever a time comes when some people would come and tell me to take down an art from my show, she said she would agree to their whims. A strong statement made by a person whose mentor was exiled from the country.

“I won’t do it because there is no point in creating another controversy. It will harm art in the long run. If there is too much of risk, I won’t show it,” she said.

Even after all these imaginary obstacles created by people with political interests, women artists have braved them all and come out and conquered every aspects of art, from canvas, drawings, sculptures, embroidery, video, photography, poetry to graphics. More women have joined the force with much bolder expressions on canvas. They have even started exploring socio-political art.

Benitha Perciyal, a woman artist of present times said she is lucky enough that her family supported her.

“But, yes. The society still doesn’t see art as a mainstream career option,” she added.
Advertisement

Spreading more awareness of art and to buy art and to collect art just for art’s sake is what Renu wants the space to experience in the future.

“There should be more knowledge building, more education and more institutions to support art,” said the art lover.
NewsletterSIMPLY PUT - where we join the dots to inform and inspire you. Sign up for a weekly brief collating many news items into one untangled thought delivered straight to your mailbox.
CAPTCHA: