Moinak Mitra
Aug 8, 2014, 13:59 IST
In 2006, two freshmen from IIT-Delhi gathered enough spunk to knock at the door of Kalyanaraman Srinivasan, Amazon’s global technology head for retail, who was in India to set up a development center at Chennai and a regular at the Bangalore office of the global ecommerce biggie. The duo requested fifteen minutes of ‘we-time’ as they bubbled over a few ideas they considered path-breaking. They wanted to know which one they should focus on. “I took 1.5 seconds and said if they really wanted to be entrepreneurs, they must replicate Amazon in India and be patient about it,” says Srinivasan, in a southern accent cradling a Midwestern twang. The duo turned out to be Sachin Bansal and Binny Bansal who founded Indian ecommerce giant Flipkart the very next year, recently raising a billion dollars from investors to take on Amazon’s Indian foray.

Srinivasan’s advice bode well for the youngsters and made them very rich indeed but the operative word was “patient”. Despite zero signs of profitability in the ecommerce eddies, Srinivasan remains positive. After all, more than 20% of the GDP of the world comes from emerging markets with barely 3% of capital investment therein. In other words, there are not many tradable liquid securities out here, he reasons, adding that companies like Flipkart, Snapdeal and Infibeam, where he has personally invested, will raise the tide. 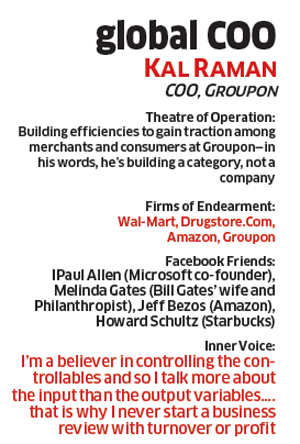 “The rising tide will raise all the boats first and every company will get irrational valuations but those who focus on customer experience in the long term, will stay there and go higher, and those who don’t, will fall off,” says Srinivasan. As a precursor, he points to the dotcom boom in the US in 1999-2000. “Trillions of dollars went into valuations there but the customer experience only got better…so the irrationality of valuations is relative,” he points out, observing the Indian ecommerce market potential to be in the $100-200 range and with only $6 billion active market, excluding train and flight tickets, Flipkart’s valuation of $5 billion makes perfect sense.

Advertisement
Today, the 44-year-old Kalyanaraman Srinivasan is Chief Operating Officer, Groupon, a portmanteau for group coupon, and at one time, the fastest growing company in the world that grew from $1 million in seed money to $1 billion in two years. On a whistlestop tour covering Korea, Hong Kong, Singapore and India, he met up with CD in the Delhi office of Groupon, housed in a rundown commercial complex in the southern part of the capital city. That’s where, over cuppa and crackers, he deconstructs the journey of a 15-year-old from poverty to power, politics at the workplace, lessons from Sam Walton, problem-solving from Amazon to startups, and how somewhere in between, he came to be known as Kal Raman.

Born and raised in Mannarkoil in Tamil Nadu’s Tirunelveli district, down south of Chennai, Raman’s father, a tehsildar, passed away when he was all of 15. The family of four siblings struggled through the odds on his mother’s monthly pension of Rs 420. She was, however, uncompromising on her children’s education. That explains how liberally Raman uses this phrase—“Education is salvation.”

Advertisement
After high school, Raman got through both medical and engineering college. While the medical college stood in his district, he opted for engineering in Chennai where he knew nobody. “I wanted to see how far I can fly,” he reminisces. Till today, Raman has a knack of making the tougher choice. It’s as if he’s conditioned that way. “The longer it takes to get something, the longer it stays with you….most of the things that look easy, are not good in the long term,” he says.


Not quite okay, Tata

Raman’s first job was in Mumbai with Tata Consulting Engineers, where he landed up in slippers on his first day at work, sending his boss into a fit of rage. Upon hearing his story, he was not only given money to buy shoes but also fixed up at his friend’s Mumbai residence. Within a month, his boss sent him to Bangalore where he computerized the entire office administration. Thus started Raman’s steady rise in the world of information technology, and he did a lot of learning on his own, including ‘C’ programming. Just as he was about to get confirmed, he gave in his resignation since he signed up with TCS at Chennai. As a code jock, he ended up in Edinburgh servicing the Scottish Equitable Insurance Company and that’s where the first signs of friction with his boss became evident.

As Raman deep-dove into the world of insurance, he figured the mathematical model of the company was completely flawed—if the company had more than 15% reimbursement, the resultant number would be a big negative, while the marketing documents of the company said that people would get 23% redemption. He tried explaining it to his boss but got cold shouldered.

Raman would come in late and work well into the night. Being the last to leave, he was noticed by someone by the name Chris, who asked him why he stayed up so late despite being a programmer from an outsourced company. Upon being told of a questionable business model, Chris got curious and stayed up with Raman till 2 am one morning. A few days later, as Raman came in to work, his boss was pacing up and 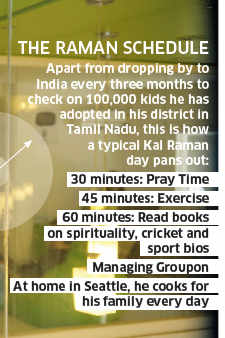 down the room and glanced at him menacingly. He said that the European general manager of TCS had been called by the company and they were all going to see the management and that it concerned him. “If I were you, I would have packed my bags for India,” the boss said. Eventually, the trio entered a room with suits and at the head of the table, Chris sat in bespoke CEO attire. Before a word was uttered, Raman’s boss started making excuses and virtually disowned him, labeling him as a rotten apple in the TCS pantheon of “good and loyal workers”. That’s when Chris got up and silenced him, explaining why TCS needed to hire more people like Raman. “What my CPO and CIO couldn’t solve, a 22-yearold has done, and I thought it to be pertinent to acknowledge it in front of his bosses,” he said.

For Raman, there was no looking back. With the help of Chris, he applied to companies in the US and got through Wal-Mart, where he rose to become the giant retailer’s technology director within a year. In fact, he admittedly got promoted 18 times that year from the lowest employee to the top rung, catching the eye of Wal-Mart promoters Sam and Rob Walton. He also picked up the invaluable lessons of long-term planning and customer-centricity from Sam Walton, the father of modern retail. That’s where Raman learnt business execution under his mentor, Doyle Graham, who again passed away at 45, exactly the age his father had died. Orphaned twice, Raman had no will to forge on. He hung around for six months before signing up with Blockbuster, the biggest DVD rental company then and as he predicted its doom, which eventually paved the way for newbies like Netflix, he started out afresh as CEO of drugstore.com. At Drugstore, he had an enviable board of directors, which included among others, Microsoft co-founder Paul Allen, Bill Gates’ wife and philanthropist Melissa Gates, Starbucks’ Howard Schultz and Amazon’s Jeff Bezos.


He ran Drugstore through the tumultuous 9/11 years as corporate America took a beating and share prices tumbled. When his recovery plan was rejected by the board, Raman knew it was time. However, Bezos sought him out and wanted him to go to Seattle to take a shot at some of the problems at Amazon. Raman, of course, chose the toughest one to crack—the non-media businesses were growing faster than media and Amazon was losing $200 million worth of free cash flow back then. He identified the problem and automated the entire retail infrastructure to solve it at one go. At that juncture, there were 6,000 people working at Amazon and he had 3,000 under him. Mission accomplished, Raman moved on to start his own venture Global Scholar with venture capitalist Michael Milken until selling out in 2010 and signing up as COO of Groupon in May 2012. “Now I joined Groupon when everyone wrote the company off and I love being the underdog,” he says.

In 2012, Groupon’s international business was crumbling and it was left to Raman to steady the ship. Today, along with the domestic US business, the international division is in the black. “We are building a category, we are not building a company…. what Groupon is now, Amazon was in 2001,” he says.

As he pumps in adrenaline to the business, Raman has a roadmap. He’s applying all that he learnt at Wal-Mart, keeping the merchant community engaged and customers happy by offering the lowest prices and an efficient delivery mechanism. Will he be able to pull it off? “We’re more worried about the long term and so we’re trying to get more efficient by passing off the savings to our merchants and customers so that they become more loyal to Groupon and check our website first before they go for any other transactions….we have about 1,600 people in technology to do that out of 12,000 worldwide,” he says. At $2.5 billion revenue and with zero debt, Raman’s optimism is well-founded. And while valuations like $8 billion scorch the terrace, he maintains a straight face and waits for the tide to raise the boats. What then, after he steers Groupon to the safe shores of supra-growth and profitability? “I’ll do something very big in education in India, with or without Groupon,” he says.