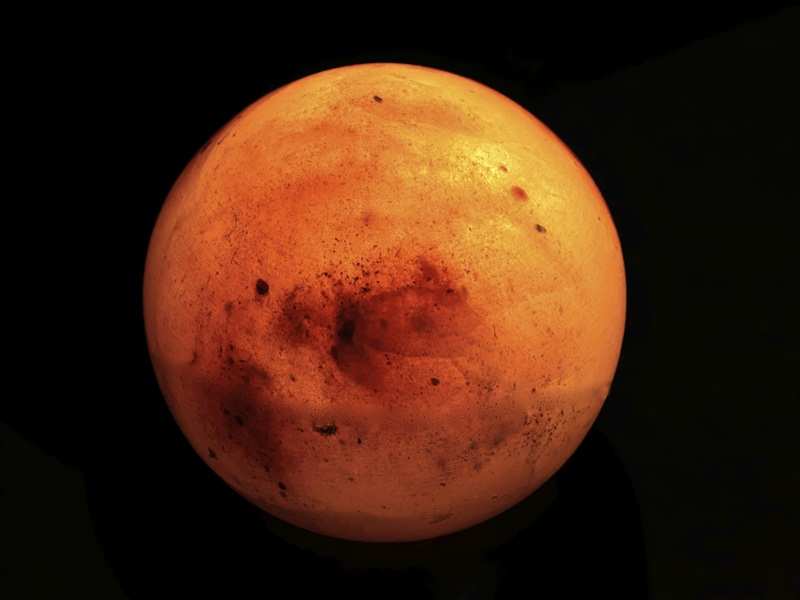 A spacecraft orbiting the Red Planet has discovered a huge new on the surface of , spanning half the length of a football field.

NASA's powerful (MRO) captured the image of the new Martian crater. The crater was first tracked on March 28, 2012. The impact that created the largest crater was likely to be preceded by a blast in the Martian sky.

The explosion was caused by intense friction between an incoming asteroid and the planet's atmosphere. This series of events can be likened to the explosion that cracked windowpanes in Chelyabinsk in Russia, last year. The blast also darkened an area of the Martian surface spanning around 8 km.
Advertisement

Scientist Bruce Cantor noticed an inconspicuous dark dot near the equator in one of the images about two months ago. Cantor was doing his usual weather monitoring work when he saw the black dot. He said that the dot looked usual, with rays emanating from a central spot.

Cantor began examining earlier images. He also checked other images from about 40 different dates, and pinned down the date the impact event occurred. He finally reached the conclusion that the spot was not visible till March 27, 2012, and then appeared suddenly before the daily imaging on March 28.

The Martian crater is slightly elongated and spans 159 ft/143 ft.
Advertisement
Image: Thinkstock
NewsletterSIMPLY PUT - where we join the dots to inform and inspire you. Sign up for a weekly brief collating many news items into one untangled thought delivered straight to your mailbox.
CAPTCHA: