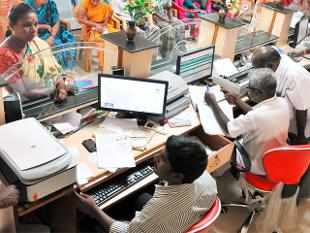 Advertisement
People belonging to minority communities of , staying in India on a Long Term Visa, will soon be allowed to buy property, open bank accounts and get PAN and Aadhaar cards, with the planning to roll out special facilities for them.

Among other concessions the BJP-led government is all set to offer them include reduction in fees for registration as citizens of India from Rs 15,000 to as low as Rs 100.

Though the exact number of minority refugees from Pakistan, Bangladesh and Afghanistan living in India is not known, according to rough official estimates there are around two lakh such people, mostly Hindus and Sikhs.

"The central government has been constantly reviewing the hardships being faced by the minority communities in Pakistan staying in India on LTV. To ease some of their difficulties, it is proposed to provide the facilities," a notification issued by the Home Ministry says.
Advertisement

Issue of driving licence, PAN and Aadhaar cards, permission to take up self-employment or for doing business which is considered safe from security point of view, dispensing with the requirement of personal appearance before the Foreigners Registration Officer for registration are a few other facilities being planned.

Permission for transfer of LTV papers from one State/ UT to another State/ UT, waiver of penalty on non-extension of short term visa/ LTV on time, permission to apply for LTV at the place of present residence in cases where the applicants have moved to the present place of residence without prior permission are some of the other highlights.

It has also been proposed to simplify the procedure for grant of Indian citizenship to such nationals belonging to minority communities in Pakistan.
Advertisement

Collector, Deputy Commissioner or the District Magistrate will be empowered to authorise, in his absence, in writing an officer not below the rank of Sub-Divisional Magistrate for administering the oath of allegiance to the applicant.

Powers will be given to the Collectors or the District Magistrates of a few select districts in Chhattisgarh, Gujarat, Madhya Pradesh, Maharashtra, Delhi, Rajasthan and Uttar Pradesh for a period of two years for registration of such Pakistani nationals as citizens of India.