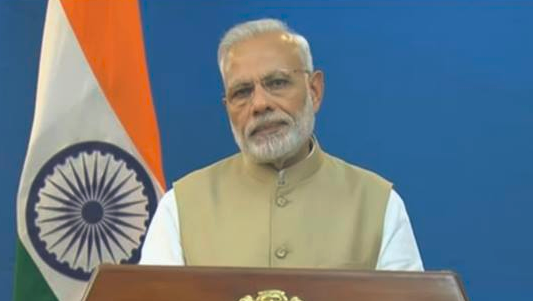 Prime Minister took to LinkedIn and once again appealed people to turn towards .
Advertisement

Since the announcement of on Nov 8, banks have been working overtime to provide new currency notes to people. However, the lines outside the banks and ATMs are getting bigger, providing no respite to the common man.

Finance Minister has said the demonetisation effect will stay for at least one or two quarters.

The demonetisation move wiped out 86% of the cash from India overnight as Rs 500 and Rs 1000 were announced as illegal tenders.
Meanwhile, Modi appealed that large volume of liquid cash leads to corruption.

"In 21st century India, there is no place for corruption. Corruption slows down growth and takes a toll on the dreams of the poor, neo-middle class and middle class," he wrote in an article posted on Linkedin.com.
Advertisement

He said all young men and women should inspire others to turn cashless and this will set the strong foundations of an India where there is no place for corruption and black money.

"Today we live in an era of mobile banking and mobile wallets. Ordering food, buying and selling furniture, ordering a taxi...all of this and lot more is possible through your mobiles. Technology has brought speed and convenience in our lives," he added.

Along with the article, he posted pictorial references to cashless options like credit cards.

"I am sure most of you are using cards and e-wallets regularly but I thought I must share with you ways through which increased cashless transactions are possible," he said.
Advertisement

Modi said the November 8 decision offered "a unique opportunity" for small traders, who have a central role in the economic transformation of India.

"Today, our trading community has a historic chance to upgrade themselves and embrace more technology, which will bring greater prosperity," he said.

The Prime Minister said over the last few days, he had opportunities to travel to rural as well as urban areas in Uttar Pradesh, Karnataka, Goa and Punjab. "Wherever I went, I asked the people - should corruption and black money be eliminated? Should the poor, neo-middle and middle class get their due? The answer I got everywhere was a resounding yes!"
NewsletterSIMPLY PUT - where we join the dots to inform and inspire you. Sign up for a weekly brief collating many news items into one untangled thought delivered straight to your mailbox.
CAPTCHA: