Sriram IyerNov 6, 2019, 22:19 IST
The Narendra Modi government will provide ₹10,000 crore through a special window to revive stuck housing projects. This fund will be structured as an alternative investment fund under . The country's largest bank, the State Bank of India (SBI), and the state-owned insurer, the Life Insurance Corporation (LIC), will bring in additional funds, taking the initial corpus to ₹25,0000 crore.

This will provide relief to thousands of aggrieved home buyers who have been waiting anxiously for their homes to be delivered because the builders have run out of cash. "There are over 1.600 housing projects, and 4.58 lakh housing units, that are stalled," said as she unveiled the latest decision by the Union Cabinet.

Even projects that have defaulted on loans will be eligible, contrary to expectations in the run up to the decision. "Any project that has not been sent for liquidation by the bankruptcy court are also eligible" Sitharaman said. The fund is largely targeting middle and low income housing projects whose net worth is in the positive. 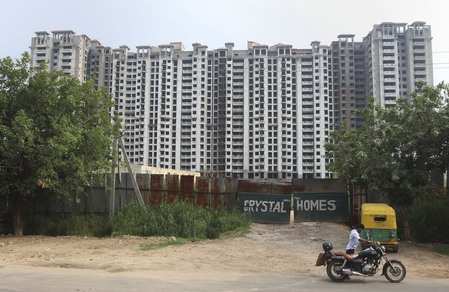 
"80% of all stuck housing projects will benefit from this announcement," Samir Jasuja of PropEquity told a television channel. According to Jasuja, out of the 4.8 lakh housing units, nearly 3 lakh units are either in the national capital region around New Delhi or in the Mumbai Metropolitan region.


The fund provided to developers will be kept in an escrow account— the money cannot be used by the developer for anything other than the construction of the project itself, nor can the bank use the money to recover earlier dues, the minister clarified.

The calculation of net worth will be specific to the project, not at the company level. "If there are three towers in a project, and one of them is 70% is complete, and the other two haven't started yet. The money will be available only for the tower that is 70% complete not for the other two," Sitharaman explained. For instance, if the project needs ₹400 crore for completion, the money will be released to the escrow account based on milestones in completion.

The real estate sector has already welcomed the decision when it was being discussed as a possibility.

Finance Minister Nirmala Sitharaman also said that the government is inviting other foreign funds and sovereign funds to invest in the fund, over and above the initial ₹25,000 crore from the government of India, SBI and LIC.

"I rather retrieve projects that are awaiting resolution at the NCLT (National Company Law Tribunal), get them out of there," Sitharaman said explaining the structure of the rescue fund.