Advertisement
Navdeep Yadav
May 26, 2020, 14:41 IST
Ten rupee coins in Bangalore . which are refused by public and vendors . (Story pics. ).Currency.BCCL
Advertisement
The coronavirus lockdown hasn’t been easy on India or its 29 states and seven union territories (UTs). Their overall productivity — the gross domestic product (GDP) — is estimated to have taken a hit of ₹30.3 lakh crore, according to a report by SBI Research. This is a dip of nearly 13.5% of the overall GDP that SBI attributes directly to COVID-19.

The worst-hit are the orange and red zones where economic activity came to a near standstill during the nationwide lockdown. Green zones, on the other hand, remained relatively sheltered as most areas were allowed to remain functional. “The combined loss of orange and red zones is around 90% of the total loss. The loss in the green zones is the least, as 80% of the population in this zone is located in rural areas which are almost open for all activities,” said SBI’s report.

The three states which have reported the highest number of coronavirus cases, are also the three that have shown the biggest loss in their gross state domestic product (GSDP). Maharashtra with 52667 cases has lost 15.6%, followed by Tamil Nadu at 9% and Gujarat at 8.6%. “The top ten states accounted for 75% of total GDP loss,” said the report.

Simply put, GSDP is a measure of the volume of all goods and services in monetary terms produced within the boundaries of a state or UT. “As per our estimates, FY21 GDP growth would be now around –6.8%, and FY21 GVA [gross value addition] growth would be around –3.1%,” forecasts SBI Research.

SEE ALSO: Dabur Chyawanprash was in the minds of immunity-seeking Indians amid COVID-19 lockdown⁠— the earnings will show if they bought enough of it 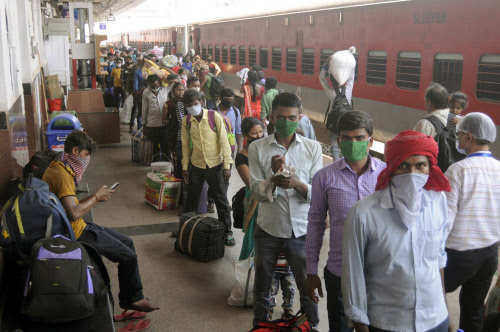