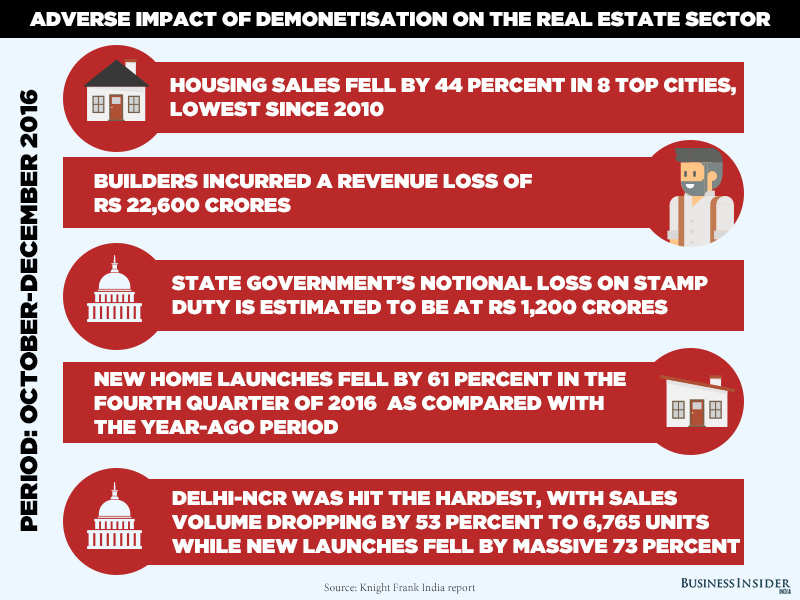 India's housing market was among one of the sectors that took a big hit when Prime Minister shocked one and all scrapping Rs 500 and Rs 1000 notes as legal tender.

While it was known that demonetisation would adversely affect the property market, what we weren't aware is the extent of the damage caused.

Advertisement
According to a report, Demonetisation brought the housing market to an absolute standstill during October-December last year, with the Delhi-NCR market hit the hardest.

Sales volume dropped by 53 percent to 6,765 units in the fourth quarter of 2016 while new launches fell by a massive 73 percent in Delhi NCR.

Knight Frank which tracks the primary housing markets of eight cities -- Delhi-NCR, Mumbai, , Chennai, , Hyderabad, Pune and Ahmedabad also observed that sales fell by 44 percent in these eight cities, which is not only the lowest level since 2010, but also resulted in a revenue loss of Rs 22,600 crores to the builders.

Advertisement
Moreover, the report also stated that new home launches fell by 61 percent to 24,316 units in the fourth quarter compared with the year-ago period.

As it turns out, housing sales had gone up in the first nine months of 2016, but 'the government's decision to scrap the Rs 500 and Rs 1,000 notes in early November pulled down the housing sales in the fourth quarter as well as for the entire last year.' This had a domino effect as it led to developers refraining from announcing any new launches and buyers were extremely cautious before buying anything.

This resulted in the launches and sales of in 2016 being the lowest since global financial crisis.

Advertisement
Additionally, the report also estimated that Demonetisation had contributed to the state government's notional loss on stamp duty at Rs 1,200 crore.

To summarise, the is going to assume an even bigger importance when it comes to correcting the wrongs done to the real estate sector.

Next StoryEverything you should know about India’s economic growth in 2016, and the way forward
Advertisement
Popular on BI
Latest Stories
View All Latest
Trending News
Buying Guides
Advertisement
How ‘Make in India’ has improved India as a global leader in the manufacturing sector
China is still far ahead of India when it comes to Startups
SuperRare NFT sells for more than $2 million — a 20,000-fold increase in value over three years
Popular Categories
Trending Right Now